Narratives of Causation, Structures of Reasoning

You can’t connect the dots looking forward. You can only connect them looking backwards, so you have to trust that the dots will somehow connect in your future.” Steve Jobs

In “Mind and Nature: A necessary unity” Gregory Bateson noted that – Science probes; it does not prove. Although, we often assert that some latest piece of research has proved some theory or hypothesis. To definitively prove something, we would have to verify all possible instances of a claim – for example to prove all swans were white one would have to show that all swans that have existed, currently exist and will exist are in fact white. This is impossible. 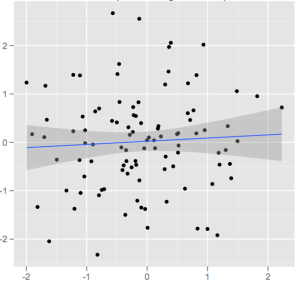 What science does do, however, is to assemble evidence that supports a claim that provides a more ‘reasonable’ explanation than any other and/or makes better, more precise predictions.

But rather than deep discussion of epistemology (how we know what we know), I want to explore how the way we frame our observations shapes the way we attribute causation, and therefore structures how we reason to form theories and explanations. Most of the time we observe a correlation—first X happens and then Y happens, and we want to explain why. We try to fit our observations of the sequences of events into patterns (stories) that make sense of what we think is unfolding.

Humans are driven to generate explanations for why things happened the way they did. That’s not to say that our explanations are unimportant – as Kurt Lewin says: “There is nothing more practical than a good theory”. Theories help us to determine what questions to ask. Theories are the way scientists create stories that link causes and effects into coherent wholes or systems. Understanding whole system is vital because the ‘causes’ derived as systemic properties are indirect and often very hard to track. The difficulty of understanding systemic causation is evident in the difficulty of people to grasp climate change. What a good story-as-theory can do is enable our mind to grasp complex cause in a way that is more like direct causation.

When our stories are well done they produce compelling, plausible and common-sense explanations of events. In this way we see that while data is fundamental – the data themselves will remain mute without some form of understandable theory. Theory and hypothesis generation in turn depends on honed intuition and creative imagination. It is story as theory, which provides the structure that shapes how we reason about a problem and the framework that makes a question appropriate.

The traditional scientific methods and approaches that relied on reduction to attain simplicity tend to be unsuited to understanding complex problems and systems. However, a paradox arises in the development of the various fields of research, study and application that constitute the sciences of complexity. These sciences have shown us that even a fully deterministic system can be essentially unpredictable due to sensitivity to initial conditions as well as a plethora of other reasons. For example, depending on different contexts, identical causes can produce different effects. Also there are some identical effects that can be produced by different causes. Despite knowing about these sorts of conditions of change – we continue to feel confident in constructing causal explanations all the while cautioning ourselves that correlation is not causation.

In our day-to-day lives we tend to explain a sequence that culminates in an outcome as cause and effect, after the outcome is already known, since we have observed a clear sequence of events. The explanation is often reduced to picking from a repertoire of common sense ‘causes’ that appear self-evidently true. We construct accounts that both make sense and seem like causal explanations. This is why hindsight can so often give us a clear sequence of events to which we can attribute causes and effects.

What this approach often misses is the range of possible alternatives that did not happen. We overlook the fact that there could have been innumerable ‘butterflies’ involved in what has happened and that these ‘butterflies’ could just as well have been different – and thus produced different outcomes. We mistakenly apply the seeming clarity of hindsight onto the future, in an effort to constrain the world of possibilities into a bounded ‘ink-blot’ upon which we can project probabilities.

It’s not as if there isn’t any regularity in the world – there is, and science will continue to enable us to observe reliable regularity and harness it. The point is that we must not confuse our capacity to determine robust regularity with causality – confusing effective know-how with the certainty of know-why. Most often, in order to observe and determine regularity we create arbitrary contained situations in order to manipulate a reduced set of observable variables until we have created reproducible correlations. But after we have developed these stable correlations – we still don’t know what will happen once we return our creation to the ‘wild’. This is especially true for the biological and social sciences.

George Lakoff (among a number of other cognitive scientists) has provided irrefutable evidence that argues that reasoning itself is not solely structured as a universal mathematical logic. What humans do when we think is use three cognitive capacities: we think in chunks (events, space, entities, predicates); we use frames (roles, situational relations); and inescapably we rely on metaphors (as cross-domain mappings – frame to frame mappings). With these cognitive tools we create narratives that frame sequences (often linked with emotions some form of moral stance). Narratives also allow us to enact simulations of our goals, satisfactions and frustrations. What Lakoff points out is that all words are defined in frames.

Lakoff notes that there is no language that has in its grammar a natural way to express systemic causation what exists everywhere are notion of if-then causality. This is also why so many people have difficulty understanding complex systems. Despite the best intentions of those practicing any form of science – the objectivity of science is inevitably vulnerable to particular structures of reasoning inherent in the chunks, frames and metaphors used to describe observations and formulate causation. Even the purity of mathematics requires metaphorical translations in order to apply its logical formulations to reality.

While Lewin’s observation of the utility of a good theory is without a doubt true, the relationship between the process of empirical observation and abstract theorizing remains an ongoing and intense arena of scientific and philosophical conversation. In general, what people are really good at is less about being ‘inherently rational’ and much more about an inherent ability ‘to rationalize’ – to apply forms of reasoning to make sense of things. In order to make the world sensible we can integrate even the most unpredictable surprise into coherent intelligible effects of previous causes.

While we are often capable of constructing an explanation of a causal sequence after an unexpected event has happened, it is often impossible to identify what will trigger such event ahead of time. The explanations that we create after an event can make the cause-effect sequences seem inevitable – but such explanations don’t tend to account for any number of equally possible outcomes that didn’t materialize simply because of chance. What happens in history and life are not randomized clinical trials with adequate control groups. As Stuart Kaufman has noted – life creates the conditions of its own becoming – and that means the future will always be one of Volatility, Uncertainty, Complexity, and Ambiguity.

Another key issue in the perception of causality is captured in the classic concept of gestalt of figure-ground relationship. Marshall McLuhan suggested that it is impossible to reveal the ground that makes visible the figure of our awareness, without making the ground we want to reveal a figure in itself, and thus creating an additional (and invisible) ground. What is required to make the ground visible –according to McLuhan it to construct an ‘anti-ground’ an anti-environment. The concept of ground (as a Gestalt figure-ground relationship) is a synonym for environment. One more point that McLuhan makes is the suggestion that whenever aground becomes the figure in social awareness, it is always perceived as a monster (I will be referring to this observation in following posts).

All complex and living system require some form of constraints. As Kauffman says below – constraints are what enable the release and harnessing of energy and information necessary to perform work.

Terrence Deacon makes a very comprehensive case that constraints (as causal agents) restrict or confine systems or situation with boundaries. Often they are not perceivable as what is visible – but have to be conceived as ‘what is not there but could have been’, as alternatives/choices that are unable to be undertaken. Constraints can arise inherently within a system or from its context. Dynamic systems are constrained within relevant degrees of freedom and tend to reflect attractor qualities.

The Internet of Things, the digital environment, the data-informational atmosphere are emerging as a new ‘ground’ of an emerging global civilization. I’m going try to understand the implications of the digital economy by exploring some of the seismic shifts in the ‘ground’ of our economy, which are also transforming our society. In the next few posts I will engage in what I believe is a plausible line of reasoning that can anticipation or at least let us imagine how information and identity are shaped by and shape fundamental social constraints. What I want to do is extend this line of reasoning in order to understand how the emerging digital environment is a new ‘ground’ that will shape or require a corresponding concept of self and construct of identity.

Why everything that seems obvious isn’t
http://everythingisobvious.com/wp-content/uploads/2011/12/PWOct11watts1.pdf

###
Searching for the pattern which connects …. and the difference that makes a difference
John is a Foresight Shaman, mytho-poet, and is interested in everything focused on the alchemy of cultural change. This article originally appeared in John’s blog here. Republished with permission of the author.