The Blind Leading the Blind — The End of Religion Misrecognized 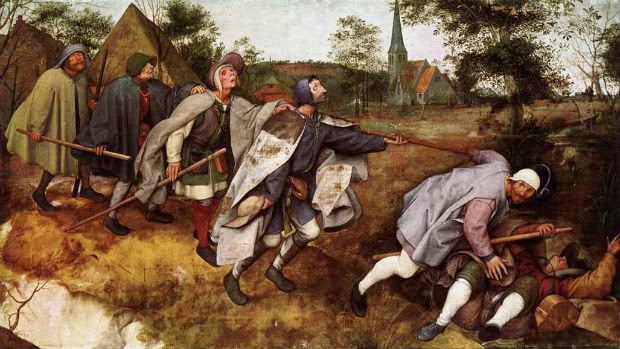 [Editor’s note: this is a response to a recent article, The End of Religion: Technology and the Future]

So much anti-religious dogmatism, so much misrecognized religiosity, so little time. It’s a wonder to me that some clearly sophisticated persons can express such unsophisticated opinions about religion. Maybe it’s just because we all have vested interests? On the one hand, those who have distanced themselves from tradition seek to justify their choice, as those who have continued to embrace tradition likewise would justify themselves. What’s to be made of the strange creatures, arguably not so uncommon now or ever, that reject any notion of the choice being all or nothing or even mutually exclusive? What’s to be made of emerging culture that would both conserve and discard tradition in various ways to various extents?

History is littered with dead gods, so we say. And yet those gods seem to keep resurrecting themselves or each other, in an ongoing theological evolution. From the earliest inarticulate longings for transcendence, through acknowledged superhuman projections, and perhaps on into recursively self-realizing aspirations of superintelligent creation: the past, present, and hopefully the future are littered with living gods.Will living gods endure? Will our descendants be too advanced to share such primitive beliefs? Maybe so, if we caricature the gods and their function as nothing more than supernatural superstition. On the other hand, will it ever be primitive to persist in trust that we can yet further transcend ourselves? If not, the gods will endure. Oh, they’ll surely change. They’ll evolve as they always have. And death or its analogs will continue to be part of evolution as they always have been. But intelligence, so long as it can, will continue to do what intelligence does: optimize across environments for its ultimate goals. And those goals are its gods, by any other name as divine — don’t like “divine” then go with “sublime” or whatever makes you happy while preserving the function.Some suppose that the relevance of religion relies on suffering and death, and that suffering and death will be eradicated by emerging technology. I share their expectations regarding the eradication of suffering and death, so long as they’re willing to qualify “suffering and death” with “as we experience them presently”. If they’re not willing to make that qualification, I’m confident they’re in for some serious disillusionment, assuming they live long enough. A world without the analogs of suffering and death, without goals and change, is no world at all. Nihilism lies in that direction.

In any case, in that superintelligent future, who will pray for solutions? Those who have moved on to new problems. Who will hope for grace from gods when science offers immortality? Those who recognize science can offer immortality without grace only to the extent it can offer a solution to the heat death of the universe without cooperation. Who will find their answers in ancient scriptures? Those who recognize new scripture informed of old scripture is always being written. It seems to me there will be plenty of praying for grace from gods into conceivable futures. But, but, but no one will call these things “scripture” or “prayer” or “grace” or “gods”? Meh. Those words have existed no longer than the age of the English language, and yet the phenomena they describe are uncontroversially far more ancient. Of course the words will change. That’s uninteresting. What’s interesting is whether and how and to what extent the associated phenomena will persist.

Those who point to technological assassination of God always do so in the most ironic way. God has been dying and will die, they say, because we will achieve all the powers we attribute to God. Uh. Ahem. Don’t they see?!? By supposing technology capable of endowing us with the power of God, they are supposing us capable of becoming functionally equivalent to God. Functionally, they’re appealing to the existence of God as an attempt to prove the non-existence of God! Squirm as they might, calling this “godlike” rather than “God”, the irony remains.

In overcoming present notions of suffering and death, we would not make ancient aspirations of how to achieve such ends irrelevant. In confronting apocalyptic risk, messianic wonder, and millenarian opportunity, religion does not somehow come to an end. To the contrary, we would simply justify those fears and hopes at last, as prophecies fulfilled! Did we come up with the idea that overcoming them is possible? Did we do all the work that led, step by step, to our present capabilities? Did the old gods not inspire our ancestors along the way? Are not the new gods inspiring us still? Abstracting across old and new gods, is not the living God always leading us toward transformation?

Okay, yeah. I get it. It’s easier to damn the old gods, misrecognize the new ones, and think lazily about function. But can we still, with a straight face, claim that prayer and ideology will not help? Can we embrace the reactionary anti-religious ideology without recognizing it as an ideology? Can we imagine the end of religion without recognizing such as a prayer? Can we raise our arms, stick out our chests, and pronounce moral obligation to relinquish religious beliefs with the fullest intent of provoking a communal strenuous mood to that end, and yet not recognize in our own behavior the persistence of the religious impulse?

Some of us manage to get away with this because we’ve somehow persuaded ourselves that religion is mostly or exclusively the silly and oppressive stuff that religious persons have thought and done. If a large group of persons support each other in thinking stupid thoughts, that’s religion! If a whole bunch of us wind each other up to hurt themselves or each other, that’s religion! If we come up with an organized way of opposing intellectual, technological, or moral progress then that, above all, that is religion!!! And yet no. Sorry. That’s not religion.

Yes, religion has been and is used to think and do stupid and oppressive and backwards and downwards. Yes, it’s been used to think and do such to greater extents than any of us is capable alone. And yes, it seems nothing can compare to the power of religion to inspire evil. Yet that’s just the point: power to inspire. Esthetic power. That is religion. And it has also been and is used to think and do smart and empowering and forwards and upwards. The same power that killed Platonic science in Athens elevated Platonic science in Rome. The same power that destroyed Aristotelian science in Christian Europe preserved it in Muslim Africa. The same power that tempted influential Arabs to dogmatism inspired influential Europeans to enlightenment. Religion may yet damn us. It is powerful enough for that. And it may yet save us. It’s powerful enough for that too. That’s because it’s not inherently good or evil. It becomes good or evil as we apply its esthetic power for good or evil. And in doing so, we amplify the good and the evil.

Religion is not the enemy of the future. Neither is it the friend of the future. Religion is simply, and quite powerfully, going to be part of the future, whether anyone likes it or not. So indeed, if we are to survive and progress, we had better figure out how to mitigate the risks and pursue the opportunities that religion presents. Leaving it to chance could be even more disastrous than leaving nuclear weapons or synthetic biology or molecular engineering or machine intelligence to chance. When we leave power to chance, we’re really just leaving it in someone else’s hands. And that someone else might not have our interests in mind or in heart.

So let’s learn through science, and let’s govern through ethics, not confusing either of these with religion or as being incompatible with religion. Let’s also reach deep into ourselves and broadly throughout time and space to make and find stories that move us together. Let’s embrace these stories, building redemptively from ancient aspirations, through cultural and technological evolution, and on into cosmic evolution, that fill us with enduring passion to act strenuously. Let’s adopt these stories that provoke us to nothing less than overflowing courage in the work to raise each other together beyond present notions of suffering and death to our transformation as radically compassionate creators. And let’s recognize these stories as our religion, both old and new, together pointing the way to our potential with, in, and as God.

Lincoln Cannon, MBA is the Director and President of the Mormon Transhumanist Association and one of the main exponents of modern religious transhumanism. He is also Director of Web Systems at Merit Medical. He has over fifteen years of professional experience in software engineering, Internet marketing and information technology, leading technical teams to success and satisfaction. The Mormon Transhumanist Association is an international nonprofit that promotes ethical use of technology and religion to improve the vitality of our world.