Interview: Alex Itskov on Transhumanism and Winning Wheel of Fortune

[Editor’s note: transhumanist Alex Itskov recently won televised and highly watched  U.S. game show Wheel of Fortune and briefly discussed transhumanism on air with well known host Pat Sajak. I got together with him for this exclusive interview.See prior coverage here.]

h+ Magazine: Hi Alex, I am curious about how became interested in transhumanism? Tell me a bit about yourself and your background.

Alex: As a child, I was always very much afraid of death.  As far as I can remember, I would be scared to go to sleep at night because of the fear that I would not wake up.  At the time, I couldn’t really comprehend the difference between sleep and death – they both appeared to be the same thing.  My phobia wasn’t triggered by any particularly traumatic event; nobody close to me had died… I was just puzzled by the unknown nature of death… and the apparent finality of it.  I couldn’t comprehend the notion of losing my consciousness permanently.

As I grew older and went to college, I began to study various philosophies, as well as more modern laws of science and physics.  The more I learned about things
like biotechnology and nanotechnology, the more promise I saw for extending human life in a profound way.  But it wasn’t until I discovered Ray Kurzweil that I truly started to believe that immortality was an actual scientific possibility.  Reading The Singularity is Near for the first time was like discovering the holy grail.  Everything started to make sense and I began to feel a hopefulness that I’d never experienced before.  Ray’s explanation of exponential growth and a “bridge to a bridge” made a believer out of me.  After that, I started to devour all of his writings, as well as theories/ideas by other transhumanist thinkers.

More recently, when randomly googling my own name, I came across the story of Dmitry Itskov, the founder of the 2045 Initiative, an organization that seeks to 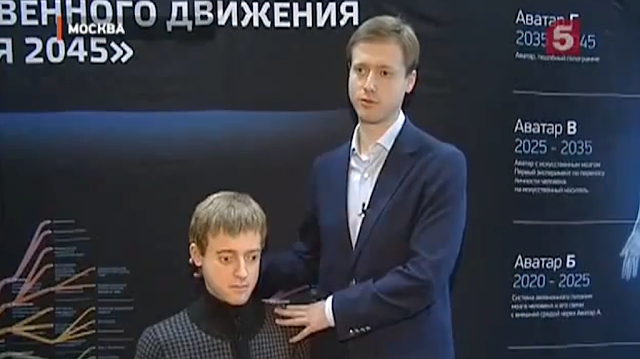 achieve human immortality by 2045.  I attended the GF 2045 conference in NY and met other like-minded individuals who were all interested in the same thing – eliminating the need for a biological carrier (i.e. a physical body) for our consciousness.  I finally got a chance to meet my hero (Ray Kurzweil), as well as other great minds like Martine Rothblatt and Aubrey de Grey; I watched speakers present valid scientific cases on the progress being made today with regards to radically extending human life, with the ultimate goal of mapping our consciousness into “the cloud”.  It was all very fascinating and today, I am more hopeful than ever that as technology advances at an exponential rate, we will continue to progress towards a world where we are our own masters and conquer biological death.

Ray Kurzweil opened my mind to a way of thinking that never seemed possible before.  His brilliantly simple outline of how the biotechnology revolution will lead into the nanotechnology revolution, which in turn will lead to the technological singularity, where machine intelligence is infinitely greater than human intelligence, just made sense.  Since reading The Singularity is Near around 10 years ago, I’ve watched advances in technology that fall right in line with his predictions.  More and more we are merging with our technologies and it’s only a matter of time where all of us are cyborgs in some way.  I just hope I can “live long enough to live forever.”

h+: What is your vision of the transhuman future?

Alex: I’m generally an optimist on the future.  I believe that advances in biotechnology will lead to cures for diseases at the genetic level, which will serve to vastly increase human lifespan.  From there, I expect advances in nanotechnology and 3D printing to change our society in a profound way.  I expect most of us to have nanobots inside of us that efficiently monitor our vital signs and keep our bodies fresh and healthy.  More and more, I anticipate that human beings will merge with their technologies.  Far from a Matrix style man-vs.-machine future, my vision is more of a man-machine union.  Machines will help make us healthier, smart, stronger and better at just about everything.  World records will be shattered on practically a daily basis.  3D printing will change the global economy to an entirely information-centric one.  I predict that nations will ultimately merge and borders will only exist as virtual presences.  More and more things will be available completely for free, which will dramatically increase quality of life for the average person. Eventually (probably in the next 50-100 years) I see human consciousness moving more into the virtual realm, where we will all exist as holograms and avatars in a universe of our own choosing.  We’ll be able to transplant ourselves instantly from place to place and interact with other forms of consciousness in a completely non-biological way.

My only concern along the way is a political one.  It seems that global leaders and nations aren’t paying nearly enough attention to transhumanist issues and technological advances.  Thankfully, it appears as though these advances are immune to political agendas, as the exponential growth continues regardless of who is in power.  Nonetheless, I will be putting my full support behind the Transhumanist Party and others like it, in the hopes of creating a mainstream discussion and diverting more resources toward the agenda.

h+: What led you to try out for Wheel of Fortune?

Alex: I’ve always been a huge fan of games shows, and my family and I make it a point to watch Jeopardy and Wheel of Fortune together each night as sort of a family bonding.  Over the summer, I sent in an audition video to the Wheel of Fortune casting department after my wife pointed out that I am a particularly skilled player.  I figured I had nothing to lose by doing so, and lucky for me they actually had an audition in Brooklyn a few weeks later, not too far from where I live. They contacted me to attend the audition and the rest is history.

h+: Did you tell them about being a transhumanist before appearing? What was the reaction?

Alex: Yes, I did!  In my application I stated that I planned on living forever (didn’t use the word transhumanist yet).  It was my way of getting noticed… my unique selling proposition.  At the audition, when introducing myself to the producers and the 100 or so others who were auditioning, I said it again – “I plan on living forever.”  The initial reaction was one of general amusement… most people think the idea is pure science fiction.  I briefly explained the idea of transhumanism at that time, discussing mainstream ventures like Google’s Calico, and the producers (as well as some of the other audience members) genuinely became intrigued.  At that point, I became labeled “the transhumanist”, which turned out well for me because I think that tidbit got me on the show.  On the day of the taping, when going over what we wanted to discuss with Pat, the producers were adamant that I mention transhumanism… I’m not sure if it’s because the idea is so far-fetched or if it’s genuinely intriguing.  Many people are still pretty misinformed about transhumanism (one friend of mine said he expected me to announce that I was born a woman!), so I did my best to simplify the idea during my interview.  If even one person googles “transhumanism” because of me and discovers ideas that give them hope and lead them to study science and technology, I would be genuinely overjoyed.

h+: At the end of the show Pat jokes the “We transhumanists have to stick together”. Did you discuss transhumanism or transhumanist issues with Pat? Good job!

Alex: Unfortunately, contestants on the show do not get to meet with Pat before or after the taping.  My only interactions with Pat were what you saw on TV, and a few brief chats in between commercials.  I have no idea if Pat Sajak is a transhumanist, but my impression is that he didn’t know what it was before I was on the show.  He did seem a bit intrigued by it, though.  Who knows, maybe he’ll be curious enough to learn more and become an ambassador for the cause!

h+: Did you employ any mathematics, training strategies or mind hacks to help you win? If you used nootropics or a brain implant possibly better not to mention them 🙂

Alex: The only real strategies I employed were a combination of game theory, studying the game and a generally good grasp of the English language and popular culture.  I studied which letters appeared most often in the regular games vs. the bonus round. I made sure to analyze various puzzle scenarios, e.g. if the category is ‘What Are You Doing?” then you can be confident that there is an –ING in the puzzle.  I made sure that I knew the optimal strategy for every scenario in the game (e.g. if I landed on the $10,000 Mystery Wedge, or the Express Round).  Basically, I just went in to the game fully prepared.  Unfortunately, nothing can fully prepare you for the nerves that come along with the experience, so I played far from optimally.  A brain implant may have been useful!

h+: Wheel of Fortune is estimated to have about 9 million weekly viewers so a decent estimate for this episode is 1.8 million viewers. You are now officially the most famous transhumanist in the United States. What’s next?

Alex: Well, I don’t know if I’m the most famous exactly, but I was very thankful to have had the opportunity to use my platform to promote a cause I believe in so deeply.  I’m nothing but an enthusiastic spectator in the transhumanist revolution.  There are thousands of legitimately brilliant scientists, engineers, programmers, etc. who bring this amazing dream closer and closer to reality each day. They have my utmost respect.  I will continue to take advantage of any opportunities that come along that allow me to promote the cause and educate people about the various benefits of the transhumanist movement, but I suspect my 15 minutes will be up soon.