Interesting Technology for Transhumanists at CES

CES 2015 featured a number of products and technologies which will be of interest to h+ Magazine readers and especially those interested in DIY, virtual and augmented reality applications, hacking, body mod & grinding, or H+ oriented product making, will find some items here of interest.

The Intel® Curie™ module is the first platform of its kind from Intel—targeting “always-on” applications such as social media, sports, and fitness activities. At its core is Intel’s first purpose built wearable SoC, the Intel® Quark™ SE SoC, that can run for extended periods from a coin-sized battery and features motion sensor, Bluetooth* radio, and battery charging capabilities.

Intel disclosed plans for the Intel® Curie™ module at CES January 6, 2015. Read their press release or FAQ. While the keynote demonstration just showed a step counting app, this looks like a good product for DIY personal enhancement projects. These can be placed inside clothing or wearables, and I won’t be surprised to see some intrepid individuals basing a new implantable device around Curie.

Robotbase Wants to Put an AI Robot in Every House

Robotbase is a 4-foot tall robot that sits on a wide base with a telescoping arm that holds its screen, camera and other sensors. What  sets Robotbase’s efforts apart is the sophistication of the software which incoporates deep learning neural networks and what they call “talents.” These are specialized apps that can be combined to create more complex talents. The robot can provide security, act as a telepresence robot, and more and includes an intelligent personal assistant. While this company has some interesting technology their marketing needs some work, for example, the suggestion that this robot could be a storyteller for “lazy” parents.

A number of companies at CES debuted and demonstrated wearables and health oriented wearable technology. These continue to be a mixed bag, with a wide range of fidelty, battery life, and capabilities. CES’ Digital Health Summit was co-organized by Dr. Daniel Kraft of Singularity University.

Zensorium is a device that is intended to help you track your moods throughout the day. The device features sensors that collect heart rate and blood pressure data. This information is then used to assign the wearer a mood — excited, stressed, normal or calm.

TempTraq an adhesive for monitoring a baby’s temperature and AmpStrip by FitLinxx are small sets of sensors tucked into a small adhesive package that sticks to your skin, like a Band Aid but with Bluetooth capabilities for sending the data from these sensors to a smartphone and  mobile app. The adhesive style wearable is a less invasive approach to many of the same functions envisioned for DIY implants and should be considered for the same applications.

Various wearables manufactures debuted fitness tracking products designed to look like conventional watches or jewelry, but with a twist. For example Misfit’s Shine device is a fitness and sleep monitor and can be worn as a watch or necklace.

Intel’s keynote also featured drones from  Ascending Technologies. Ascending’s systems feature a depth-sensing camera (made by Intel of course) to avoid obstacles while trying to find the shortest route from one point to another.

Another drone of particular note, Swiss drone maker senseFly’s forthcoming eXom drone, is a uniquely sensor-rich UAS for professional users that integrates visual and ultrasonic sensors in addition to the primary camera system and goes way beyond selfies.

The eXom is a light quadcopter that offers professionals such as civil engineers and surveyors the situational awareness they require to perform inspections and close mapping projects safely and accurately for example of bridges, buildings, or towers. To increase pilot awareness, the eXom features a suite of integrated sensors including five vision sensors and five ultrasonic proximity sensors which allow the operator to see in the direction the drone is moving  and avoid obstacles – without needing to turn the system’s main camera head. Along with eXom’s autopilot-controlled TripleView head this allows a user to view and record any type of imagery they require – HD video, ultra high-resolution stills, thermal data, or all of the above without needing to land and swap cameras. Since its camera head faces the front, eXom can fly up close to structures for sub-millimetre image resolution.

Trace offers a smart camera that uses “proprietary video-as-a-sensor technology” to select and follow objects. The camera could work in a variety of robotics and drone projects.

The University of Pennsylvania demonstrated an Android smartphone using specialized Qualcomm vison-processing software serving as a navigational controller for a quadcopter. The demonstration was a research project of post-doctoral researcher Giuseppe Loianno and the Qualcomm software library looks interesting for the DIY roboticist.Employing “visual inertial sensor fusion” the  visual inertial tracker provides an estimate of inertial sensor calibration parameters such as biases, gravity vector, location of feature points, and the pose of the phone in space utilizing both inertial sensors and camera measurements. The system has been designed to support applications in real-time at 30Hz and the tracker run-time is optimized to utilize less than 1 core of a modern smartphone CPU.

Mysterious start up Magic Leap remains mysterious, and is nowhere to be seen, The world awaits the revealing of the magic Dynamic Digitized Lightfield Signal™ which they claim is able to generate images indistinguishable from real objects and which would therefore render all other display technologies obsolete.  Although they’ve recently announced the hiring of futurist and author Neal Stephenson, their absence is good news because it gives everyone some time to catch up on Oliver Stone’s paranoid miniseries WIld Palms which posits this exact sort of technology.

The Avegant Glyph wins the award for most “unique” CES 2015 AR/VR product concept, where an augmented reality headset is built around a flip down retinal display that otherwise looks like a pair of headphones. Of course even early head mounted display designs such as those from Virtual Research in the 1990s incorporated headphones. This might be cool if it was well executed, but as reported here, as is, this device is in fact somewhat problematic.  If the final design ends up resting heavily on your nose or clamping onto your head like an alien larva, it’s not going to be a useable device. It’s also unclear how comfortable it will be to have the display optics resting directly on your head in headphone mode for any period and one has to consider the social stigma of “HMD hair”. The ability to hide or disguise a display in other wearables such as headphones or clothing is an interesting concept as is the VRD technology. An alternative design with “snap on” components might be workable as another example.

A close second was the return of the head shoe style HMD as the GCS3 Gamecaster.  :/

This is possibly the most anticipated CES announcement for the VR hacker community, the Open Source Razer is a fully open hardware and software system that rivals the Oculus Rift. Promised for June 2015 at a $200 price point this could be the thing that launches the OSVR project into the mainstream. While this device is overshadowed by the Oculus, many developers are going to value the open approach. This should be in your kit either way. 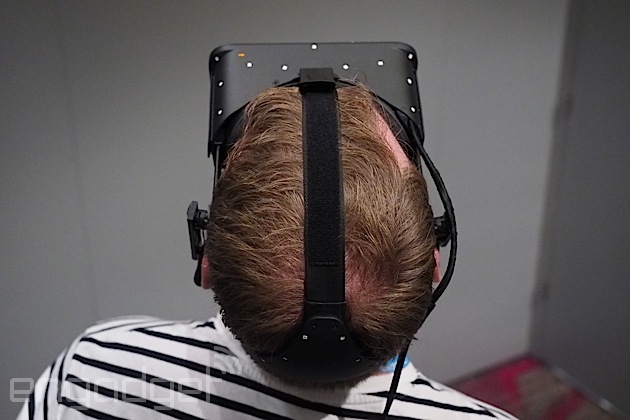 RS3D is a standard 3D audio approach using a head-related transfer function or HRTF along with cues due to a customizable room model. This is very similar to what we did using the Turtle Beach “Beachtron” with a studio room emulator back in the 1990s.  Real Space claims they use “proprietary adjustments necessary to accommodate the complex interplay between the two cues”, but regardless of how well that works, their API is incorporated into popular gaming engines and currently the most popular 3D audio API . Applications developers and DYI VR enthusiasts possibly already know about this kit however and “Crescent Bay” is just the consumer ready latest non-nauseating version of the Rift. Good but nothing hugely novel here.

It is known that good quality audio can radically enhance the perception of quality of computer graphics and further enhances immersion in a virtual world. World builders should all be using this API or similar.

Overlooked in the hype around Oculus and similar VR displays is an important partnership between startup Zspace and HP. The Zvr is a special-purpose display and virtual reality system based around technology developed by Zspace. Zvr incorporates four cameras for head-tracking, as well as 6DOF gyroscopic stylus tracker that allows for both precise pointing and true 3D manipulation of virtual objects , and a 3D display that uses “shutter” glasses to enable very high resolution display 3D. The end result is that users can view and interact with very high resolution 3D objects which appear to float in front of or above the display.

HP is also offering Zview software for the sharing of 3D content suitable for use on the Zvr.

While some reporters dined on 3D printed pizza the real news in 3D printing at CES was Voxel8’s 3D dual-head machine which outputs plastic in standard FDM mode but also has a second conductive paste extruder. Further, along with specially developed software from Autodesk, the printer is designed to enable users to embed electronics directly into 3D printed objects they create. This is  first real and available 3D printer that can deliver printable electronics embedded into a printed object. The device is $9000 so this isn’t something every 3D printer owner is going to get but they are going to want it. Serious enthusiasts and maker spaces are going to be adding this to their list.


Autonomous Cars and Cars as Offices

The automotive world was shaken by Mercede’s novel car design which seems more like a room on wheels than a conventional car. Mercedes get this right as future cars will deliver services and spaces required to wherever we are. Your future office might look a lot like this and it will commute to where you are rather than you commuting to it. 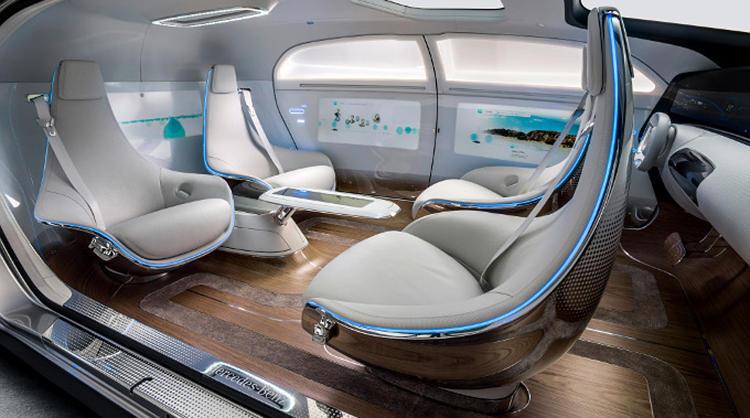