The Transhumanist Party: Could It Change Our Future?

The noted transhumanist Zoltan Istvan recently published an article in the Huffington Post entitled: Should a Transhumanist Run for US President? Istvan is preparing to run for the Presidency of the United States in 2016, as a member of his newly formed Transhumanist Party, a political organization dedicated to using  science and technology improve human beings and their society. In addition to promoting ideals like prosperity and security his political agenda is as follows:

1) Attempt to do everything possible to make it so this country’s amazing scientists and technologists have resources to overcome human death and aging within 15-20 years—a goal an increasing number of leading scientists think is reachable.

2) Create a cultural mindset in America that embracing and producing radical technology and science is in the best interest of our nation and species.

3) Create national and global safeguards and programs that protect people against abusive technology and other possible planetary perils we might face as we transition into the transhumanist era.

Although the universal benefits of such goals are obvious, politicians ignore them. Instead “They’re more interested in landing your votes, in making you slave away at low-paying jobs, in keeping you addicted to shopping for Chinese-made trinkets, in forcing you to accept bandage medicine and its death culture, and in getting you to pay as much tax as possible for far-off wars (places where most of us will never step foot in).”

Istvan realizes that he will not get elected, and will have difficulty even getting on many state ballots, but he thinks the forming of the party is a start. “[I]f transhumanists—a growing group consisting of futurists, life extensionists, biohackers, technologists, singularitarians, cryonicists, techno-optimists, and many other scientific-minded people—are serious about the pending future, then it’s time to get involved in the political game …” And perhaps the time is right since the transhumanist movement is becoming more mainstream. “There are many employees at major tech companies like Apple, Facebook, and Google who subscribe to transhumanist aims. Transhumanist-themed conferences, groups, and even schools, like Singularity University, are popping up.”

I can personally attest to this rapid transformation. When I taught transhumanist themes in a world-class computer science department just ten years ago, the ideas were generally dismissed by both students and faculty. Now, with drone planes replacing jet pilots, AI and robotics progressing, Ray Kurzweil essentially Google’s thinker-in-chief, the idea of the singularity omnipresent in silicon valley, rapid advancement of self-driving cars, exoskeletons showing promise and more, I do feel somewhat vindicated. No, we haven’t yet reached a technological singularity, and any given prediction regarding the reality and benefits of a future technology is open to the vicissitudes of fortune and a thousand caveats. Still the inexorable transformation of our world unfolds before our eyes each day.

Yet although the pace of change is increasing exponentially, many still respond to the unfamiliar with ancient and uniformed dogma wired by genes and culture into their primate brains. This will not do. As we enter into this new world we need brains capable of greater intelligence and morality; we need to evolve; we need to transform. But this can only be accomplished in a social and political milieu that actively promotes the transhumanist goal of using science and technology to overcome all human limitations. I thus applaud Istvan’s potential foray into politics and I think we should support him.

Finally I echo Istvan’s concerns about mustering the political will to defeat death. There is no more important human project. As I wrote in most recent book, The Meaning of Life: Religious, Philosophical, Transhumanist, and Scientific Perspectives

Only if we can choose whether to live or die are we really free. Our lives are not our own if they can be taken from us without our consent, and, to the extent death can be delayed or prevented, further possibilities for meaning [in life] ensue. Perhaps with our hard-earned knowledge we can slay [what Nick Bostrom calls] the dragon tyrant, thereby opening up the possibility for more meaningful lives. This is perhaps the fundamental imperative for our species. 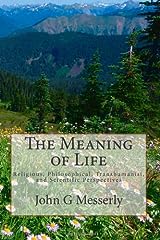