Sousveillance and Surveillance: What kind of future do we want? 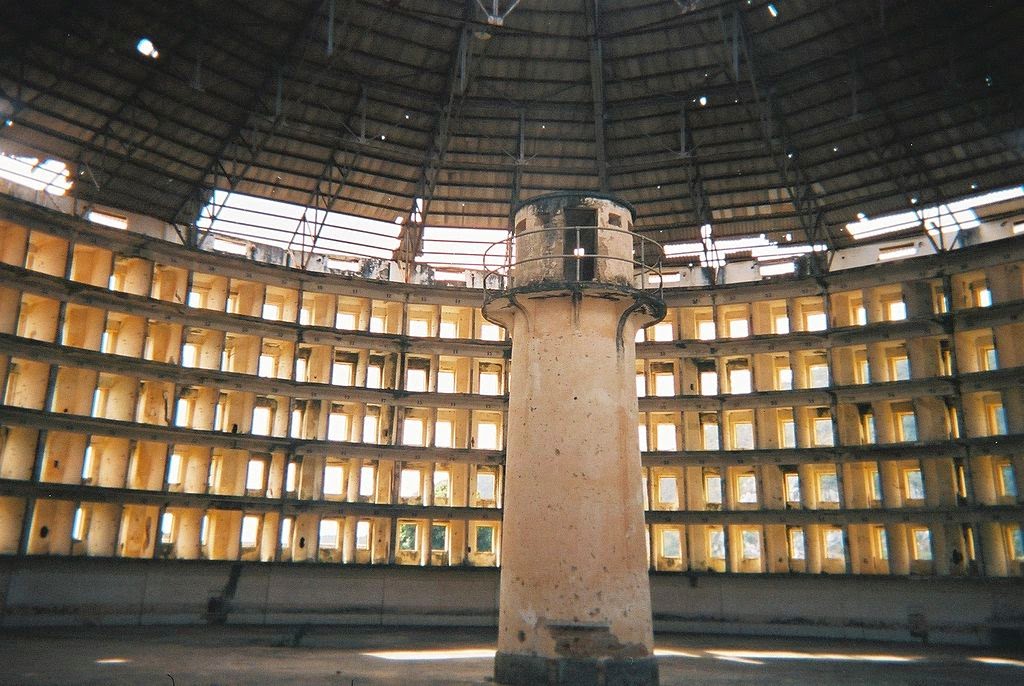 Jeremy Bentham’s panopticon is the classic symbol of authoritarianism. Bentham, a revolutionary philosopher and social theorist, adapted the idea from his brother Samuel. The panopticon was a design for a prison. It would be a single watchtower, surrounded by a circumference of cells. From the watchtower a guard could surveil every prisoner, whilst at the same time being concealed from their view. The guard could be on duty or not. Either way, the prisoners would never know if they were being watched. This uncertainty would keep them in check:

The building circular—A cage, glazed—a glass lantern about the Size of Ranelagh—The prisoners in their cells, occupying the circumference—The officers in the centre. By blinds and other contrivances, the inspectors concealed […] from the observation of the prisoners: hence the sentiment of a sort of omnipresence—The whole circuit reviewable with little, or if necessary without any, change of place. One station in the inspection part affording the most perfect view of every cell.

(Bentham, Proposal for a New and Less Expensive mode of Employing and Reforming Convicts, 1798)

Bentham’s panopticon was never built, though certain real-life prisons got pretty close (e.g. the Presidio Modelo in Cuba). But many see echoes of the panopticon in the modern surveillance state. We are like the prisoners. Our world has become flooded with devices capable of recording and monitoring our personal data, and feeding them to various authorities (governments and corporations). And although nobody may care about our personal data at any given time, we can never be sure you are not being watched.

This is all pretty banal and obvious if you’ve been paying attention over the past few years. But as many futurists and technophiles point out, there is one critical difference between the panopticon and our current predicament. In the pantopticon, the information flows in one direction only: from the watched to the watchers. In the modern world, the information can flow in many directions: we too can be the watchers.

But is this a good thing? Should this ability to surveil and monitor everything be embraced or resisted? Those are the questions I wish to pursue in this post. I do so by focusing, in particular, on the writings of sousveillance advocate Steve Mann. On a previous occasion, I analysed and evaluated Mann’s case for the sousveillant society. Today, I want to do something slightly less ambitious: I want to review the possible future societies that are open to us depending on our attitude toward surveillance technologies. Following Mann, I’ll identify four possibilities and briefly comment on their desirability.

1. The Surveillance-Sousveillance Distinction
The four possible future arise from the intersection of two competing approaches to “veillance” technologies. These are the surveillant and sousveillant approaches, respectively. You may be familiar with the distinction already, or have a decent enough grasp of etymology to get the gist of it (“sur” means “from above”; “sous” means “from below”). Nevertheless, Mann offers a couple of competing sets of definitions in his work, and its worth talking about them both.

The first set of definitions focuses on the role of authority in the use of veillance technologies. It defines surveillance as any monitoring that is undertaken by a person or entity in some position of authority (i.e. to whom we are inclined/obliged to defer). The authority could be legal or social or personal in nature. This is the kind of monitoring undertaken by governments, intelligence agencies and big corporations like Facebook and Google (since they both have a kind of “social” authority). By way of contrast, sousveillance is any monitoring undertaken by persons and entities that are not in a position of authority. This is the kind of citizen-to-authority or peer-to-peer monitoring that is now becoming more common.

The second set of definitions shifts the focus away from “authorities” and onto activities and their participants. It defines surveillance as the monitoring of an activity by a person that is not a participant in that activity. This, once again, is the kind of monitoring undertaken by governments or businesses: they monitor protests or shopping activities without themselves engaging in those behaviours (though, of course, people employed in governments and businesses could be participants in other activities in which they themselves are surveilled). In contrast, sousveillance is monitoring of an activity that is undertaken by actual participants in the activity.

I’m not sure which of these sets is preferable, though I incline toward the first. The problem with the first one is that it relies on the slightly nebulous and contested concept of an “authority”. Is a small, local shop-owner with a CCTV camera in a position of authority over the rich businessperson who buys cigarettes in his store? Or does the power disparity turn what might seem in the first instance to be a case of surveillance into one of sousveillance? Maybe this is a silly example but it does help to illustrate some of the problems involved with identifying who the authorities are.

The second set of definitions has the advantage of moving away from the concept of authority and focusing on the less controversial concepts of “activities” and their “participants”. Still, I wonder whether that advantage is outweighed by other costs. If we stuck strictly to the participant/non-participant distinction then citizen-to-authority monitoring would seem to count as surveillance not sousveillance. For example protestors who record the behaviour of security forces would be surveilling them, not sousveilling them. You might think that’s fine — they’re just words after all — but I worry that it misses something of the true value of the sousveillance concept.

That’s why I tend to prefer the first set of definitions.

2. Four Types of Veillance Society
And the definitions matter because, as noted above, the surveillance-sousveillance distinction is critical to understanding the possible futures that are open to us. You have to imagine that surveillance and sousveillance represent two different dimensions or matrices along which future societies can vary. A society can have competing attitudes toward both surveillance and sousveillance. That is: they can reject both, embrace both, or embrace one and reject the other. The result is four possible futures, which can be represented by the two-by-two matrix below. 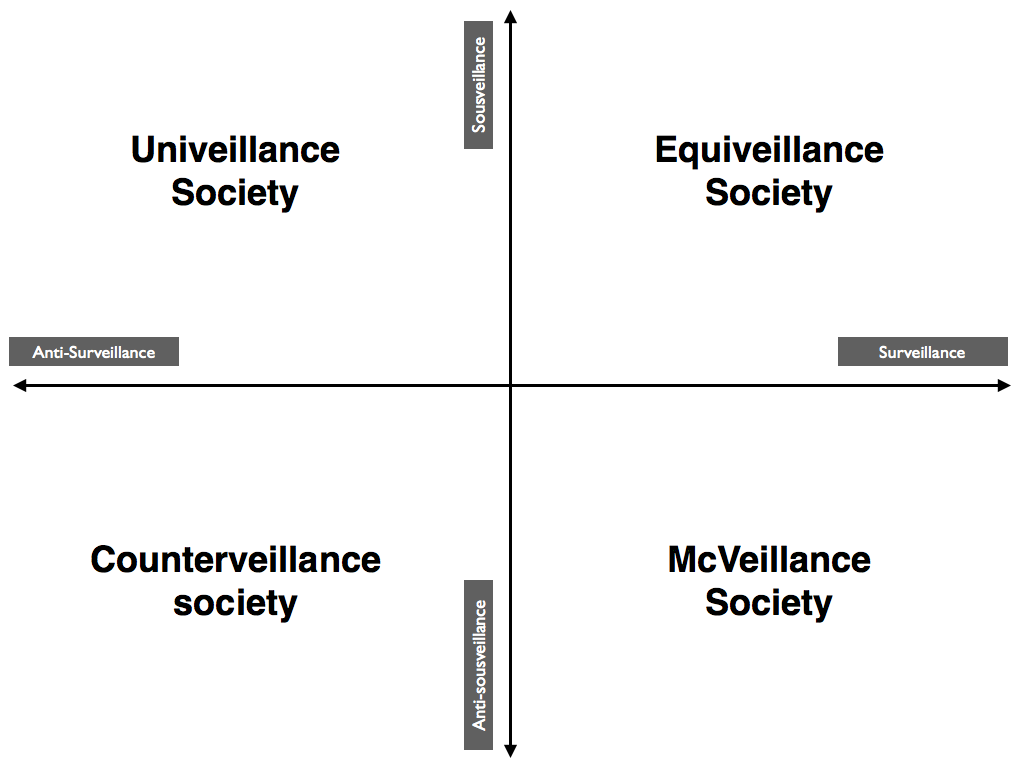 (Note: Mann adopts a slightly more complicated model in his work. He imagines this more like a coordinate plane with the coordinates representing the number of people or entities engaging in different types of veillance. There may be some value to this model, but it is needlessly complex for my purposes. Hence the more straightforward two-by-two matrix).

The Equiveillance Society: This is a society which embraces both surveillance and sousveillance. The authorities can watch over us with their machines of loving grace and we can watch over them with our smartphones, smartwatches and other smart devices (though there are questions to be asked about who really controls those technologies).

The Univeillance Society: This is a society which embraces sousveillance but resists surveillance. It’s not quite clear why it is called univeillance (except for the fact that it embraces one kind of veillance only, but then that would imply that a society that embraced surveillance only should have the same name, which it doesn’t). But the basic idea is that we accept all forms of peer-to-peer monitoring, but try to cut out monitoring by authorities.

The McVeillance Society: This is a society that embraces surveillance but resists sousveillance. Interestingly enough, this is happening already. There are a number of businesses that use surveillance technologies but try to prevent their customers or other ordinary citizens from using sousveillance technologies (like smartphone cameras). For example, in Ireland, the Dublin Docklands Development Authority tries to prevent photographs being taken in the streets of the little enclave of the city that it controls (if you are ever there, it seems like the streets are just part of the ordinary public highways, but in reality they are privately owned). The name “McVeillance” comes from Mann’s own experiences with McDonalds (which you can read about here).

The Counterveillance Society: This is a society that resists both types of veillance technology. Again, we see signs of this in the modern world. People try to avoid being caught by police speed cameras (and there are websites set up to assist this), or having their important life events being recognised by big data, and or having their photographs taken on nights out.

The modern world is in a state of flux. It is only recently that surveillance and sousveillance technologies have become cheap and readily available. As a result we are lurching between these possibilities. Still, it is worth asking what do we want the future to look like?

3. So what future should we aim for?
The answer to that question is difficult. Each society has its appeal to different interests and values. And it is possible that we could subdivide society into different “regions” with different possibilities prevailing in different regions. Also, it might be more worthwhile asking which of the four is really possible? Though one can certainly imagine circumstances in which each becomes a genuine reality, that’s not saying a whole lot. Imagination is often unconstrained by probability. In considering what is desirable we might be better off constraining ourselves to what it probable.

I suspect no one really wants to live in the McVeillant society. Even those businesses and authorities that want to stamp out sousveillance probably wouldn’t tolerate the same policy being imposed on them. But I think it is a genuine possibility and one we should guard against. I suspect some people would like to live in the univeillant society, but it’s not a real possibility. There will always be some kinds of social authority and they will always try to monitor and control behaviour. Similarly, the counterveillant society will hold appeal for some, but I’m not sure about its likelihood. There are some resistive technologies out there, but can they cope with everything? Will we all have to walk around in movable Faraday cages to block out all EM-fields?

That, of course, leaves us with the equiveillant society. I tend to think this has the best combination of desirability and probability, but I certainly wouldn’t like to give the impression that it would be a panacea. As I noted in a previous series of posts, widespread availability of sousveillant technologies is unlikely to solve issues of power imbalance or social injustice. Still, it could help and focusing on carefully engineering that possible future would probably be better than sleepwalking into the McVeillant society. What do you think?

John holds a PhD student specialising in the philosophy of criminal law (specifically, criminal responsibility and game theory). He formerly was a lecturer in law at Keele University, interested in technology, ethics, philosophy and law. He is currently a lecturer at the National University of Ireland, Galway (starting July 2014).