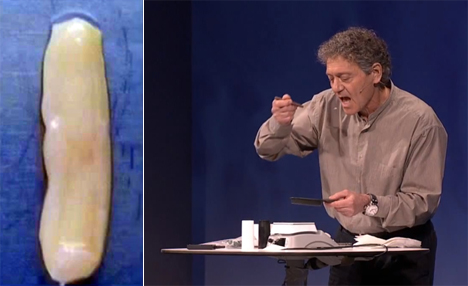 A hamburger taste test in August of last year in London, England, may inaugurate a revolution. The hamburger in question was meat made in vitro, in a lab petri dish, cultured from stem cells from donor animals.

Now let’s talk about the present. A new business startup out of Brooklyn, New York, called Modern Meadow, intends to take in vitro from the lab to commercial production. Meat would be cultured in large vats. The company founder, Andras Forgacs, previously developed 3-D printed human tissue for biomedical applications. He realized that if he can use cells and a 3D printer to grow human skin, then why not leather. And if he could assemble a living organ, then why not meat protein.

Today the McDonald quarter pounder uses up a lot of Earth resources. Every hamburger patty requres 3 kilograms (6.7 pounds) of feed grain, 200 liters (52.8 gallons) of freshwater, 6.9 square meters (74.5 square feet) of grazing and feed crop production space, 1,093 joules (1.036 BTUs) of energy, and releases over 6 kilograms (13.4 pounds) of CO2. Is this sustainable for the future? The answer is no.

Why? Because meat consumption is going up despite despite the rise of the Vegan population in the Developed World. The Developing World is looking to additional meat in their daily diets. Currently humans consume 300 million tons of the stuff a year. But with our population expected to exceed 9 billion by 2050, the amount of meat we consume will easily exceed 500 million tons annually.

Modern Meadow believes that increasing livestock herds is not the answer. There is a better way and our London hamburger taste test of last year is showing us the way. Growing meat from stem cells cultures at an industrial scale is the answer. It solves so many problems. It means less land is used for herding and foraging. It means no fear of disease from animal food sources. And it means ending the industrial slaughter of animals for human consumption. And once we have production scaled to make it affordable we can produce meat anywhere, even in space habitats and for crews on long duration space flights.

Modern Meadow already knows how to grow human tissue for medical applications. It has expertise in bio-printing, the use of 3D printers and computers to assemble tissue. And now it is applying what it has developed for the purpose of mass producing meat and leather. The company has already received a $10 million investment from Hong Kong billionaire, Li Ka-shing. And in the last week, the company’s founder was interviewed by David Talbot at the MIT Emtech conference.

Talbot asked Forgacs (seen in the picture below tasting his own product) about taste testing of what are called “steak chips.” These are manufactured cow muscle chips that can be given a variety of flavors. According to those in the know they taste like crispy beef jerky. But Forgacs right now is only doing private tastings. You and I will have to wait about five years before we’ll see steak chips and other Modern Meadow products in refrigerators and on store shelves.

This article originally appeared on his blog here: http://www.21stcentech.com/leather-meat-local-manufacturer-named-modern-meadows/