We Are the Krell — Transhumanist Themes in Forbidden Planet

Forbidden Planet is a 1956 American science fiction film that is relevant to transhumanists. It offers an interesting cautionary tale and covers a variety of topics such as intelligence augmentation, robotics, interplanetary travel and the creation of a Great Machine that can accomplish any purpose.

WARNING: This article contains spoilers. Do not read further if you haven’t seen the film and plan to see it.

In the 23rd century, the starship C-57D travels to the distant planet Altair IV to discover the fate of an expedition sent 20 years earlier. After entering orbit, the C-57 receives a transmission from Dr. Edward Morbius who is one of the missing expedition’s scientists. He states no assistance is necessary and warns the ship to stay away, but Commander John Adams (Leslie Nielsen) insists on landing and investigating further.

They are met on arrival by Robby the Robot  who is probably the most famous and iconic fictional robot from the era in any film or TV program. Robby takes Adams to Morbius’s home along with two senior crew members, Lieutenant Farman and Lieutenant “Doc” Ostrow. There they meet Dr. Morbius and his beautiful daughter Altaira (Anne Francis), who recounts that an unknown “planetary force” killed almost the entire expedition and then vaporized their starship, the Bellerophon, as the survivors tried to leave.

According to Morbius, only he, his wife (conveniently now deceased), and their daughter Altaira were somehow immune. Morbius fears that the C-57D crew will meet the same fate as the crew of the Bellerophon. Or so he says. Meanwhile, the beautiful Altaira, having only known her father, becomes attracted to several of the Earth men much to the doctor’s dismay and discomfort.

The following night various large equipment aboard the C-57D is damaged by an invisible intruder. Adams and Ostrow confront Morbius suspecting his involvement, and they learn he has been studying the Krell, a highly advanced race that had mysteriously died out very suddenly 200,000 years before.

In a Krell laboratory, Morbius demonstrates a device he calls a “plastic educator”, a machine capable of measuring and enhancing intellectual capacity, and which teaches its users the knowledge of the Krell.

Morbius claims that when he first used this machine, he barely survived but discovered his IQ was permanently doubled. This enabled him, along with information from the Krell library, to build Robby the Robot and the other “technological marvels” in his home.

Morbius then takes the Commander and his men on a tour of a vast cube-shaped underground Krell machine complex, each side 20 miles (30 km) long, still functioning and powered by 9,200 thermonuclear reactors.

Afterwards, Adams demands that the Krell’s knowledge be turned over to Earth supervision but Morbius refuses, citing the potential danger that the advanced Krell technology would pose to mankind if it were to fall into the wrong  human hands. And it is implied, although never stated, that the Commander fears, perhaps instinctively, that with Morbius it already has.

In response to the attack on the ship Adams orders the crew to deploy a force field fence. This proves useless, and the intruder returns and murders Chief Engineer Quinn leaving behind enormous footprints.

When the intruder returns yet again, the crew discovers that the creature is normally invisible but becomes temporarily semi-visible as it stands within the fence’s field. They use an energy weapon in an attempt to destroy the monster but this has no effect and the monster kills Farman and three other crew members. 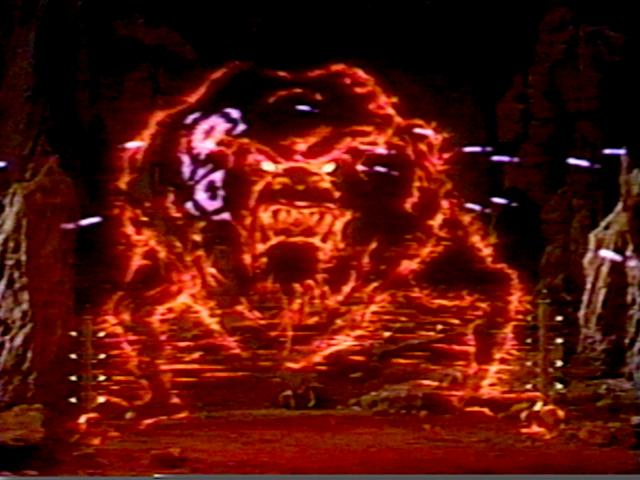 Back in the Krell lab, Morbius is startled awake by Altaira’s screaming; at that same instant, the semi-visible creature suddenly vanishes and the attack ends.

Following the attack, Commander Adams confronts Morbius at his home, while Ostrow sneaks away to use the Krell educator without the commander’s permission.

As Morbius had warned however, Ostrow is fatally injured despite having his mental capacity enhanced by the educator. Before he dies Ostrow explains that the Krell’s Great Machine was built to materialize anything the Krell could imagine, enabling them to project matter anywhere on the planet by thought alone. He further reveals that the Krell forgot one thing: “Monsters from the Id!”, that is, their own animal unconscious minds also were materialized by the machine and promptly destroyed them.

But, we are the Krell.

Humanity stands poised at this very moment to implement many of the abilities and technologies imagined for the far advanced Krell. We already control vast energies and materialize machines previous generations only imagined.

The Krell educator is already real. The Internet has become a vast learning machine, including systems for educating billions of people that never before had access to educational resources. These aren’t just factual repositories like Wikipedia, but interactive online courses and MOOCs that serve thousands of students or co-learners at once.

New technologies such as tDCS and advanced nootropics, adaptive AI-based teaching systems, and many others promise to revolutionize the process of learning itself. Advances in brain computer and neural interfaces, for example, will allow us to directly connect our minds to the Internet, to experience others’ thoughts and emotions as if they were our own, and potentially also usher in a new era of learning and knowledge. Spatial memories of rats have been stored in electronic devices and transferred between individuals. A future neural interface based learning system might allow us to instantly or rapidly learn complex fields of interest or even physical skills like martial arts or juggling.

While the power resources of the Krell seemingly are well beyond our reach today since only 437 nuclear power plant units with an installed electric net capacity of about 375 GW were operating worldwide as  of August 28, 2014. The Krell Machine would  produce at least 21x the entire nuclear power output of the world. But we already produce more than this from non-nuclear sources. Of course we aren’t going to have a single accessible machine that can direct or utilize all of this power anytime soon, but advances in solar energy, nuclear fusion, wireless power delivery and more suggest that it isn’t entirely impossible that large amounts of energy could be made available anywhere on demand. We might someday have such capability to control and direct vast powers and to use them to drive machines or for other purposes. Of course there is no reason to assume that the film’s estimate for what would be required to operate a Great Machine is even close to accurate. The Krell weren’t even a Kardeshev Level II society apparently and it seems wildly low as even a back of the envelope estimate.

However already we can take direct mental control over matter, for example allowing us to control prosthetic limbs and robots through electronic neural connections. Electronic telepathy, thought based communication over a distance, was recently demonstrated in a crude fashion. It isn’t too far fetched to imagine connecting these various advances together and further adding the ability to “materialize” objects through an advance in molecular manufacturing and nanorobotic manufacturing.

Imagine a global network of very advanced “3D printers”, really nanotechnological manufacturing systems, that can create whatever we can think of and wherever we want it on demand. We could literally materialize our imagination. But what will we imagine? What will we choose to materialize? And what if our unconscious minds, somehow, started to materialize things without our conscious control?

While it makes for a great movie, in fact it seems this would be a relatively simple design problem to solve. A system of this sort would naturally require conscious awareness and consent to materialize objects perhaps employing biometric security of some sort. So you woulldn’t materialize anything unless you really wanted to and not while dreaming. We already know how to identify and differentiate unconscious, preconscious, conscious and dream activity in the brain so it seems entirely feasible.

However, we could not limit what people consciously create with our own version of the Great Machine.

This is an example of The Ordering Problem. That is, the order of technological development matters with respect to outcomes. Or, stated another way, if our abilities outpace our wisdom we may be in trouble. If every person had the ability to materialize whatever they imagined, some of them might imagine things that are quite dangerous to the rest of us! But it seems impossible to stop.

At least we do not yet have the ability to positively identify dangerous items or ideas a priori. No individual human is at present intelligent enough to accomplish this nor could they consider the vast numbers of potentially dangerous items and ideas rapidly enough. Identifying dangerous items would perhaps require the development of a vast artificial machine superintelligence.

If we accidentally create a Great Machine before we acquire the prerequisite knowledge to prevent its dangerous use, we might very realistically eliminate ourselves. It might happen almost immediately after we powered the system up as apparently happens with the Krell. Perhaps this is an explanation for so called Great Filter and Fermi Paradox.

But if we take a different perspective, applying reason and imagination, what knowledge would be required to safely use a machine that could materialize thought on demand? Is it even possible? Why or why not?

There might be various approaches, but one would be to identify dangerous substances and items before they were materialized. The requirements to accomplish this are however staggering. How can you tell if an item is dangerous or safe? What about dangerous items built out of many smaller and individually safe items? Do you have to restrict the parts too? Can any intelligent system accomplish this task regardless of its level of relative “super” intelligence? And what if the super-intelligence required is itself dangerous?

Another approach would be to examine the thoughts of users of The Machine to prevent dangerous ideas from ever being materialized. Everyone would be monitored 24/7 just in case. But this would be the ultimate police state, where real thought police would patrol everyone’s minds day and night. It would be the end of freedom and perhaps even individuality. The cure would be worse than the disease, a neural interface based Orwellian hell on Earth.

Are we to conclude that all users of Great Machines are doomed throughout the universe? Is there no safe way to use a Great Machine? A third way seems necessary at least.

We could develop super-happiness first, ensuring that all users of the Great Machine are omni-benevolent transhuman bodhisattvas who simply would never use the machine to cause harm or for selfish reasons. Although it might be possible to use the machine in dangerous ways, no one would ever do it. And if anyone tried, they’d be confronted by an army of angry posthumans with the ability to directly manifest defensive measures locally.

Given the sad state of disarray with human affairs (e.g. continuing war, poverty and violence) and the weakness of existing computer security methods it is easy to be pessimistic. But all of the pre-requisite technologies are presently being developed to create a positive outcome, that is, if we can just get the order right.