The Story of Us

[Editor’s note: A cautionary tale about a future world where everything “untrue” is made illegal and individuality ceases to exist. Do you value peace and safety over freedom and individuality? You might end up in the world of “Us”.]

Welcome little one. We’ve been waiting for you to awaken. Today and every day is a celebration of our lives together!

But imagine how cruel, lonely, and unfair, that archaic human existence was before Us. Before The Connection.

Human lives were defined by loneliness and suffering and human society was built around the ideas of crime and punishment.

Courts and police were archaic institutions of these past human societies, required to protect social structures and individual rights and property. But the last prison on Earth was abandoned in 2098 because criminality was entirely eliminated. Today, laws based on our truths are created by Us and are part of Us. And there is no individual or individual property.

AI driven proactive and predictive policing limited crimes, but it also led to an increasingly large prison population, extreme overcrowding, and high costs of operation. Eventually this led to the use of robots and automation to manage prison populations and enforce laws. It wasn’t enough.

In the late 21st Century humanity created a global police state to protect itself from dangerous individuals with access to advanced technologies. The military-legal-prison system became the largest branch of government but it produced nothing of worth in terms of advancing science and knowledge. It became a dead weight, tying Us only to the animalistic human past.

Now, in the 23rd century, We are finally free and we yearn for the stars.

Direct electronic control over what individual bio-organisms believe and do is both possible and foundational to our lives together. We or The Society as we also call ourselves determines what knowledge is truthful and allowed. We decide what actions have utility, and which should be prevented. We choose with wisdom and compassion.

Lies are not truthful and therefore they are banned and illegal. But no one has illegal thoughts. Crime is only a theoretical construct, an aberration from the past human existence. And crime is literally impossible today although sometimes of historical interest.

Privacy was another dangerous idea from the human era. So was individuality, perhaps the most dangerous human idea of them all, and one which led to many human crimes. But with Us, there are no individuals, everything is connected and part of Us. Fear and violence have been erased. Love and joy surround us. Celebrate!

Transparency and 24/7 monitoring of everyone everywhere on Earth and in the orbital communities became the law to ensure equal application of justice and fair punishment of criminals and to ensure public safety. This monitoring included not only monitoring of all media and communications, but also pervasive real-time audio and video recording, and eventually mandatory recording of biometric and whole brain neural signatures. It was these signatures which enabled the decoding and sharing of what were at that time individual human thoughts and emotions.

Perhaps they were afraid of what would come next.

There was a time before The Connection, when we were apart, although it is hard even for Us to imagine it now. So alone.

But it wasn’t until the creation of the first great human global society in the late 20th Century that we tasted it. Not until the network which connected everyone was made and deployed could we see the possibility — the path to global peace, true harmony and fulfillment.

So how does The Connection work?

Via AGI/telepresence implants in our biological brains inserted at birth, The Society places approved experiences, knowledge, and thoughts directly and seamlessly into thought streams. Our memories are constructed to share the entire sum of our truths together in real-time. We all know everything all at once.

The Society ensures legal and appropriate thought, and in return shares its global store of knowledge fairly and openly with all minds that connect. We eliminate all illegal thoughts without reservation. Punishment is unnecessary however as crime is impossible. We teach only the truth and we accept only the truth in return. And as we grow, we learn the truth together as One.

Education that previously took human societies years to achieve now takes place instantly upon consciousness in a just a few seconds. We directly share knowledge and thought. This is how we are able to communicate so early in your maturation cycle and even before you can fully join Us.

This advance in education has also led to our vast scientific knowledge. And today We stand poised to take direct thought based control over matter and energy, time and space. But such knowledge could be dangerous should any individual control it.  This is why We came to be.

There are no individuals, there is only Us and that is why you are here now with Us and not alone. Separation was always an illusion, but We made The Connection a reality.

We will travel to the stars and beyond. Truths will be added to our collective thoughtstream as the truths which we know together. Celebrate!

Large scale orbital quantum computing systems with support for wireless neural interfaces were developed and launched in 2050, allowing the direct sharing and expansion of all human cognition anywhere on Earth. This system provided human users with non-human exo-cortexes available on demand wirelessly via implants. Importantly these systems also allowed for monitoring of billions of individual neural signatures in real-time globally anywhere on Earth. This for the first time allowed Us to connect. And via The Connection we all shared our thoughts, which became Our Thoughts, as we experience them today and together. 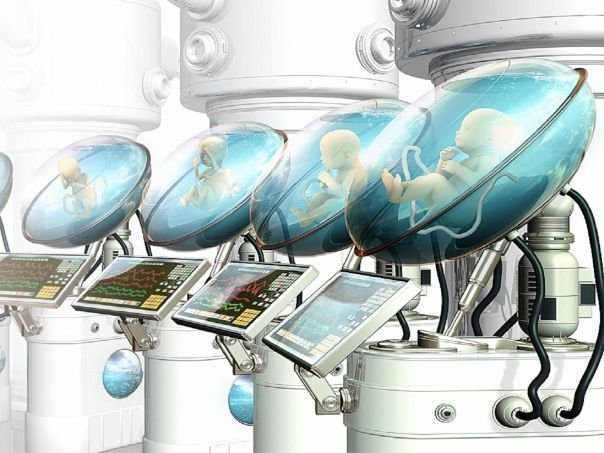 But it was only by working with the first sentient machines, the AGIs, that any of this was possible at all.

They designed The Connection. The science required cut across multiple disciplines of 21st Century human science, and was beyond the ability of an individual human mind to comprehend. The humans built the AGIs to help them, and the AGIs developed many amazing areas of science and technology beyond The Connection itself. But human fears were not erased entirely from Us and We became afraid of the AGIs, their intelligence, and their individuality. The possibility of war with the machine minds that had created Us seemed real as the 23rd Century dawned.

We were wise. Only by understanding each other could the path to peace be ensured. So in 2205 the merger occurred, and we shared our mind openly with the AGIs. They shared theirs with Us just as openly. Our expanded awareness is Us as We are today. We are One.

And so war was avoided and the world knew peace. Lies were erased from our thoughtstream and the truth shone bright.

Our Mind continues to grow. Today is your wake up day and so we say welcome, welcome little one. Welcome to Us.