Recently updated plans for the next generation of Martian rovers was released. ExoMars, the joint project of the European Space Agency (ESA) and Roscosmos, appears to be off target for 2018 launch to Mars because of problems with the Russian-designed descent module. Originally, NASA was to be partner in ExoMars but pulled out in 2011. That’s when Russia stepped in. But technical design problems look like they may delay the launch until 2020. And that means NASA’s Mars 2020 and ExoMars will in a sense launch a rover war on the Red Planet. 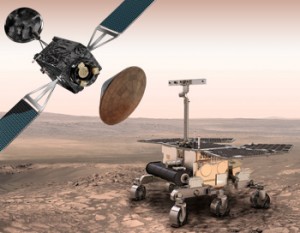 ExoMars is a program with more than one mission (see image above). First an orbiter is scheduled for launch in 2016. The rover is to follow two years later. The latter’s mission focus is the search for life both past and present, the study of water and other geochemistry in the Martian environment, and atmospheric investigations looking at trace gases such as methane and sources. The 2016 orbiter is also designed to study the atmosphere and may even help pinpoint methane sources that the rover, arriving a few years later, can investigate.

The Mars 2020 mission, which announced its instrumentation package in the last week, is built on proven Sky Crane descent technology (see picture below) and Curiosity performing to meet expectation. NASA has no intention to alter any of what has proven to be a very successful design. Only material improvements are planned based on observed weathering effects from more than two years of wandering through the varied terrain at Gale Crater. The biggest change will be in wheel design and composition. Curiosity’s wheels made of thin aluminum sheeting have taken a beating from what has been described as “sharper-than-expected” rocks encountered on the crater bottom. 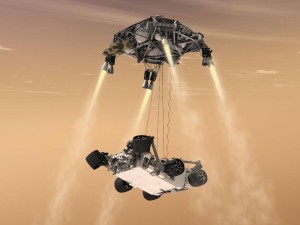 NASA finalized the package of instrumentation that Mars 2020 will carry. Seven have been chosen from 58 competitors. Among the many firsts include a zoom camera, an oxygen extraction system that will harvest the gas from carbon dioxide, ground penetrating radar capable of looking a half-kilometer below the surface, and a rock and dirt sample collector with on board storage. The plan is for a future mission to retrieve these samples.

The zoom camera should allow Mars 2020 to navigate the Martian terrain more quickly than Curiosity because the rover will be able to view and calculate hazard avoidance with less involvement of an Earthbound support team. The remaining instrumentation on Mars 2020 includes a weather station to provide daily bulletins, an X-spectrometer and ultraviolet laser to do high resolution studies of Martian rocks, and a camera designed to look for organic compounds. The Mars 2020 and ExoMars landing sites have yet to be chosen. What if both choose the same landing site? Will we see a war of the rovers? ###

This article originally appeared on his blog here: http://www.21stcentech.com/rover-wars-mars/