I recently got together with Ron Kaplan who is a well known artificial intelligence researcher in the area of natural language processing. Ron is a Distinguished Scientist at Nuance Communications. The conversation is about 1 hour long and the main theme was the recent comments about dangers from artificial intelligence made by Professor Stephen Hawking and also Elon Musk, as well as Eugene Goostman the chatbot that supposedly passed the Turing Test.  Beyond this, the conversation ranges near and far covering whether it is ridiculous to suggest that Siri is a conscious being, reflective computing, NL interfaces and access to knowledge, communicating with wives, the effects of my diet, and the future of human languages when universal translation becomes widely available.

Ron is a Senior Director and Distinguished Scientist at Nuance Communications. Previously he served as Chief Scientist and a Principal Researcher at the Powerset division of Microsoft Bing.

Ron’s book Intelligent Linguistic Architectures describes his research and approach, and is worthy addition to any technical library. 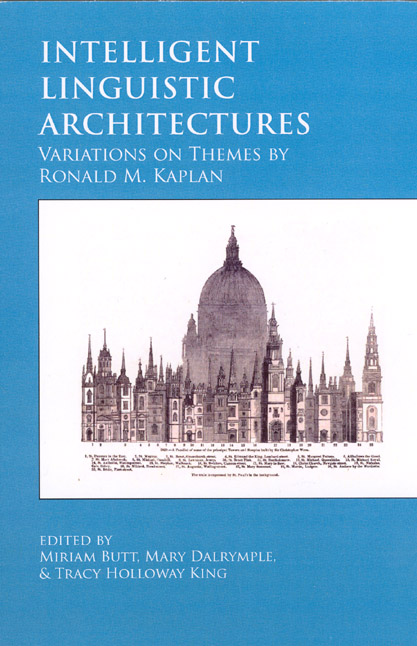 The book collects papers that are at the cutting edge of research in computational and theoretical linguistics. As all of the papers represent research areas in which Ronald M. Kaplan has made foundational contributions, the papers in the volume represent a tribute to the vital role he has played in the development of computational linguistic research and linguistic theory, particularly within Lexical-Functional Grammar (LFG).

Part one, “Generation and Translation,” contains contributions on the design of the most optimal architecture for machine translation, parsing and generation, as well as proposals for a machine translation system which successfully combines statistical methods with deep natural language processing.

Part three, “Formal Issues,” examines difficult linguistic data and their treatment in formal linguistic theory. These papers range from contributions on Optimality Theoretical vs. finite-state treatments of Finnish prosody to mixed-category constructions to theories of discourse and coordination. Foundational issues addressed include interactions between morphology and syntax in complex predicates, coordination and agreement, and the resolution of coordination asymmetries via f-structure analysis.

Part four, “Semantics and Inference,” examines the fundamental issue of compositionality in syntactic and semantic theory, and presents cutting edge research on theoretical and practical issues in mapping from linguistic structures to knowledge representations.