To Garden in Space We Need All Kinds of Robots

When existing in outer space becomes second nature to humanity it will be accompanied by gardens and robotic helpers to ensure their survival. By gardens I’m not referring to the planting of rose bushes. I’m talking about food gardens.

Graduate students at University of Colorado Boulder, are among five teams from other academic institutions who have been given the green light to develop technologies to meet a NASA challenge – grow and harvest plants distributed through a Deep Space habitat while involving the human crew as little as possible in the process. The Colorado students answer is the Distributed Remotely Operated Plant Production System (DROPPS).

DROPPS was demonstrated to a NASA team on June 23 at the Kennedy Space Center in Florida. It uses robots to do most of the repetitive tasks in tending plants. The robot they have developed is called the Remotely Operated Gardening Rover (ROGR). SmartPots or SPOTS by the dozens get distributed throughout the habitat. Each is a hydroponic growth chamber equipped with sensors and an embedded computer, all designed to continuously monitor the plants. SPOTS are equipped with LED lighting, and the technology to maintain appropriate humidity, pH and nutrition. ROGR and the SPOTS (sounds like a  rock band) are networked together. A SPOTS can notify ROGR anytime the robot is needed to ensure the plants within it are receiving necessary nutrients and are being harvested when the crop is mature.

The idea to distribute the plants throughout the habitat is taken from the way we humans live here on Earth. We put plants in our apartments and homes and live with them. We just don’t have the pleasure of being able to pluck the fruit from the vine when growing them. That the human inhabitants of a Deep Space habitat will have if the DROPPS technology is adopted.

There are other challenges humans in space will face in growing food. On Earth plants rely on natural pollinators of which insects play a significant role. Note the alarm expressed globally among fruit growers and other farmers related to the decline in bee populations. But how can you deploy bees in Deep Space? Honey bees in greenhouses have been found to be disoriented by the habitat and instead of pollinating plants tend to fly to the windows to try and escape. Bumblebees, however, don’t. But in the absence of gravity can you deploy a bumblebee and will it fly?

Other options for those growing crops in Deep Space include the development of self-pollinating strains of food crops from those that require pollination today. This would be done through genetic manipulation.

Another option would be to create a robotic bee substitute, a robo-bee. The robo-bee in the weightlessness of space would be wingless. But a robo-bee on Mars might be wing equipped and look like the one in the image below. 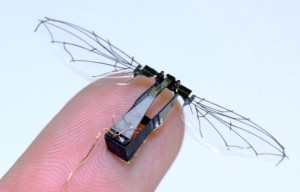 Swarms of tiny robo-bees in a weightless habitat could drift from plant to plant doing the job our bees do here on Earth. They would come sensor equipped capable of identifying plant types, flowering conditions, and when to pollinate. They would be designed to work collectively and individually. They would self organize and would be fully networked. When pollination was complete they would lie dormant until sensors indicated a new crop of plants were in need of their services. They could even be integrated with a system like DROPPS to work in tandem.

Robo-bees would come from a new field known as swarm robotics. A number of institutions have been experimenting in this field. Recently a International Journal of Engineering and Computer Sciences paper described the emerging applications that robotic swarms could undertake. One of those mentioned is pollination.

And although the gardens of a Deep Space habitat won’t experience robo-bees in flight, on Mars the gardens may be filled with them flying from flower to flower. Martians may never experience the hum of bees in flight or watch them as they dance within a flower in search of nectar. Instead maybe the robo-bees will be given a voice and a dance of their own.

This article originally appeared on his blog here: http://www.21stcentech.com/garden-space-kinds-robots/