Back in April of 2012 I wrote about the evolution of battery technology for electric cars. In the posting I wrote about lithium-ion and lithium-air technology. What I didn’t know was that a company named Phinergy was working on a different type of metal-air battery using aluminum and zinc plus air.

This week Phinergy, an Israeli company, along with the aluminum giant, Alcoa Canada, demonstrated an electric vehicle (EV) capable of driving 1,800 kilometers (over 1,100 miles between charges) using a combination of aluminum-air and lithium-ion storage technologies. The Phinergy aluminum-air battery at 100 kilograms (220 pounds) weight contained enough on board energy to allow the vehicle to travel up to 3,000 kilometers (over 1,860 miles). Compare that to the best, current lithium-ion batteries in the Tesla Model S sedan. At best they can do less than 500 kilometers (310 miles) on a single charge and the on board battery weighs 5 times as much.

How does an aluminum-air battery work? They use an air-electrode capable of breathing ambient air and extracting the oxygen from it. Compare this to traditional batteries which store and release oxygen from chemicals contained in a liquied or solid cathode. An air battery doesn’t need to replace or recharge its cathode. And an air battery is far lighter. The combination means significantly more power for a longer period of time. 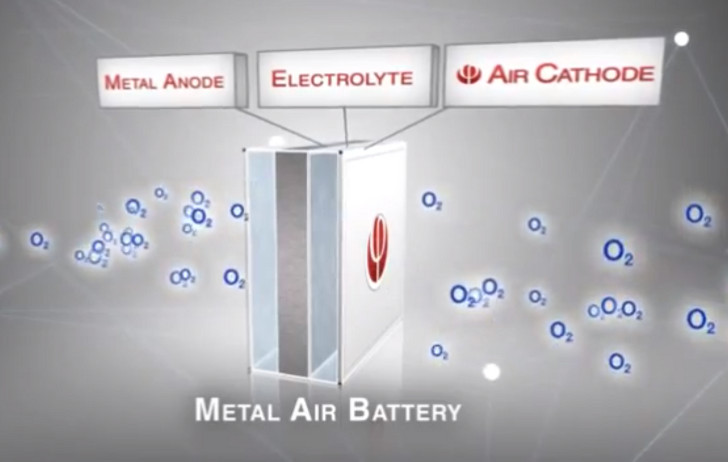 Phinergy batteries use a porous  electrode with a large surface area that captures the oxygen from ambient air. The electrode also contains a silver-based catalyst that doesn’t let CO2 interact with it. This unique and proprietary catalyst solves a common problem in air-battery technology, carbonization caused by CO2 permeating the electrode.

To make the aluminum-air battery even more economical they are produced in areas where electrical energy capacity and cost is low. In the case of the demonstration EV this week, the battery was forged at the Alcoa smelter in Baie-Comeau, Quebec where the company can draw on a significant hydroelectric power resource.

Aluminum-air batteries do break down over time. As they drain the metal turns into aluminum hydroxide. When spent the entire battery can be recycled to forge new aluminum-air batteries. For the air-battery operator it will mean swapping out the old battery for a new one every few months. This could be done at service centres which would keep an inventory of these batteries in supply. Tesla demonstrated its plans for charging and swap out service centres back in July of last year. In the Tesla demo the battery was swapped out in 90 seconds. So this notion of a quick battery replacement service that is as fast as refilling a conventional gas or diesel tank seems very doable.

In the case of the test car demonstrated at the Canadian International Aluminum Conference on Wednesday in Montreal, it was outfitted with both an aluminum-air and lithium-ion battery system. The notion behind this was that the EV could run on its lithium-ion charge when driving on short urban trips of 50 kilometers (31 miles) or less, but when used for longer trips the aluminum-air battery would kick in. To feed the chemical reaction from the aluminum-air battery drivers using a test car like this would add tap water every month or two to feed the chemical reaction.

Phinergy is also experimenting with other metal-air technologies. They have developed a zinc-air battery that has some advantages over aluminum. Zinc-air is extremely durable. A battery can last thousands of hours without chemical deterioration.

The company hopes to see metal-air batteries made with aluminum and zinc become the primary storage devices for transportation, for backing up renewable power sites, for electronic devices and for industry and defense. 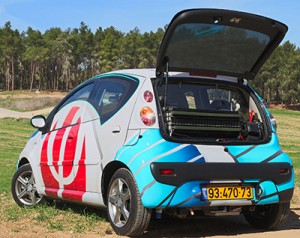 The Fraunhofer Institute for Ceramic Technologies in Dresden, Germany, has meanwhile developed a simple fuel cell suitable for the home.

Fuel cells, which resemble the jewel cases used to store CDs and DVDs (see picture below), individually don’t produce a lot of power. But when stacked together they become significant generators of electricity and an alternative source of energy for home use. With this in mind the Fraunhofer Institute along with Vaillant, a heating manufacturer, set out to build a reliable and safe residential system that could used piped in natural gas as the initial fuel source to power and heat homes.

The end result a unit that is smaller than most conventional furnaces and that generates on average about one kilowatt of power. That type of power output in Germany is equated with the average consumption of a family of four. The current field test includes a small number of homes. But there are plans in the works for a small production run to increase installations to 150 both in and outside Germany. Currently the cost for one of these units is very expensive. But as manufacturing ramps up this impediment to adoption should decline.

Each unit consists of a solid fuel cell stack with the electrolyte made from ceramic material. The material can operate at temperatures up to 850 Celsius (1,562 Fahrenheit) degrees. When natural gas is introduced to the fuel cell stack it gets converted to a hydrogen-rich gas. Oxygen ions, not electrons, are transferred within the stack in a process called cold combustion. 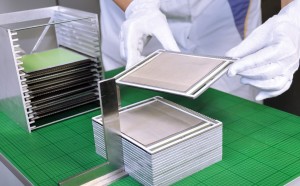 For homes this type of energy source would mean the only connection required would be to a natural gas source. The house would be able to generate all the electricity it needs without relying on power from the grid. It will be interesting to see how and when this becomes commercially available.

This article originally appeared on his blog here: