The future of robotics is filled with many different designs and applications. One of the more intriguing is the idea of small similar robots exhibiting swarm behavior and working together to build useful tools and objects or carry out particular human-required tasks.

Two schools, the Massachusetts Institute of Technology (MIT) and the Ecole Polytechnique Federale de Lausanne (EPFL) have come up with adaptive robot modules that can create new structures by self-assembling just like LEGO (TM) blocks.

In the case of MIT they call them M-Blocks, magnetic robotic cubes. At EPFL they call them Roombots, large dice-like cubes with retractable claws and servomotors. In both cases the idea is for these little boxes to self-organize and create useful larger objects such as a chair, a table, a ladder, a desk, or a shelf. The M-Blocks magnets when aligned help them to snap together. The Roombots retractable claws when extended help them grab on to each other.

Both devices can roll, climb and snap together. With on board intelligence or instructions remotely broadcast to them, a swarm of these devices could be used to investigate an emergency such as an earthquake, maneuver through areas inaccessible to humans, and then assemble to build a bridge for rescue operations. A swarm could serve those with disabilities producing and delivering the right object at the right time. For example a needed table, or a support for the person to stand. Versatility and mobility make these smart swarm robot cubes invaluable.

How do they work?

M-Blocks (seen below) contain a flywheel that rotates at speeds of up to 20,000 revolutions per minute, on board wireless communication and actuators. Current designs do not include on board intelligence but that is planned for the next iteration of these devices. Braking in the flywheel motion is used to impart angular momentum. On board magnets, including several strategically located to provide roll capability, act as the connectors for other M-Blocks. When M-Blocks detect each other they align the polarity of the magnets to form connections or jump over one another.

Roombots (seen below) contain three on board motors and wireless connectivity. The motors provide mobility. The on board wireless allows programmers to communicate with them and for them to communicate with each other. The retractable claws give them the means attach to each other or to passive structures such as walls or floors that have appropriate built-in claw receptacles.

Both are somewhat analogous to the technology depicted in the movie Terminator 2 where a disassembled android uses smart liquid steel to reassemble. But somehow M-Blocks and Roombots appear a lot more human friendly. 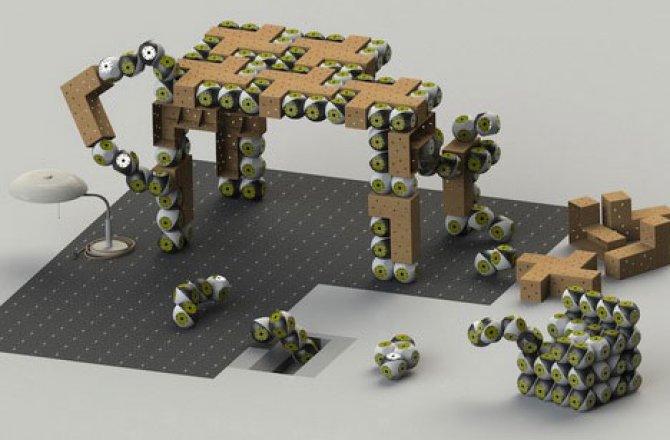 This article originally appeared on his blog here: