Which will it be? Will we regenerate organs using stem cells and switching on genes to rebuild diseased or damaged organs? Or will we take a patients own cells and bio-print organs using 3D printers? Both technologies are showing promise based on recent reports.

Scientists at Scotland’s University of Edinburgh have recently successfully regenerated the thymus gland in a mouse. The thymus is part of the immune system and when damaged can lead to opportunistic infections taking hold with the body unable to fight off the disease.

How did they accomplish regenerating this organ? They targeted a protein, called Forkhead Box Protein N1, or FOXN1. The absence of this protein is correlated with T-cell immunodeficiency. FOXN1 is commonly produced by thymus cells. By introducing a large quantity of the protein to stem cells the team was able to rebuild a functioning thymus. This is important because whether you are a mouse or a human, your thymus deteriorates as you age. By making improvements to the organ through protein regenerative techniques it means for both mice and men better immunity for the elderly. 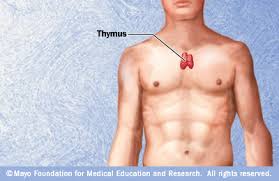 Two recent reports indicate that medical researchers are making progress in constructing organs using 3D printing technology. The first comes from the University of Louisville, in Kentucky, where a team has printed human heart valves and veins with cells. Their goal is to assemble a bio-printed heart using a patient’s own cells. They expect to have their first finished product which they call the “bioficial heart” within the next 3 to 5 years.

What are the challenges? Integrating all the various tissues they create so that they work in conjunction. A bioficial heart would have none of the issues of heart transplants where a lifetime regimen of anti-rejection drugs are necessary.

How do you print a heart? You begin with a 3D computer model and donor cells from the patient. The 3D printer then uses a mixture of a gel and the living cells to build the heart in layers. 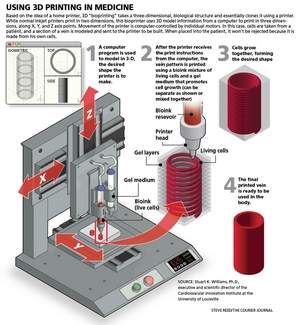 The second report comes from Tokyo University in Japan where researchers are printing artificial bones using a 3D printer. In this case the Japanese are using a bone substitute, calcium phosphate, a substance that is found in bone and teeth. The artificial bones the printer creates fuse with a patient’s natural bones over time with no complications. It is hoped that the team, which has applied for regulatory approval of its bone 3D printer, to make it commercially available by 2015.

NEXT21K.K, a Japanese medical research company, has collaborated with the University in building the printer which has shaping accuracy up to 0.1 millimeters (0.0039 inches). The technology if successful after a series of trials planned for the next 10 months, should make surgical bone grafts obsolete and should prove to be useful in restoring bone that has been removed because of cancer.

What will be interesting to see in the future is if 3D bone printing eventually leads to an inventory of spare bone parts for patients. Imagine an athlete breaking a leg and having inventory on hand to quickly repair the fracture either by printing a graft or replacing the entire bone with an exact match.

Bio-printing an organ or a section of bone while regenerating a gland appear to be complementary technologies, each capable of solving different medical conditions.

This article originally appeared on his blog here: http://www.21stcentech.com/organ-regeneration-technology-3d-biological-printing-win/