Book Review: The Human Race to the Future by Daniel Berleant (2013) 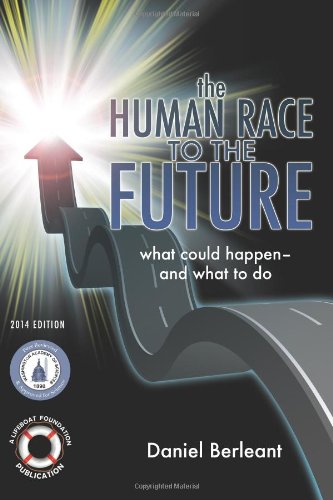 The Human Race to the Future (2014 Edition) is the scientific Lifeboat Foundation think tank’s publication first made available in 2013, covering a number of dilemmas fundamental to the human future and of great interest to all readers. Daniel Berleant’s approach to popularizing science is more entertaining than a lot of other science writers, and this book contains many surprises and useful knowledge.

Some of the science covered in The Human Race to the Future, such as future ice ages and predictions of where natural evolution will take us next, is not immediately relevant in our lives and politics, but it is still presented to make fascinating reading. The rest of the science in the book is very linked to society’s immediate future, and deserves great consideration by commentators, activists and policymakers because it is only going to get more important as the world moves forward.

The book makes many warnings and calls for caution, but also makes an optimistic forecast about how society might look in the future. For example, It is “economically possible” to have a society where all the basics are free and all work is essentially optional (a way for people to turn their hobbies into a way of earning more possessions) (p. 6-7).

A transhumanist possibility of interest in The Human Race to the Future is the change in how people communicate, including closing the gap between thought and action to create instruments (maybe even mechanical bodies) that respond to thought alone. The world may be projected to move away from keyboards and touchscreens towards mind-reading interfaces (p. 13-18). This would be necessary for people suffering from physical disabilities, and for soldiers in the arms race to improve response times in lethal situations.

To critique the above point made in the book, it is likely that drone operators and power-armor wearers in future armies would be very keen to link their brains directly to their hardware, and the emerging mind-reading technology would make it possible. However, there is reason to doubt the possibility of effective teamwork while relying on such interfaces. Verbal or visual interfaces are actually more attuned to people as a social animal, letting us hear or see our colleagues’ thoughts and review their actions as they happen, which allows for better teamwork. A soldier, for example, may be happy with his own improved reaction times when controlling equipment directly with his brain, but his fellow soldiers and officers may only be irritated by the lack of an intermediate phase to see his intent and rescind his actions before he completes them. Some helicopter and vehicle accidents are averted only by one crewman seeing another’s error, and correcting him in time. If vehicles were controlled by mind-reading, these errors would increasingly start to become fatal.

Reading and research is also an area that could develop in a radical new direction unlike anything before in the history of communication. The Human Race to the Future speculates that beyond articles as they exist now (e.g. Wikipedia articles) there could be custom-generated articles specific to the user’s research goal or browsing. One’s own query could shape the layout and content of each article, as it is generated. This way, reams of irrelevant information will not need to be waded through to answer a very specific query (p. 19-24).

Greatly similar to the same view I have written works expressing, the book sees industrial civilization as being burdened above all by too much centralization, e.g. oil refineries. This endangers civilization, and threatens collapse if something should later go wrong (p. 32, 33). For example, an electromagnetic pulse (EMP) resulting from a solar storm could cause serious damage as a result of the centralization of electrical infrastructure. Digital sabotage could also threaten such infrastructure (p. 34, 35).

The solution to this problem is decentralization, as “where centralization creates vulnerability, decentralization alleviates it” (p. 37). Solar cells are one example of decentralized power production (p. 37-40), but there is also much promise in home fuel production using such things as ethanol and biogas (p. 40-42). Beyond fuel, there is also much benefit that could come from decentralized, highly localized food production, even “labor-free”, and “using robots” (p. 42-45). These possibilities deserve maximum attention for the sake of world welfare, considering the increasing UN concerns about getting adequate food and energy supplies to the growing global population. There should not need to be a food vs. fuel debate, as the only acceptable solution can be to engineer solutions to both problems. An additional option for increasing food production is artificial meat, which should aim to replace the reliance on livestock. Reliance on livestock has an “intrinsic wastefulness” that artificial meat does not have, so it makes sense for artificial meat to become the cheapest option in the long run (p. 62-65). Perhaps stranger and more profound is the option of genetically enhancing humans to make better use of food and other resources (p. 271-274).

On a related topic, sequencing our own genome may be able to have “major impacts, from medicine to self-knowledge” (p. 46-51). However, the book does not contain mention of synthetic biology and the potential impacts of J. Craig Venter’s work, as explained in such works as Life at the Speed of Light. This could certainly be something worth adding to the story, if future editions of the book aim to include some additional detail.

At least related to synthetic biology is the book’s discussion of genetic engineering of plants to produce healthier or more abundant food. Alternatively, plants could be genetically programmed to extract metal compounds from the soil (p. 213-215). However, we must be aware that this could similarly lead to threats, such as “superweeds that overrun the world” similar to the flora in John Wyndam’s Day of the Triffids (p. 197-219). Synthetic biology products could also accidentally expose civilization to microorganisms with unknown consequences, perhaps even as dangerous as alien contagions depicted in fiction. On the other hand, they could lead to potentially unlimited resources, with strange vats of bacteria capable of manufacturing oil from simple chemical feedstocks. Indeed, “genetic engineering could be used to create organic prairies that are useful to humans” (p. 265), literally redesigning and upgrading our own environment to give us more resources.

The book advocates that politics should focus on long-term thinking, e.g. to deal with global warming, and should involve “synergistic cooperation” rather than “narrow national self-interest” (p. 66-75). This is a very important point, and may coincide with the complex prediction that nation states in their present form are flawed and too slow-moving. Nation-states may be increasingly incapable of meeting the challenges of an interconnected world in which national narratives produce less and less legitimate security thinking and transnational identities become more important.

Close to issues of security, The Human Race to the Future considers nuclear proliferation, and sees that the reasons for nuclear proliferation need to be investigated in more depth for the sake of simply by reducing incentives. To avoid further research, due to thinking that it has already been sufficiently completed, is “downright dangerous” (p. 89-94). Such a call is certainly necessary at a time when there is still hostility against developing countries with nuclear programs, and this hostility is simply inflammatory and making the world more dangerous. To a large extent, nuclear proliferation is inevitable in a world where countries are permitted to bomb one another because of little more than suspicions and fears.

Another area covered in this book that is worth celebrating is the AI singularity, which is described here as meaning the point at which a computer is sophisticated enough to design a more powerful computer than itself. While it could mean unlimited engineering and innovation without the need for human imagination, there are also great risks. For example, a “corporbot” or “robosoldier,” determined to promote the interests of an organization or defeat enemies, respectively. These, as repeatedly warned through science fiction, could become runaway entities that no longer listen to human orders (p. 83-88, 122-127).

A more distant possibility explored in Berleant’s book is the colonization of other planets in the solar system (p. 97-121, 169-174). There is the well-taken point that technological pioneers should already be trying to settle remote and inhospitable locations on Earth, to perfect the technology and society of self-sustaining settlements (Antarctica?) (p.106). Disaster scenarios considered in the book that may necessitate us moving off-world in the long term include a hydrogen sulfide poisoning apocalypse (p. 142-146) and a giant asteroid impact (p. 231-236)

The Human Race to the Future is a realistic and practical guide to the dilemmas fundamental to the human future. Of particular interest to general readers, policymakers and activists should be the issues that concern the near future, such as genetic engineering aimed at conservation of resources and the achievement of abundance.