The Future of Microgrids

A microgrid is a power grid on a small scale. It operates alone or can feed into the main power grid. Before power utilities, the electricity used by manufacturers was often generated on-site much like the water wheel used to power mills. No wires fed into these sites other than those from the local power source. But in the 20th century we moved away from that model building a model of centralized power generation distributed over a grid to electrify our cities and farms. Over time here in North America we integrated the Canadian and American grid to allow power generators to sell their products wherever electricity was needed. Today, this is the system we have here in North America, and it has its problems. 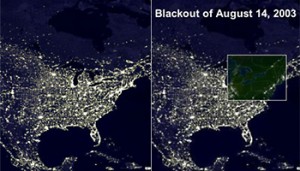 I remember the blackout of August 14, 2003 when more than 50 million North Americans lost their power (see image above). Cities from New York to Toronto were shut down. The subways, elevators, and airports of much of the northeastern part of the continent were without power for as much as two days. Although blackouts of this size are rare, our reliance on large-scale power grids leaves modern technical society vulnerable to them should something go wrong. It could be something as simple as a software bug in a computer control room at a local utility triggering a local power loss that cascades into a regional or even continent-wide power failure. It could be the falling of a tree on a local power line that is improperly handled by an operator or computer-based controller. Unless you isolate discrete parts of the grid, the entire grid is vulnerable to accidents or deliberate sabotage.

That’s where microgrids come in, the creation of local power grids that operate both in isolation or in harmony with the larger grid. Bringing power generation back to this micro approach has numerous benefits. A small network of assorted power generation technologies such as solar, wind, water-based turbines (wave and current), biogas and passive and active geothermal, combined with power storage backup (including electric vehicles) can provide the energy needs of local communities, feed a large-scale manufacturing plant, or operate all the machinery and equipment in a factory farm. There is even a play for nuclear in microgrids with next generation small scale reactors using thorium as fuel and molten salt as a heat sink to provide safe, clean energy with no nuclear waste. Integrated smarts both in distribution and consumption ensure that these microgrids would manage the ebb and flow of demand  and production far more efficiently than today’s power generation infrastructure. And in a power failure at a regional level, the microgrid could safely continue to function, generating power to its customers.

Microgrids are far more effective cogenerators than big power plants that often are quite remote from the customers they serve. Local plants can utilize the waste heat they generate as an additional energy source. In the City of London waste heat from the Tube, the London subway, today is being used to heat homes close to the source. 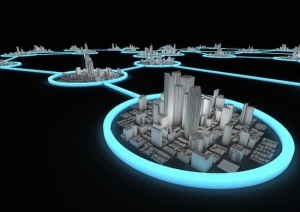 Compare the picture I have described above to what we do today. We produce electricity at coal-fired, gas-fired, nuclear and hydroelectric power plants and then we transmit it across country on high voltage lines. Remember the movie “Lost in Translation?” Well our current energy infrastructure is a different film that we can call “Lost in Transmission.” We lose between 10% and 15% of the electricity generated over transmission lines. That means for every 100 kilowatts of production we lose 10 to 15 kilowatts. Is 85 to 90% efficiency bad? No, but if we generate power closer to where it is consumed we can reduce that loss to near zero. A 10 to 15% gain when you are talking about 4,300 billion kilowatts amounts to between 430 and 690 billion kilowatts. That’s enough power to equal the consumption of close to 20% of all commercial buildings in North America.

Today microgrid capacity around the world amounts to 4,393,000 kilowatts in which North America leads producing some 2,874,000 kilowatts. That’s just a small fraction of our total generating capacity. But microgrids are growing at a good clip and particularly here in North America where two-thirds of all future capacity is in development largely because of the investment in renewable energy. And that represents the other microgrid dividend. With the use of renewable sources, not coal and other greenhouse gas producing sources, microgrids will help to reduce our carbon footprint and mitigate global warming. 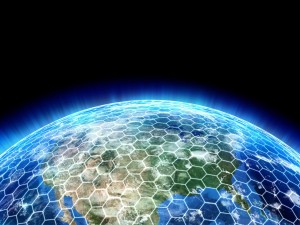 This article originally appeared on his blog here: http://www.21stcentech.com/present-future-microgrids/