Mitigating risk of Alzheimer’s Disease: More important than we thought

Recent re-analysis suggests that Alzheimer’s Disease ought to be ranked with cancer and heart disease as one of the most important mortality risks for older Americans.  Some of this risk is under our control.

In a study published last week, Bryan James and colleagues at Rush Univ. Medical Center in Chicago tell us that Alzheimer’s Disease has been greatly under-reported as a cause of death.  According to current statistics, cancer and heart disease are tied for the top spot, each contributing almost ¼ of all deaths in the US.  The new study says that AD should be right up there with heart disease and cancer, accounting for about ⅕ of US deaths.  If they are right, then these Big 3 diseases of old age together account for 70% of all deaths – not just deaths among the elderly.

Previously, AD had been listed as number 6 by the US Center for Disease Control, and the new study would move AD up to the #3 spot, which had previously been claimed by emphysema.  Emphysema is way behind cancer and heart disease, and predominantly affects smokers.  It’s almost certainly true that AD has been under-reported, and it wouldn’t take very much to move it up to #3; but whether AD really accounts for a 20% risk factor overall is less clear.  Let’s take a look at their methodology.  (or if you like you can skip ahead: What can you do about your AD risk?)

What’s wrong with this study?

The methodology of the study was straightforward.  For eight years, they tracked a group of about 2500 seniors, average age 78.  They learned if each person was diagnosed with AD, and if he died.  People diagnosed with AD had on average less than 4 years to live.  The mortality rate for people diagnosed with AD under age 85 was 4.3 times higher than otherwise (and 2.8 times higher if over 85).  These numbers (4.3 or 2.8) are called “hazzard ratios”, and as it turns out, they are an easy statistic to work with, and translate straightforwardly into inferences about the mortality risk of a diagnosis of AD.

The authors make the leap that this many deaths were attributable to AD, whether AD was listed as the cause of death or not.  Is this justified?  Think about it.  They are assuming that AD is the underlying cause and (for example) heart disease might be listed as the cause of death, but the heart disease was caused by an earlier diagnosis of AD.  But isn’t it just as likely to be the other way around?  People in danger of a heart attack may undergo bypass surgery, as a result of which the brain is deprived of oxygen during surgery and cognitive impairment results.

Or maybe there are underlying conditions (e.g., high inflammation, metabolic syndrome) that put the patient at higher risk for both AD and cancer, and then the patient dies of cancer.  It’s not right to assume that AD caused the cancer, or that this patient really died of AD.

So the authors’ conclusion that AD causes half a million deaths in the US every year is certainly overstated.  Nevertheless, they’ve got a point, and AD almost certainly should be moved up to the #3 slot, especially for non-smokers.  I believe there’s a lot of truth in the idea that mortality from AD is under-reported because the proximate cause of death is frequently something else.  If nothing else, depression and institutionalization frequently follow from dementia, and both are major mortality risk factors, under many guises.  Also, I believe in an “aging clock”: regulation of the rate of aging that derives from hormones secreted in the brain.  It is not hard for me to believe that deterioration of the brain has a direct effect on aging, and through aging on other aspects of health.

Also reported this week was a blood test that can predict (10 false positives out of 100) who will develop AD in the ensuing three years.  The work was reported in Nature Medicine by Howard Federoff of Georgetown University.  Does the test offer a clue about the etiology of AD?  Not at all.  The test was developed using formal statistical methods.  They made lipid blood profiles for several hundred people over the age of 70, testing the specific types of fats present in the blood plasma.  Then they waited three years to see which of the people might be diagnosed with AD.  Then, after the fact, they went back and used a blind, brute-force computer search to test millions of combinations of different features in the lipid profiles to look for ways in which the people who developed AD might be consistently different from the people who didn’t.  They then tested the test, applying it to a completely different group of people to see if the same test would work to predict AD for them.  It did.

There is no biology in this approach; only mathematics, and authors of the paper do not try to parse the significance of their results.

Medical science is not in agreement about the cause of AD, and it may be that the symptoms of cognitive impairment come from several causes, separately and together.  Up until a few years ago, there was a theory about amyloid plaques in the brain, tiny accumulations of misfolded proteins that the body has failed to recycle.  But that theory has faded in popularity with evidence that the plaques may be an effect rather than cause of AD.

Apoptosis of otherwise healthy neurons?  or  is it
Amyloid plaques triggering an inflammatory attack on the brain?

Everyone agrees that the proximate cause of dementia symptoms is the loss of nerve cells in the brain.  Curiously, it seems that healthy neurons may be “committing suicide”, eliminating themselves via apoptosis [ Ref1 , Ref2 , Ref3 ].  For people of my school, this is yet one more instance of the body’s suicide program, the finite life span that has been programmed into our genes by natural selection for the purpose of leveling the death rate and stabilizing ecosystems.  People who believe that aging is not programmed tell the story in terms of the amyloid plaques triggering an immune response, and it is the inflammation that leads to apoptosis.  In any case, we all agree that inflammation is a risk factor for AD, and that anti-inflammatory supplements and drugs can lower the risk of AD.  (Anti-inflammatories also offer protection against cancer and heart disease.)

What can you do control your risk of AD?

The usual stuff.  Weight control, exercise, and most everything else you do to extend life expectancy lowers risk of AD along the way.  Remaining mentally active, learning new skills, putting yourself in new situations and taking on new challenges – these are ways to keep ourselves alive and aware, and they also reduce risk of AD

Anti-inflammatories are especially helpful.  Curcumin (turmeric) is an herbal anti-inflammatory that deserves special mention because of the many studies finding a protective effect in test tubes, mice, and humans.  In India, dementia is only ¼ as commonas in Europe and America, possibly because of turmeric in the diet.  There is evidence to recommend fish oil, and also studies in which fish oil does not work.  Daily, low-dose ibuprofen lowers the risk of AD, and there are mixed reports of whether aspirin does as well.

A great number of traditional herbs have been shown to be neuroprotective.  This review of neuroprotective herbs mentions Ashwaghanda, Bacopa, Carnitine, Melatonin, CoQ10, Garlic, Vitamin D, Ginseng, and Ginkgo biloba. Here is another review of herbs that might be useful for AD.  None of these is a cure for AD, but there is some clinical evidence for benefit from each.  Readers familiar with my AgingAdvice page know that I like melatonin and vitamin D for other reasons as well.

Blueberries and perhaps other berries are protective.  A substance called fisetin (chemical cousin of quercetin) found in fruits and berries may be partly responsible.  Soy products contain phytoestrogens – chemicals which resemble female hormones.  Twenty years back, it was noticed that east Asians who moved to America and adopted an American diet had lower risk of AD, and it was hypothesized that phytoestrogens from soy might increase risk of AD.  But more recently several studies seem to point in the opposite direction, that soy might protect against AD [ Ref1 , Ref2 , Ref3 ].

I’ve reported (here and here) that since November I’ve been taking deprenyl (~1mg daily) and I find that it’s making me happy and increasing my energy, much to my consternation since I’m constitutionally anti-anti-depressant.  Deprenyl (sold as Selegiline or Emsam) is neuroprotective and it’s on the short list of drugs that consistently augment the life span of rodents in the lab.

And what is the payoff for avoiding AD?

According to the new hypothesis of James, 20% of mortality risk at all ages comes directly or indirectly from dementia.  Based on a 20% reduction in mortality, I calculate (using CDC life tables for 2010) that if we can greatly reduce risk of AD with all the above measures, starting (for example) at age 50, we might add 2½ years to life expectancy. 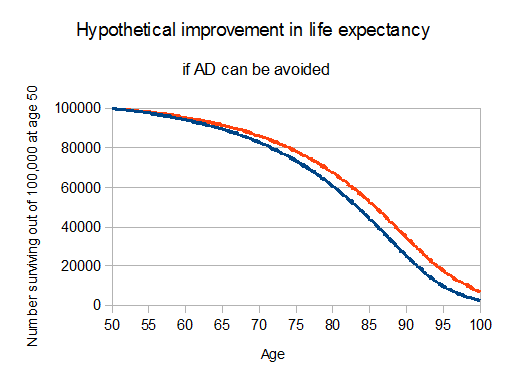 A horrible way to die, for some

The stereotypical AD patient is depressed and isolated by failure of his memory and inability to communicate.  And sadly, this is the norm as patients become disoriented and frustrated with inability to function.  But some AD patients become happy and grateful, detached from the worries that tied them down, occasionally euphoric.

Who will I be after I die?  Who was I before I was born?

We think of life and death like 1 and 0, like on and off, without a gray zone.  But it took time for our physical selves to develop, and our brains to connect up in ways that support the conception of a separate self.  In AD, the self takes about the same amount of time to disintegrate as it took to form.

Most of us have no memories before we were three.  Perhaps it takes three years for the brain to organize itself around time and events, inner self and outer world.  All that individuation that happened during the “terrible twos” is no longer part of our remembered life.  All that bewilderment, the wonder and constant questioning, a state of deep becoming.

I think of AD as the mirror image of the child’s individuation, the gradual dissolution of self.  For many of us, that prospect is terrifying, but remember that the infant also found it terrifying to become a separate self.  If there’s any benefit we can hope to derive from a lifetime of accumulated wisdom, let it be the ability to know fear for what it is: merely a genetic program, evolved to protect the individual genome and improve our chances of passing.