This series examines recurring patterns in nature, and the science of flow – how energy travels through natural systems, the patterns it produces on its way, and how we can theoretically apply those patterns to optimize manmade networks such as the Internet, transportation systems, government, mass media, etc.

As I have discussed in Designing a Sustainable Energy Infrastructure and in the Exponential Series, natural systems have evolved to become incredibly efficient. Despite our rapid progress, we still have much to learn from nature. As I will go on to explain, nature is in many ways an optimally efficient technology. The best example of this is photosynthesis, which is a much more elegant and complex system than previously understood.

All natural systems can be modeled in terms of flow — that is, inputs and outputs. Because many of the flows we see in nature have evolved over incredibly long spans of time, they represent great efficiency. Thus, we can learn a great deal by modeling these systems and understanding how they work.

Patterns of Flow in Nature

First, let’s define flow as how energy passes through a system.

“Flow systems have two basic features (properties). There is the current that is flowing (for example, fluid, heat, mass, or information) and the design through which it flows.” – Adrian Bejan, J. Peder Zane

Flow is not a thing – it is nonpoint – but we can often find its fingerprint. As nature optimizes energy distribution throughout its systems, it forms curious patterns – visual byproducts of flow optimization. 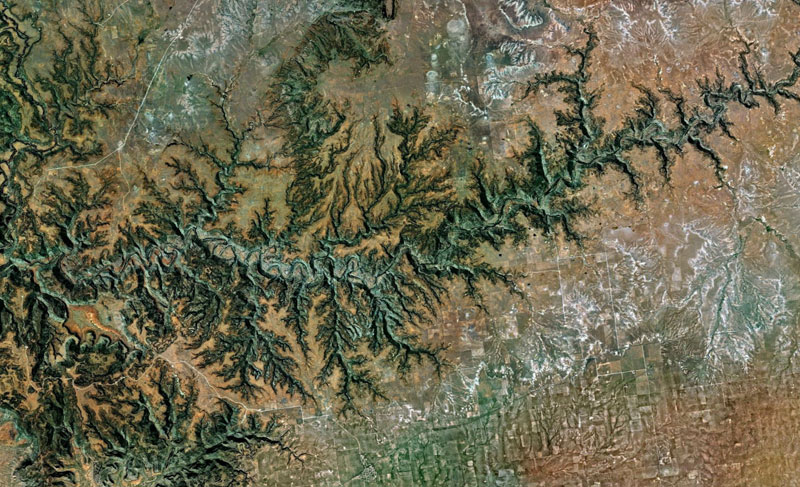 Examples of flow include electricity permeating through a metal sheet, water moving through a river delta, electrical signals jumping between neurons, or blood traveling through a circulatory system. Flow is a universal aspect of systems – living and nonliving alike.

Example: A River DeltaClick to show

Rivers share the same branching patterns as lightning bolts, cardiovascular systems, neural networks, and even cities (where roads and highways act like the circulatory systems for large urban centers). Without knowing it, manmade networks have already begun to replicate natural flow, precisely because it is most efficient. Nature evolves to facilitate better flow, which seems to adhere to the Principle of Least Effort (that is, the path of least resistance).

“The designs we see in nature are not the result of chance. They rise naturally, spontaneously, because they enhance access to flow…”  – Adrian Bejan, J. Peder Zane

In other words, the recurring patterns we see in nature are not mere coincidence. They are the result of billions of years of natural selection, and represent incredible thermodynamic efficiency. This treelike branching pattern of neurons responsible for consciousness seems to be a structural feature of the universe itself. 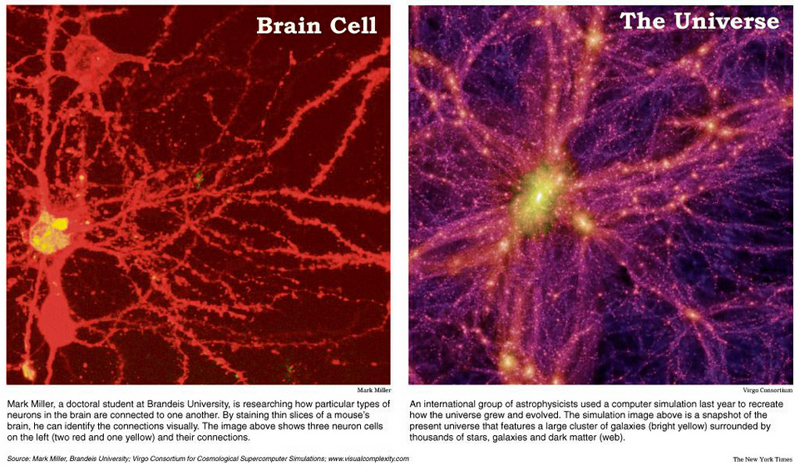 The Constructal Pattern is widespread – in fact, its treelike structure seems to be written into the very fabric of the cosmos, even down to the subatomic level. This pattern is literally found everywhere, from the subatomic (e.g.diffusion of electrons) to the super-massive (e.g. the Cosmic Web, on the scale of galaxies).

“Electrons follow the same natural laws that govern all systems that flow—electricity snaking its way from a storm cloud to Earth, rivers branching into ever smaller creeks and streams, or the spidery web of veins that distributes blood throughout your body.” –Symmetry Magazine

Curiously enough, the Internet shares a similar structure, and so does the distribution of dark matter in the Milky Way (see the Bolshoi Simulation and links in the footer). This begs the question: Is this pattern universal? Moreover, is it sentient? We already know that the dense network of neurons in our brains is directly related to consciousness. If the same pattern persists on much greater scales than that, what might it imply about our universe?[1] For a closer examination of this idea, see Information Becoming Aware of Itself in the next part of the series.

I write more on these ideas in Part 3 of the Mind Series, The Holographic Universe.

“The natural world has found ways to work and live in harmony for a long time. If we want to also survive and create sustainability systems, biomimicry may be the key.” – Creating Resilience by Following Nature’s Lead

The core idea I seek to convey here is that we can accelerate this process of coevolution – we can learn fromnature to make better technology. This is known as the field of biomimetics.

The Significance of Recurring Patterns in Nature

A common trend of technology is to seek maximum thermodynamic efficiency.  Scientists and engineers go through many design iterations to improve flow (and decrease waste heat) in new technologies. But we can take a huge shortcut by observing and emulating the designs of natural systems. Because nature is self-optimizing, it has evolved to become both incredibly efficient and resilient. The ability for natural systems to self-configure for optimal flow is a trait we should seek to emulate in new technologies. Hardware that can be “programmed” like software is a very promising start (see Reprogrammable Chips Could Allow You to Update Your Hardware Just Like Software). This model can also be applied to cognitive computing and psychology, because the human brain is essentially a flow system that configures itself for tasks it does repeatedly (the brain forms neural pathways for tasks it does often).[4]

If we want to design more efficient technologies, we already have a great template to work from, and it’s all around us (and inside our own brains). Natural flow maximizes energy distribution while simultaneously minimizing heat loss. Can this natural branching pattern (what I refer to as the Constructal Pattern) be applied to manmade systems to increase their efficiency?

A fundamental claim of this series is that the divisions we make between “nature” and “technology” are illusory. Everything’s part of the same network of space and time. So everything’s natural; everything’s a technology. Given enough time, there becomes no real difference. Jason Silva discusses similar ideas in the following video. On a related note, this website is also incredibly interesting – it uses biology as a metaphor for computing.

TO UNDERSTAND IS TO PERCEIVE PATTERNS from Jason Silva on Vimeo.

Nature and technology are not opposed. It may not seem like that today, but I understand nature and technology to be two sides of the same coin. Over time, I’d expect them to reach a mutualistic equilibrium (and I would presume this to be the trend of all life in the universe).

Interpretation of the Constructal Pattern in terms of Duality

If we view nature as meandering and technology as direct, the recurring patterns we observe across all scales – from the treelike branching of lightning to the structure of neurons to the distribution of dark matter in galaxies – may represent an optimal balance; the middle ground. (This is intentionally abstract because it borders on the metaphysical – the Constructal Pattern interpreted as the unity of yin/yang. For an expanded discussion of the “universal duality” I refer to, see this post from the Mind Series)

“The major problems in the world are the result of the difference between how nature works and the way people think.” — Gregory Bateson

Natural systems are so efficient because they’ve had the most time to evolve. Compared to the universe (a natural system which has been evolving for roughly 14.6 billion years) human technology is relatively brand new – hence the flawed notion that “nature” and “technology” are fundamentally separate. Any technology that seems unnatural may simply be a technology that hasn’t had enough time to to mimic nature’s flow, i.e. answer the flow optimization problem using nature’s Constructal pattern.

If this is accurate, then the differences between technology and nature are literally nonexistent; the only distinguishing factor is time, i.e. how long the network has had to evolve.

“Synthetic is just a word. Everything is synthetic; the question is, who synthesized it?” – H+: The Digital Series

The ideas I’ve mentioned here are discussed in greater detail in Design in Nature: How the Constructal Law Governs Evolution in Biology, Physics, Technology, and Social Organization, which I would highly recommend. 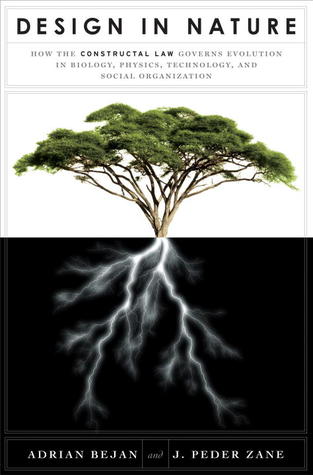