NROL-39 Nothing is Beyond Our Reach

With all the talk about the Lovecraftian logo, I haven’t seen word one on the NROL-39 mission itself. And that’s a shame because it is actually pretty cool. Formally known as ELaNa II / GEMSAT the unclassified auxiliary mission also included a variety of NASA student designed CubeSats.

On December 5, the National Reconnaissance Office (NRO) launched NROL-39 from Vandenberg Air Force Base Space Launch Complex-3E.  The last of two NRO launches in 2013, NROL-39 was the NRO’s second rideshare mission, utilizing space aboard the launch vehicle to carry an auxiliary payload into orbit.

Prior to this, in the first NRO rideshare mission, NROL-36 in August 2012, the United Launch Alliance (ULA) redesigned the Atlas V Centaur upper stage pressure system, providing additional payload volume on the aft-bulkhead of the upper stage. The NRO and ULA developed an Aft Bulkhead Carrier to host an auxiliary payload.

The NROL-39’s auxiliary payload — GEMSat — contains multiple CubeSats integrated into Poly-Picosatellite Deployers, or “P-PODs,” built by the California Polytechnic State University in San Luis Obispo, California. The P-PODs, in turn, are integrated into the Naval Postgraduate School CubeSat Launcher (NPSCul), an adapter that can attach multiple P-PODs to a single structure.

CubeSats in a P-POD

The CubeSats perform a variety of unique scientific experiments and demonstrate high-technology operational concepts. Sponsored by the NRO’s Mission Integration Directorate and the National Aeronautics and Space Administration’s (NASA) Launch Support Program, these CubeSats were developed by a number of laboratories, universities, and government entities across the United States. 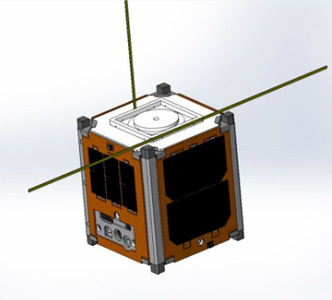 NASA Edge covered the launch and subsequent deployment of the satellites in space. In Part 1, the actual launch itself is around the 27:00 mark, but if you  want to learn more about the kids and teachers that worked on these projects watch the entire video.

The deployments occur throughout Part 2 and the first one is  around the 6:30 mark. Deployments are shown via an animation/data visualization, not live video. If you are interested in meeting the students that designed these CubeSats and learning more about what they are doing this second part is great and worth watching.