Arts: The Parahuman Sculpture of Patricia Piccinini, Posthumanity and What It Really Means to be Human

Patricia Piccinini is an Australian mixed media and multimedia artist who uses sculpture to explore one possible type of posthuman future; a future where parahumans, genetic alterations that are blendings of animal and human forms and DNA, are common place.

Her sculptures are provocative and hyper-realistic built from silicone and fiberglass and sometimes include human or animal hair, real fabrics, and other materials. Seeing them in person takes their uncanny effect to another level not possible to convey through pictures alone. These objects look real and alive despite being inanimate sculptures when they are encountered.

Piccinini’s parahuman beings are  both uncannily real and somewhat disturbing. Certain people have a hard time with these works or find them so disturbing they can’t stay near them. They are of course evocative of  horror movie monsters and horror motifs, reminding us of disturbing transformations shown in Hollywood films. In film we also see beings that are partially human but have hands or limbs that are less than human or in which their entire body is transformed over time. But in films these transformed and deformed beings are usually intended to horrify and frighten us. 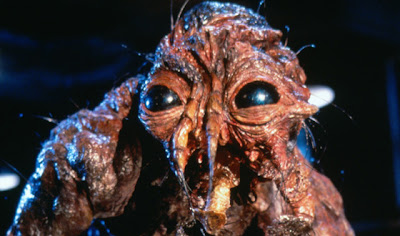 But Piccinini isn’t satisfied simply by frightening people. These beings bring into question what it means to be human, and raise questions about our ability to love and care for others that might have unpleasant appearances or deformities. Piccinini for example works by combining what would be nominally human characteristics with animal forms.

Human or pig? Possibly with a bit of aardvark mixed in? Piccinini’s sculptures are mash ups of living beings;  remix culture and recombinant DNA.

Such speculations of origins aside, these works push the limits of our ability to share affection and to empathize with entities that are somewhat but yet not quite like us. What are the boundaries of human appearance and affection? Are some beings just too different to love? Racism and xenophobia are explored here too.

Humans adopt children and love and care for children that suffer a wide variety of mutations and whom exhibit large genetic differences from their parents. Piccinini suggests that posthumans, whatever form they take, will love their children too.

Interspecies affection is actually quite common. Humans for example keep pets, and not just dogs and cats which are relatively similar to humans, but all sorts of animals such as rodents, insects and reptiles are kept as pets and their owners report having affection for them. Notably animals that are used as food sources by humans are sometimes also kept as pets, e.g. potbellied pigs.

Even amongst animals, interspecies affection and caretaking is not unheard of. Animals from different species will protect each other, exhibit grooming behavior, and share food. From Bear and Wolf Friends

And however uneasy they make us, Piccinini’s creations are far less disturbing than real deformities which humans actually endure due to injuries, diseases, etc. The Elephant Man and a woman afflicted with Leprosy

In fact these beings seem to have occurred as they are on purpose, they are not deformed, although the process of their creation might not exactly be natural. Of course the exact process of their production is unclear at best.

So while these beings might evoke the so called “yuck factor” in some people, they also invite us to share our affections and even to open ourselves to the possibility of loving them.  Piccinini is exploring some of the same places covered in Charles Burns’ fabulous Black Hole comics wherein teenagers in a 1970s era town are afflicted by an STD that turns them into mutants and monsters.

But it seems wrong to consider Piccinini’s creatures as any sort of monstrosity. These creatures are our friends and they are here to help us.

These sculptures might make us uneasy, but they are undeniably human in some fundamental way that also invites us to love them despite their sometimes shocking differences. The artist’s apparent ambivalence about their (possible) modes of creation is important especially since transgenic human/animal hybrids are already real and used in laboratory experiments, moreover some humans may desire to explore these boundaries. Piccinini invites us to consider the nature of our own humanity and its relation to that of others, even those that may appear radically different.