Being Human is a conference which was recently held in San Francisco which is the brainchild of musician Peter Baumann. This past Saturday I was lucky enough to attend this interesting and enjoyable event.

Baumann was part of the 1970s pioneering electronic pop musical group Tangerine Dream and he served as CEO of Private Music until 1994 when the company was sold to RCA. In addition to creating the Baumann foundation, he is on the board of directors of the California Institute of Integral Studies and is a fellow of the Mind and Life Institute. 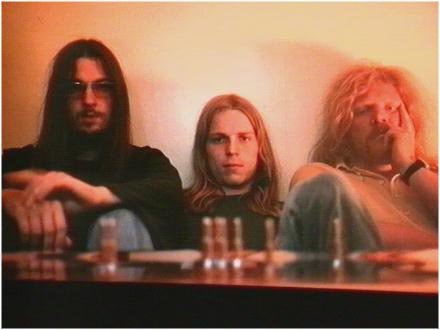 Being Human is a one day event that was organized around four panels each with a few presenters on a specific theme. The conference is interesting, informative and it’s fun. The presentations are intellectual but generally nontechnical. You won’t get a lot of data from these talks and you will have to find the reference materials online afterwards on your own. The talks are intended instead to stimulate your thinking and open new horizons. After each presentation, questions from the audience were taken and the event also included two fun musical performances.

The comfortable stage layout and Baumann’s exuberance throughout the event helped to create a very intimate experience for the audience. We all felt a bit like we were over at Peter’s house enjoying a very interesting conversation. Notably the event was streamed live online for free and is available in its entirety as a free archive as well.

The conference opened with a session on the biology and psychology of human behavior. The session will be of interest to H+ readers on a few different levels. Josh Greene’s discussion of metamorality was especially interesting and the panel discussion that followed discussing in/out group behavior and impacts of hormones on sociality.

The Biology and Psychology of Ethical Behavior from Being Human on FORA.tv

I found the high level of discussion and the limited number of questions that were answered to be problematic at times. For example, during the panel discussion at the end of the first session some results about blood glucose and willpower were mentioned. But this result is controversial and no opposing viewpoints were mentioned. Another presenter fast forwarded past several slides with experimental results and data to present a data free slide of the “Zen Presentation” sort. While a compelling presentation is important, losing the data for a picture of a kitten is not always a good presentation choice. This especially weakens a presentation that is arguably just about a set of specific experimental results. But mostly the quality of the presentations themselves was very high.

The second panel was about Human Emotions. And the third on Love and Sex. These panels were not as interesting to me as the others, but all of the panels had valuable and novel information and ideas.

Natasha Vita-More’s inspirational talk discussed some of her historical work in the area of full body prosthetics and designer bodies, including her inventions and conceptual design for posthuman designer bodies, Primo Posthuman. Dr. Vita-More further discussed the state of the art in novel medical, computer and other technologies leading to the possibility of extreme longevity via a full body prosthetic.

Some of these ideas were a bit shocking or surprising to the audience it seemed, and Peter Baumann even comments at the end of the session on his uncertainties about the future of being human.

I was originally excited to see the final presenter Data Artist Jer Thorp who presented a variety of impressive looking data visuals. But Thorp presented a series of visualizations that strangely seemed to be devoid of utility. I wanted some sort of exploration of how data science, specifically data analytics and data visualization, might impact what it means to be human. In my personal research I work with these tools within the framework of human cognitive and sensory enhancement. By analyzing and presenting data in various ways to our existing sensory apparatus, we can extend the range of the possible things that we can see and know. This also provides a useful intellectual framework for innovation and design.

Thorp’s work seemed to veer into a different direction entirely. His presentation glorified the realm of pure data apart from and unanchored from meaning. He clearly loves data. But data that doesn’t mean anything is just abstract pattern. The result were in my view a set of visualizations that are perhaps best understood as a form of abstract minimalism. These were not useful visualizations that extend human cognitive or sensory capability necessarily.  Despite this diversion, I was still glad to see data science getting some much needed attention in this forum.

This is not a conference where technical papers are presented nor is it a tradeshow or industry event. Given the full house I was curious about who the audience for this event was. I asked every single person I met who they were and why they were there. There was no real consensus on this. Some of the people in attendance are well known in San Francisco bay area technology circles. Author and WIRED Magazine founder Kevin Kelly was at the event but not presenting and investor and entrepreneur Reese Jones who is on the board of Singularity University was there and showing off a vial of designer DNA storing data which he had in his pocket. Hmm!

Others in attendance seemed to come from a variety of places and backgrounds, some were educators, and many were involved in not for profit organizations of various types. I spoke to psychology students, teachers, writers, technologists, researchers, investors, activists, artists, retired folks, and more. There were people from various age groups and many nations in attendance and I met someone from every continent other than Antarctica.

Of course most of the people in attendance were from or visiting the San Francisco Bay Area.

One thing everyone seemed to have in common, they were smart and having fun. Everyone I had the pleasure to talk with was hyper-intelligent but notably also having a really good time. These were people that were enjoying their lives and for whom learning something new was pleasurable. In fact more technology centric event hosts might learn a lot by cultivating a vibe similar to Being Human despite some of the lapses on presenting data and technical references.

In a certain sense Being Human is TED with a northern California twist. It wasn’t a coincidence for example that the Being Human team choose a weekend when the weather in San Francisco has a high probability of being amazing. This was a local event produced by people that are local and know the local scene. Outsiders frequently get this wrong in San Francisco where summer is foggy and cold.

I left thinking there was more to it than just a TED rework. Being Human might be the new form of entertainment as was envisioned  by Mark Beam in his New Minds series during the late 1990s. I’d like to see some back up data and reference material provided online. But apart from that, this was a great event that is going to continue to get better and I expect great things in 2014.