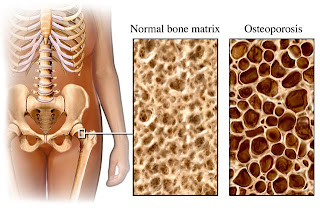 My introduction to osteoporosis came almost twenty years ago when a friend fell off his bike and (yes, he was wearing a helmet) his skull shattered, launching a brush with death and a week in the ICU.  He was 46 years old, and had taken steroids all his life to control asthma.  No one told him that steroids leach calcium from the bones.  After precision medical care and an extraordinary act of will, he recovered fully.

He had never been tested for osteoporosis, but after the accident his doctors prescribedFosamax (=alendronate, similar to Actonel, Boniva), which was standard treatment at the time.  Fosamax increases mineral bone density (MBD), the calcium content of bones, which had been the standard diagnostic for osteoporosis.  It has been discovered since then that though the MBD is higher, the bone is actually weaker.  Fosamax increases the risk of hip fracture.  Fosamax side effects include heart arhythmia which could be merely uncomfortable or could lead to congestive heart failure.  In some patients, side effects include nausea, vomiting, diarrhea, and stomach cramps.  In recent years, Merck has defended several thousand individual lawsuits over fractures suffered by people taking Fosamax.  (There is as yet no class action.)

Bone loss is common – some would say universal – as we age.  Men get it as often as women, though women fracture hips with twice the frequency of men.

We should all be taking precautions that will delay and lessen the impact of osteoporosis.  Two of the best things we can do are exercises for strength and keeping our vitamin D levels up.  Both measures have multiple benefits, beyond bone health.  Exercise is the best anti-aging tonic, the best anti-depressant, and contributes to every aspect of health and well-being.  High blood levels of vitamin D help prevent infectious disease and cancer.  Next time you have blood drawn, find out your vitamin D levels, and target 60 or higher, 100 or more if you have osteoporosis.  Few people have optimal vitamin D levels, and (depending on your personal metabolism and ability to absorb it, and also how much time you spend in the sun) it may take supplementation with tens of thousands of IU daily to get up to these levels.

Plentiful calcium in the diet may be necessary but not sufficient.  Curiously, calcium supplements alone have been found to be only marginally useful for osteoporosis.  Foods that are high in calcium include dairy, green leafy vegetables, and shellfish. Be sure to getenough vitamin K2. (another ref) For people with celiac tendencies, avoiding gluten is helpful.  Here are Dr Mercola’s recommendations.

For post-menopausal women, hormone therapy lowers the risk of osteoporosis, but women and their doctors consider multiple pros and cons in making this decision.  Some say that bioidentical hormones offer the benefits of HRT with a lower downside.

People on low-calorie diets generally experience robust health, stronger, more energetic, less susceptible to virus and bacterial infections.  As a group, they (I should say “we”) have but two complaints: we chill easily, and we are prone to osteoporosis.  Conversely, carrying extra weight may be bad for all other aspects of health, but it helps to promote bone growth.  This effect is not large, however, and I don’t recommend gaining weight as a remedy for osteoporosis.

Bones are alive, and far from static.  They are continuously being broken down and reformed within the body. When it works, this dynamic process keeps the bones strong and healthy.  Bones contain two kinds of cells, whose names differ by a single letter: osteoclasts and osteoblasts.  They are the yin and the yang of bone remodeling.  The blasts build new bone and the clasts tear down old bone.

The traditional view has been that loss of bone mineral density (BMD) comes from an imbalance between these two processes.  Most present drugs target the clasts, seeking to lessen bone resorption, rather than accelerating the formation of new bone by the blasts.  (The exception is Forteo, which promotes new bone growth hormonally, and has its own downsides.)  But the two processes are metabolically linked, and it may be that maintaining turnover is vital to bone health, independent of the measured BMD.

Fosamax is in a class of drugs called bisphosphonates, which function by poisoning the clasts. Prolia (=denosumab=Xgena)  prevents creation of new clasts, but does not interfere with the old ones.  It requires delivery by injection, usually just twice a year.  It seems to work better than Fosamax and the bisphosphonates, with fewer side-effects.  The mechanism of Prolia is to inhibit a signal called NF-kappa-B. which, in turn, regulates gene expression and apoptosis (cell suicide).  So Prolia may be expected to have a cascade of effects through the metabolism.  The worst of these might be to impair the immune function of white blood cells, since both T and B cells require NF-kappa-B in order to mature.  Despite this caution, there is reason to believe that the net side effects might be anti-aging and anti-inflammatory.  Curcumin and caloric restriction are both good things, and both inhibit NF-kappa-B.  On the other side, here is an article by Lara Pizzorno, who is down on both bisphosphonates and Prolia.    She points out that Prolia has only been licensed since 2010, and there have not been enough people taking the drug for long enough to know whether some of them will experience the same “atypical” hip fractures that have plagued users of Fosamax.  She thinks that bones are strengthened by the ongoing process of remodeling, and that bone resorption is half of the yin and the yang of that process.  Thus any drug that works through inhibiting bone resorption can be expected to behave as the bisphosphanates do, improving nominal MBD, while actually weakening the bones.  Time will tell if she is right.

The up-and-coming drug is called odanacatib, and it has already undergone more than 15 years of tests, but still has not been submitted for FDA approval.  Odanacatib can be taken orally (every two weeks) and it interferes with a chemical signal called collagenase cathepsin K, and thereby inhibits bone resorption.  It is reported to have less severe side effects than Fosamax or Prolia, but again it works by inhibiting resorption, so by Pizzorno’s theory, it might turn out to have the same fatal flaw.

Forteo (teriparatide) is the only medication that promotes new bone growth rather than inhibiting resorption.  It is a synthetic variation on human parathyroid hormone, and is usually self-injected on a daily schedule.  It has uncomfortable side-effects, and is associated with bone cancer.  For this reason, it is approved for treatment courses of two years or less.  Forteo’s benefits disappear quickly when you stop taking it.

And so we come to a favorite theme of mine: the role of the insulin metabolism in aging.  The simple view is that the body can operate in either of two modes.

Mode #1 corresponds to rapid aging, self-destruction, poor health.  “Metabolic syndrome” is another name for Mode #1.  Mode #2 is slow aging and robust health.  Insulin is a signal that swtiches the body between these two modes.

What I have just learned is that osteoporosis is plugged into this system.  The osteoblasts that build bone are sensitive to insulin.  Insulin signals the body to add bone mass, but also dials up the self-destruction of aging.  The osteoblasts, in turn, secrete a hormone called osteocalcin, which helps to keep the body in mode #2 (where we want to be). Osteocalcin is activated in the process of bone resorption.  If this is correct, then it may be unwise to interfere with bone resorption.  The premise of the mainstream of pharmacology for osteoporosis is called into question.  In the short run, we may be able to tip the balance between bone anabolism and bone resorption by dialing down the latter, but we do so at the price of accelerated aging, which will get us in the end.

Concerning prescription drugs, I wish I had better news.  There are no good options for treating osteoporosis, only good compromises.  Furthermore, the low-calorie diet that I often recommend as your best path to staying young longer adds to your risk of osteoporosis.  Perhaps this provides more incentive to pursue a non-prescription path, and to start earlier.  Quoting Pizzorno:

Published in the prestigious Journal of Environmental and Public Health, the COMB study(Combination of Micronutrients for Bone) unequivocally demonstrated that providing our bones with the nutrients they need along with regular weight-bearing exercise is as or more effective than any of the bisphosphonates or strontium ranelate (the unnatural drug version of strontium). And a lot less expensive!

As one of the lead researchers, aptly named Dr. Stephen Genius, noted, not only was this combination of nutrients that bones require “at least as effective as bisphosphonates or strontium ranelate in raising BMD levels in hip, spine, and femoral neck sites,” but the nutrient supplement regimen was also effective “in individuals where bisphosphonate therapy was previously unsuccessful in maintaining or raising BMD.”