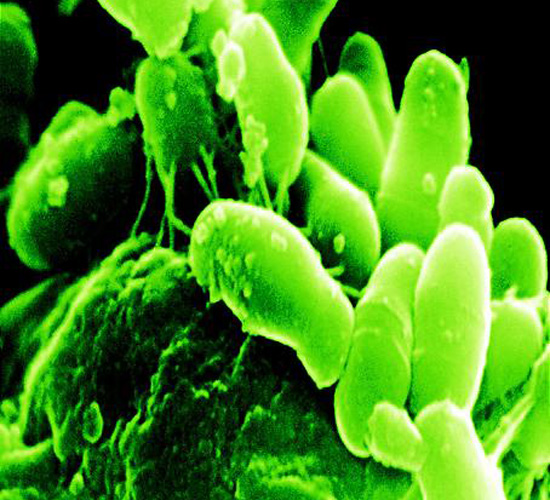 We learned a couple of things recently:

1) According to Science Magazine, “the adult human intestine is home to an almost inconceivable number of microorganisms. The size of the population—up to 100 trillion—far exceeds that of all other microbial communities associated with the body’s surfaces and is ~10 times greater than the total number of our somatic and germ cells.” Or to put it simply, they outnumber us.

And they may even be us, as this intestinal Amazonian ecosystem “provide[s] us with genetic and metabolic attributes we have not been required to evolve on our own, including the ability to harvest otherwise inaccessible nutrients.”

An organ within an organ, in other words.

2) Sounding like a modern Mesopotamian domestication program, Yuichi Hiratsuka and his colleagues “have chemically harnessed bacteria to a micromotor so that they can make the device’s rotor slowly turn.” 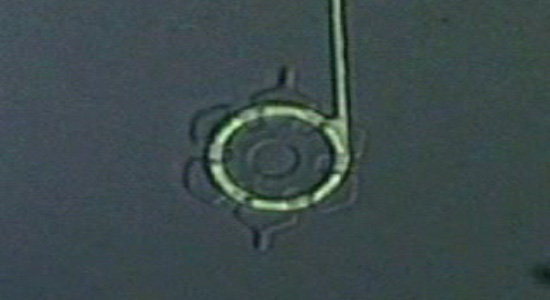 Pardon us while we quote nearly half of this article:

The machinery of each motor consists of two parts: a ring-shaped groove etched into a silicon surface, and a star-shaped, six-armed rotor fabricated from silicon dioxide that’s placed on top of the circular groove. Tabs beneath the rotor arms fit loosely into the groove.

To prepare the bacterial-propulsion units, the team used a strain of the fast-crawling bacterium Mycoplasma mobile that was genetically engineered to crawl only on a carpet of certain proteins, including one called fetuin. The researchers laid down fetuin within the circular groove and coated the rotor with a protein called streptavidin.

The scientists then coated the micrometer-long, pear-shaped bacteria with a solution containing biotin, a vitamin that readily binds to streptavidin.

The team released the treated bacteria into the grooves in a way that sent them mostly in one direction around the circle. As the microbes passed each of a rotor’s supporting ridges, their biotin-treated cell membranes clung to the streptavidin coating, causing tugs on the tabs and thereby turning the rotor.

Slow and weak, the rotors circle at about twice the speed of the second hand on a watch and generate only a ten-thousandth as much torque as typical electrically powered micromachines do. By using more bacteria, the scientists could boost the torque 100-fold, Hiratsuka predicts.

What should be done next is repurpose these micromachines for our own gut microbes. First encase them in a capsule. Once you’ve swallowed the whole lot, an instant zoo of mechanized anaerobic bioreactors blooms in your intestines. Harness the energy they produce to power, say, your iPod while you take a podcast tour through electrified or unelectrified locales.

Ingest a similarly encapsulated scanning electron microscope and project real-time photos as you ramble incomprehensibly through 30,000 years of agricultural terraforming at the next Pecha Kucha or Talk20. From post-lapsarian Eden to the rise of hydroengineered Mesopotamian civilizations; from massive European swamp-draining to the first transatlantic shipment of tomatoes and potatoes; from Jefferson’s “no-nonsense (and topographically nonsensical)“ Land Survey grid to precision farming; from the staggering network of hydroelectric dams, reservoirs, levees, canals, and ditches irrigating the deserts of the West to the compact urban Vertical Farm; from the heroic American farmer in stoic communal with the sublime to the much maligned supranational industrial megafarmer; from John Deer to GMO rice; from Wheatfield to Not A Cornfield — all in precisely 6 minutes and 40 seconds.

Alternatively, you can program them so that you shit — well, what else — a shitty park. Your whole intestinal tract turned into a sort of Model T Ford assembly line. 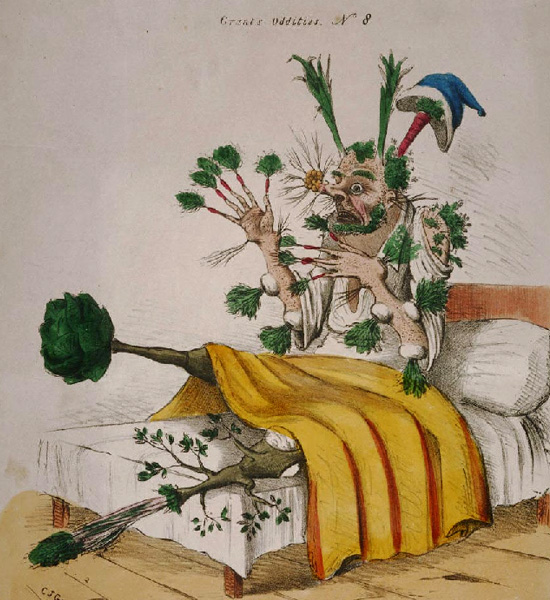 I was very intrigued by a crowdfunded, citizen-scientist project to “characterize the microbial diversity of the Global Gut.” Those that have donated will receive a sampling kit and instructions on how to collect stool samples. Once sent back to the lab, the samples are then genetically sequenced to create a portrait not only of your own gut flora but also, if you chose the pricier options, your entire family and furry pets, ultimately mapping a heretofore underexplored ecological system, a microscopic yet planetary-crossing garden of bacteria, viruses, eukaryotes and fungi.Phase I has already been funded and is closed to volunteers, but you can still join in the fun in Phase II. I’d be curious to hear what the diversity of this microbiome has to inform us about geography and food systems (or vice versa).Meanwhile, this reminds me of an interesting research from 2006, in which scientists at Japan’s National Institute of Advanced Industrial Science and Technology “put bacteria to work, powering a tiny rotary motor etched out of semiconductor material,” as The New York Times described their work. Nearly akin to shire horses harnessed to a horse mill, “[t]he bacteria glide along a circular channel attached to a 20-micron-diameter rotor, turning it at a rate of roughly 2 r.p.m.”According to one of the scientists, the goal “in the long distance is to make a medical machine, something like Proteus,” referring to the miniature submarine in the 1966 filmFantastic Voyage. In the middle distance, perhaps they could coat a volunteer’s intestinal tracts with bacteria-driven nano-motors. His gut flora having been cultivated to extraordinary verdancy, thus churning his mechanic hortus conclusus into full throttle, he’ll be able to power an iPad.

How about programming it into a stool battery factory. On some nights, he takes a shit in the garden to power his outdoor light fixtures. The entire urban waste infrastructure will have to be rethought.

In Phase X of the Global Gut project, participants will be mailed an assembly kit. They only need to swallow it. Once ingested, they’ll be part of an international mass cyborgification of a human organ, later forming part of a cloud network. It’s the gut server farm.