It was with a certain amount of disappointment that I originally learned the details of the plans that were announced earlier today for PayPal Galactic. To tell the truth I really was hoping this was going to be an amazing and groundbreaking announcement about space. Instead it looks like a pretty ineffective marketing stunt. 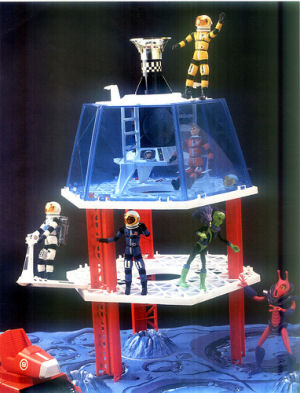 When I was a kid growing up in the nineteen sixties, the best present I ever got was my Major Matt Mason Moon Base and associated characters. Space habitation and the prospects for man to live happily and fruitfully in space were staples of my childhood and also my early explorations of transhumanist thinking thanks to the L5 Society.

While it was never clear what exactly Major Matt was doing on the moon, mining was certainly part of it. And later of course Major Matt got into the business of defending Earth against alien invaders with the help of his constantly gun wielding ET friend Captain Lazer. But we were always sure he had something to do and it was important.

PayPal Galactic: What exactly is it?

Good question. Watch the video below to learn more.

This is a research project into how people will “get paid” and “buy things” while in space and how payments and similar transactions will occur to/from space and Earth. It is not really a proposal for a specific architecture or method for doing anything at this stage.

PayPal’s President David Marcus states, “As space tourism programs are opening space travel to ‘the rest of us’ this drives questions about the commercialization of space.  We are launching PayPal Galactic, in conjunction with leaders in the scientific community, to increase public awareness of the important questions that need to be addressed.  We may not answer these questions today or even this year, but one thing is clear, we won’t be using cash in space. PayPal has already pushed payments into the Internet,onto phones and across terrestrial borders. We look forward to pushing payments from our world to the next, and beyond.”

ABC News reports that Anuj Nayar, the senior director of public relations for PayPal wondered aloud “Are we smoking crack?”

Maybe not Anuj, but PayPal Galactic is an idea that is pretty far away from impacting real space exploration in any significant way and I seriously doubt it will produce revenue that will show up in PayPal’s quarterly results either.

It is true that there are a number of interesting technical problems with existing mediums of exchange in space. Credit cards and debit cards might not work due to radiation. Historical mediums of exchange such as precious metals, currency and coin are simply impractical to use in space because of transportation and storage costs. Network delays to deep space regions such as the asteroid belt might enable or encourage fraud. However it is pretty unclear what new ideas this effort brings to the table.

PayPal Gallactic is not the first idea for a space based currency either. TravelEx previously introduced a futuristic looking medium of exchange called the QUID. Differing colors and sizes denote differing values and each QUID includes a unique serial number which they claim will help prevent counterfeiting. Notably QUIDs avoid sharp edges that might be dangerous in zero g environments. QUIDs are just “space safe” coins in fact. Ok, QUIDs are somewhat silly. But reality check….payments and financial transactions have already been made from  space using the existing Internet connection to the International Space Station.

Predicting the Future is Hard

In my view this initiative falls prey to a common mistake of futurists and it is one I have made myself. The issue is that often one considers the ramifications of only a single or  a certain set of “interesting” technologies in isolation from others that are also developing and evolving simultaneously. That is clearly the case here.

For example, Planetary Resources has plans to mine asteroids using robotic spacecraft, the ARKYD Series 200 Interceptor and the ARKYD Series 300 Rendezvous Prospector. These machines will initially be controlled from Earth and the materials returned to Earth for sale. So in reality asteroid miners will likely be able to use existing Earth based payment systems.

Eventually an economic system and society will exist extended through the solar system. However it is unclear what such an interplanetary society  needs to buy from Earth once it is established. Most of the material wealth of such a society would be “off planet” and manufacturing could be performed off planet and space based as well using robotic systems.  NASA recently demonstrated the ability to perform “3D Printing” in space.

While it might seem attractive to imagine a future “space gold rush” with space miners buying smart shovels and asteroid mining robots, the development of a fully capable 3D printing capability in space means Earth imports might be limited to specialty products that can’t be produced in space such as naturally occurring Earth based biomaterials of various types, historical Earth artifacts, art, and perhaps some other items or materials that are just harder or more expensive to make outside the gravity well.

An asteroid based interplanetary society could be self providing and sustainable. According to asteroid mining company Planetary Resources, “A single water-rich 500-meter-wide asteroid contains 80 times more water than the largest supertanker could carry and could provide, if the water were converted to rocket propellant, more than 200 times the rocket fuel required to launch all the rockets ever launched in human history.”

Further, the material resources and wealth of an extra-planetary society would  eventually vastly outstrip that of an Earth based society and especially those of existing planetary nation states. Planetary Resources again, “a single platinum-rich 500 meter wide asteroid contains about 174 times the yearly world output of platinum, and 1.5 times the known world-reserves of platinum group metals (ruthenium, rhodium, palladium, osmium, iridium, and platinum).”

In a fully developed interplanetary society, off worlders might be rich beyond current human imaginings. In my view future humans, transhumans and post humans will  construct a space based abundant society in which scarcity will be erased and the need for a conventional medium of exchange as we imagine it now will be entirely eliminated. Imagine Burning Man’s gift economy in space. An L5 potlatch.

But not right away.

Initially developing a space based economy will cost billions of dollars in investment and little or no value will be produced or returned. (See: http://www.jetpress.org/volume4/space.pdf for example.) This early high investment low return environment doesn’t really require a space based transaction system either since most of the heavy lifting in space wil be done by robotic vehicles controlled from Earth.

The only reason for a space based payment system at this time is to support space tourism. But in the short term that is largely an Earth based enterprise. Once people start visitng orbital locations, i.e. the planned “space hotel”,  a standard Internet connection to Earth will provide all that is needed for space based transactions. This connection already exists and is in use to communicate with the ISS.