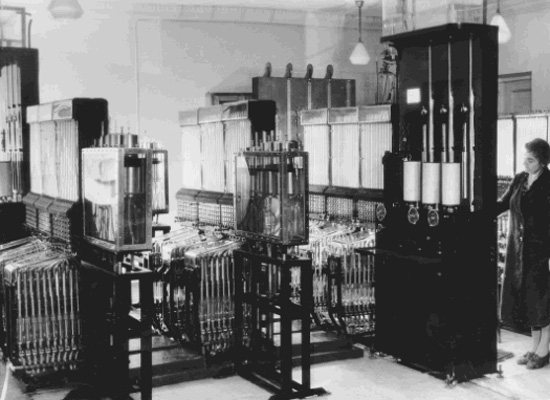 I only recently found out about Google’s reverse image search functionality. Since then I’ve been
busy feeding its search engine some of the more mysterious images that have been littering my
archives for years, hoping finally to figure out what they are actually pictures of, and why I even
found them interesting enough to keep in the first place.One of those images is the one you see
above. According to a translation of this article published by the Russian magazine Science and Life
in 2000, it shows one of the “monuments of science and technology” that “brought [the Soviet Union]
to the forefront of the analog computer” — Vladimir Lukyanov’s marvelous water computer.Built in
1936, this machine was “the world’s first computer for solving [partial] differential equations,” which
“for half a century has been the only means of calculations of a wide range of problems in mathematical
physics.” Absolutely its most amazing aspect is that solving such complex equations meant playing
around with a series of interconnected, water-filled glass tubes. You “calculated” with plumbing.To
better explain how it works, here is a description by Steven Strogatz of what I’m assuming is a
comparative device. Built in 1949, nearly a decade and a half after Lukyonov’s, it’s called the Phillips
machine, after its inventor, Bill Phillips.

In the front right corner, in a structure that resembles a large cupboard with a transparent front, stands a Rube Goldberg collection of tubes, tanks, valves, pumps and sluices. You could think of it as a hydraulic computer. Water flows through a series of clear pipes, mimicking the way that money flows through the economy. It lets you see (literally) what would happen if you lower tax rates or increase the money supply or whatever; just open a valve here or pull a lever there and the machine sloshes away, showing in real time how the water levels rise and fall in various tanks representing the growth in personal savings, tax revenue, and so on.

“It’s a network of dynamic feedback loops,” Strogatz further writes. “In this sense the Phillips machine foreshadowed one of the most central challenges in science today: the quest to decipher and control the complex, interconnected systems that pervade our lives.” 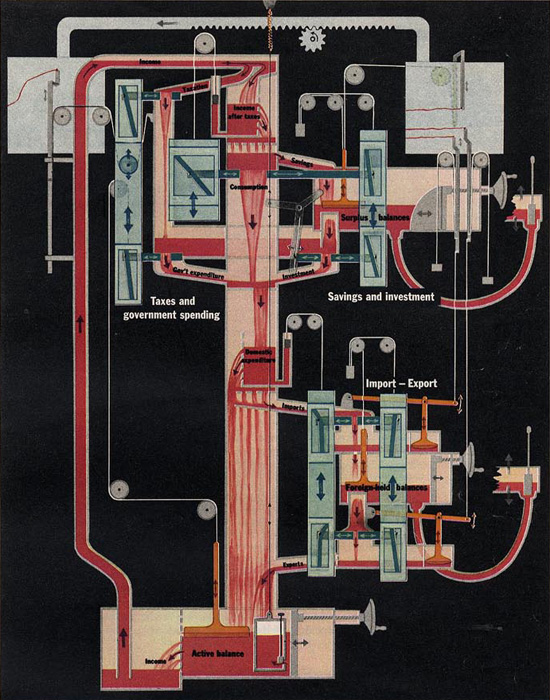 To go back to Lukyanov, his water computer was built specifically to solve the problem of cracking in concrete, a “scourge” that slowed the construction of railroads by his employer. Doing so meant developing manufacturing regimes for concrete blocks that took into account the complex relationships between material properties, the curing process and environmental conditions. Existing “calculation methods were not able to give fast and accurate solutions.” Lukyanov’s invention did.

Appropriating and altering Strogatz’s text, we get:

Filling up not just a corner but the entire room, inside not one but several structures that resemble large cupboards with a transparent front, is a Rube Goldberg collection of tubes, tanks, valves, pumps and sluices. You could think of it as a hydraulic computer. Water flows through a series of clear pipes, mimicking the production line of concrete blocks. It lets you see (literally) what would happen if you change the type of cement used or increase the load capacity of the concrete or whatever; just open a valve here or pull a lever there and the machine sloshes away, showing in real time how the water levels rise and fall in various tanks representing material properties, curing time, temperature, and so on.

Changes to the water level in the “measuring tube” would be marked on a graph paper (“a kind of curve”), and “these marks build schedule, which was the solution of the problem.”

Because of the simplicity of their design and programming, subsequent models were “successfully used” in other fields such as geology, thermal physics, metallurgy and rocket engineering. The first and second generations of digital electronic computers could not match their computing abilities. In the mid-1970s, they were still being used in “115 manufacturing, research and educational institutions located in 40 cities” across the Soviet Union. “Only in the early 80s” were digital computers cheap, configurable and powerful enough to match the “possibility of [the] hydraulic integrator.” 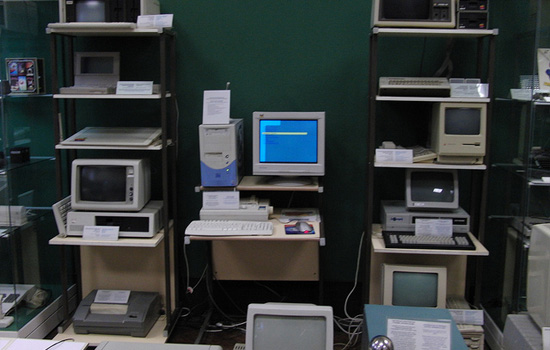 Having briefly traced the history of water computers forward from Lukyanov to the rest of the 20th century, I can’t help but thread the timeline backward to include some of the most elaborate hydraulic engineering schemes used in sprawling aristocratic gardens of early modern Europe, such as the always indispensable Versailles, the hydro-acoustically drenched Tivoli, the masterworks of Salomon and Isaac de Caus, and one of my top favorite gardens, Pratolino.

Garden historians usually characterize the technical control of water in stately gardens as part of a system of social control. As an alternative, or at least to offer another layer of meaning, this augmented timeline presents a crypto-historical narrative of gardens as gigantic water computers. 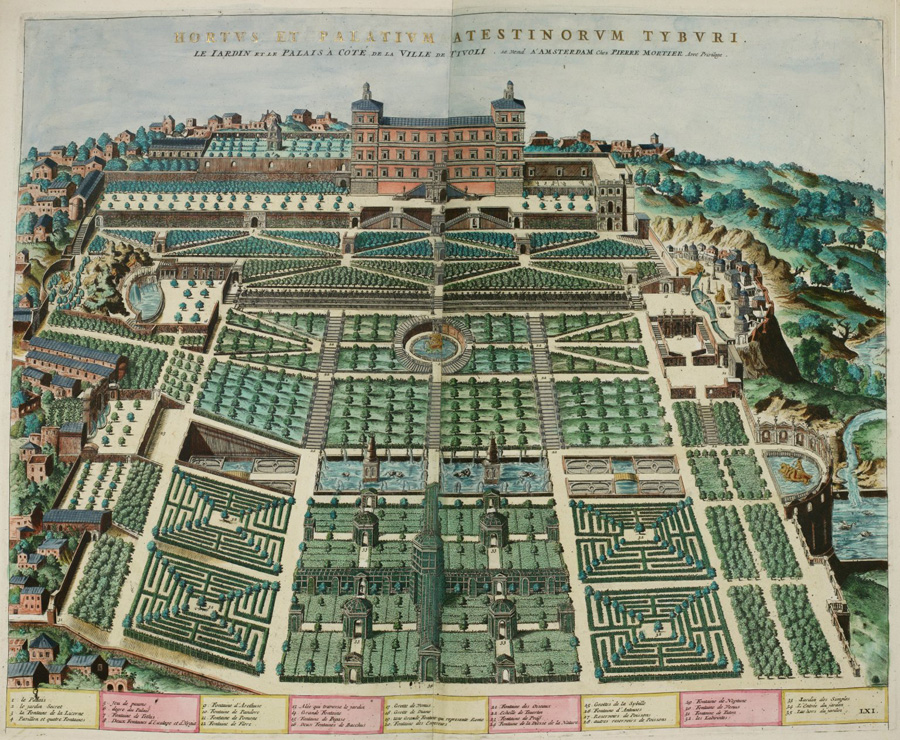 All those water-screws, force pumps, water-lifting wheels, vents, wells and settling tanks, all those reservoirs, canals, aqueducts and pipes buried under mountains and rivers, and all those jets spurting out of vases and statuaries, creating water rainbows and sonic merriment, and all those fountains, water parterres, giochi d’acqua, automatas and damp grottos: those are the gurgling circuits, the programmable interfaces, the data storage devices and the visualization screens of landscape proto-supercomputers.

To operate it, you will have to consult an unpublished edition of Solomon de Caus’sLes raisons des forces mouvantes, avec diverses machines tant utiles que plaisantes, auxquelles sont adjoints plusieurs dessings de grotes & fontaines, from which the following may have been excerpted:

Embedded in the earth is a Rube Goldberg collection of tubes, tanks, valves, pumps and sluices. You could think of it as a hydraulic computer. Water flows through a series of clear pipes, mimicking the way that money flows through the empire. It lets you see (literally) what would happen if you lower the price of bread or increase the construction of palaces or whatever; just open a valve here or pull a lever there and the machine in the garden sloshes away, showing in real time how the water levels rise and fall in various tanks representing colonial trade supplies, food riots, and so on.

Attached to the measuring tube is a series of fountains that gurgles the solution to the equation. 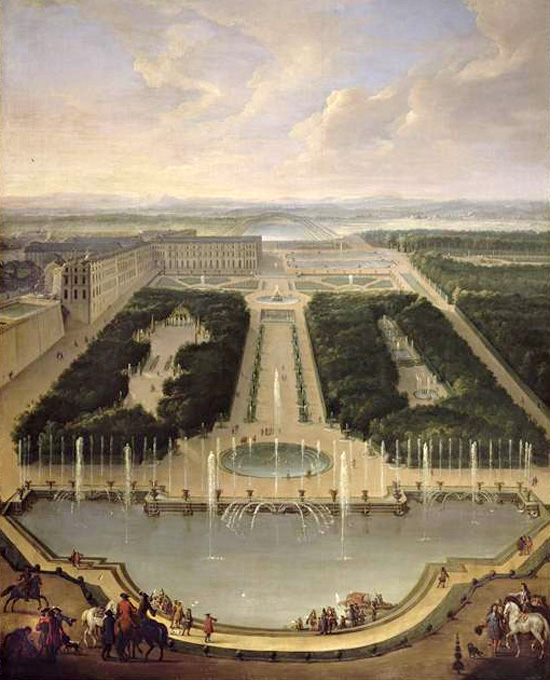 Gardeners and their patrons would then walk around marking the fluctuating levels of these fountains on graphic paper. From fountain to fountain, they follow a set of programmed perambulations, gathering data at relevant nodal points, along the way not just picking up the solutions to the problem being computed but also gaining a greater understanding of the complexities of the natural and social worlds.

With these gardens as crypto-water-computers, they were taking measurements of the universe. 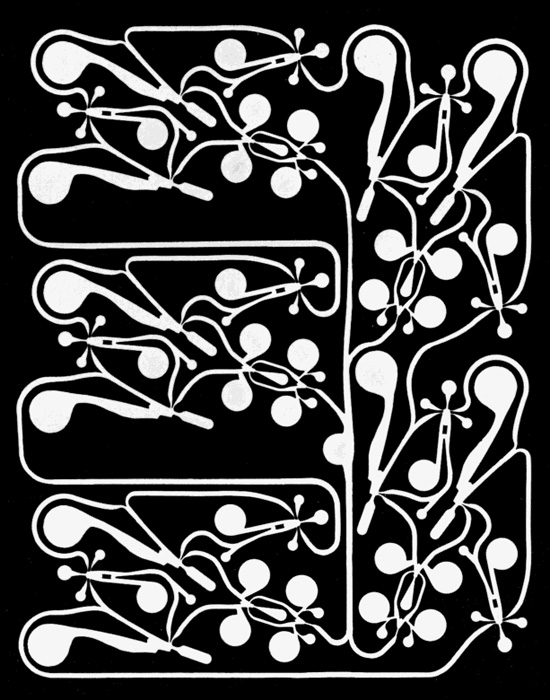 The above image appeared in an article published by Scientific American in 1964. It’s actually a photograph, believe or not, of a block of plastic “chemically etched” with “fluid control devices,” which are basically an arrangement of channels. Streams of fluids are pumped through these micro-canals, and applying the principles of fluid dynamics, one could manipulate their meandering course through this network. 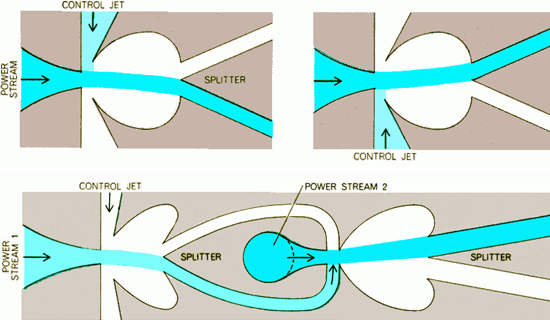 In one fluid-control technique described by author Stanley W. Angrist, a high-energy stream of fluid, called the power stream, is first injected into a fluid control device. If left to itself, the power stream clings to one wall of the channel in which it is flowing, and as a result exits through an outlet on that side. The stream can be diverted to a second outlet on the other side by injecting a stream from a side channel.

If you think of those two outlets as representing “on” and “off” (or “0” and “1”) and the side channels as flip-flop switches, then it’s easy to see how a fluid control device “corresponds to a triode that turns a flow of electrons on or off. It is essentially like an element in a digital computer.” One can even design it “to act as a logic gateexpressing the concept ‘and’ or ‘or,’” thus, if you build and connect enough of them, you could have an “all-fluid digital computer” that can model the most complex algorithms. There are even certain set-ups that display “a property that amounts to memory, and it can be put to use for that purpose.”

To repeat: a property that amounts to memory! 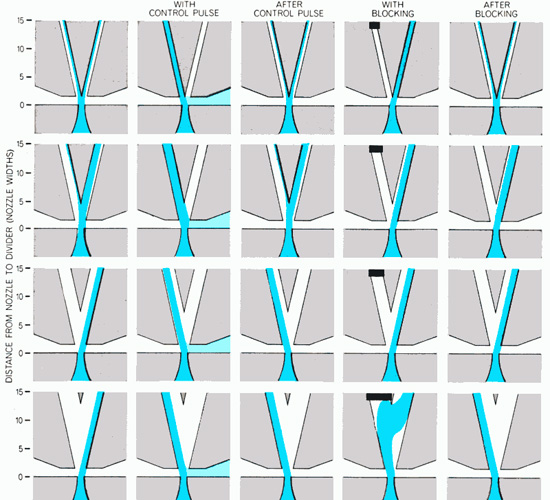 No doubt I’ve oversimplified or misunderstood the concept and potential of these fluid control devices, so I suggest reading the article in full and the Wikipedia entry on fluidics. There’s also an article archived on Modern Mechanix, one published in 1960 and claiming that these devices “could rival electronics within 10 years.” In fact, returning to the Scientific American article, Angrist spells out their “distinct advantages over electronic devices. They are simple in construction, have virtually no moving parts, can be powered by almost any source of energy to pump the fluid, are immune to damage by heat or ionizing radiation (which electronic equipment is not) and would be comparatively inexpensive if mass-produced.”

In any case, owing to a vague resemblance of the opening image to the serpentine lines of an irregular garden, such as the garden at Petit Trianon on the super-formalized grounds of Versailles — and to the enduring popularity of an earlier post in which I sketched out an alternate version of garden history — one can’t help but propose reconfiguring Petit Trianon into a water computer.

It’d be a kind of experimental subfield of historic preservation, in which Le Rouge’s plan for Marie Antoinette’s pleasure ground is purposely misunderstood as the schematics for a fluidic motherboard. 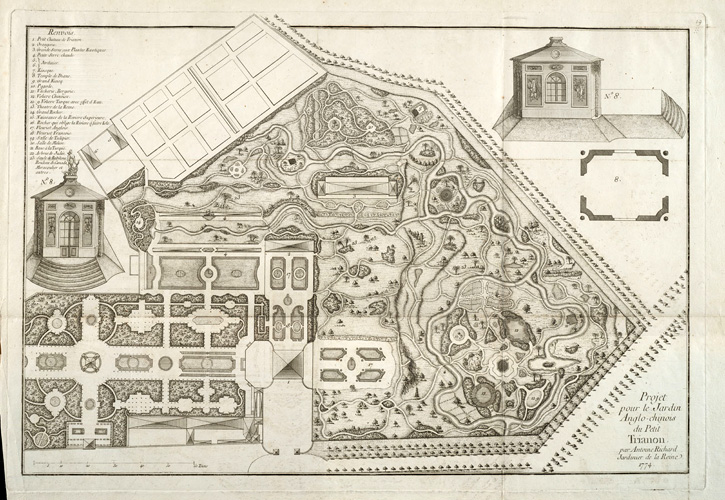 You could also reconstruct the whole of Versailles, afterwards augmenting it with several Versailleses, and in the process gobbling up other gardens of the Ancien Régime that have since disappeared, though their plans still exist in the basements of national libraries, ready to be misread as circuitry.

That is, into miles of fluidic circuitry etched into the earth; modules bulging out artificial hills, outlook mounts and facsimiles of Mt. Parnassus; valved artificial lakes as input devices; water parterres as logic gates; grottos as maintenance access to the bowels of this great tectonic machine; with esoteric Freemason symbols as instructional manuals; and a decorative program of Diana Efesinas as display consoles. 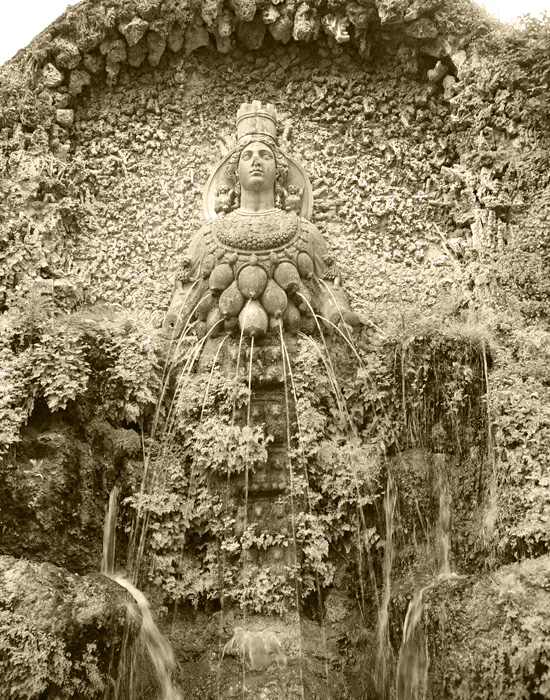 Moving from one Diana Efesina to another, which could be quite an epic perambulation, and taking notes of the hydro-matrix barcodes being printed by these water-emitting diodes, one will eventually gather all the data needed to model…what exactly?

How about the motions of planets and stars? 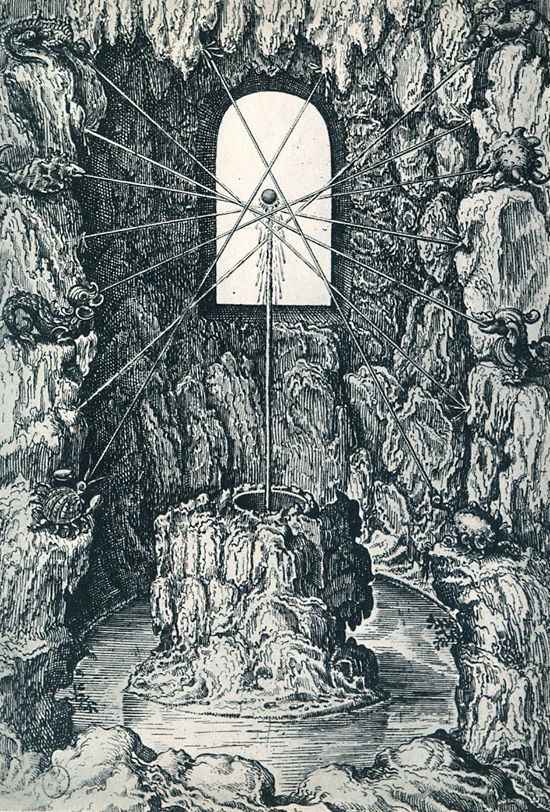 Adjust the pumps on this fountain and the pumps on that fountain and a thousand other interconnected water features, and soon enough you will have calculated the day when Jupiter reaches its next perihelion or the earth-crashing orbit of a previously unknown asteroid. The garden will open up the universe and all its wonders to humanity, but will also announce the date of their Second Exile.