Medical literature classes deprenyl as an MAO-B inhibitor. What does that mean?

For non-specialists, the story should start with neurotransmitters. The electrical network of the brain is modulated chemically by neurotransmitters that determine how easily and strongly its signals are transduced. Dopamine, adrenaline, melatonin and serotonin are all common examples of mono-amine neurotransmitters, named for a chemical structure they have in common. Neurotransmitters are constantly being produced in response to stimuli, and broken down so their levels in the brain can be adjusted from moment to moment. The breakdown is accomplished by an enzyme called a mono-amine oxidase. There are two closely-related forms of these breakdown chemicals, known as MAO-A and and MAO-B. Type A breaks down all four of the MAO’s listed above. MAO-B specializes in dopamine.

Two important things to know about dopamine are (1) that it’s essential to the brain’s reward center that makes us feel good in response to social cues or sex or food or whatever, and (2) Parkinson’s disease is caused by death of cells in the midbrain that manufacture dopamine, so that dopamine levels are very low in Parkinson’s patients.
The last word in the description is “inhibitor”. “Mono-amine oxidase inhibitor” is a double negative – it prevents breaking down the neurotransmitters, so more of them circulates. Deprenyl in particular prevents the breakdown of dopamine.

All of this provides good support for understanding the function of deprenyl as a Parkinson’s drug and anti-depressant. But why should it affect aging? Why should it protect the brain? It has been known for 20 years that deprenyl protects nerve cells from toxins and even can help to rescue nerve cells after they have been damaged. Though the mechanism is not understood in detail, there are some clues. Neural growth factors have been found to increase in the brain.  Superoxide dismutase (SOD) and catalase are part of our natural protection against oxidative damage, and and both these are enhanced in the brains of people taking deprenyl. Glutathione is another of the body’s natural protections which has been found to increase (in rats) in response to deprenyl. This same study found a larger density of neurons and better retention of learning abilities in deprenyl-treated rats.

Personally, I have never taken deprenyl. In fact, I’m a purist about the quality of my consciousness – some would say obsessively so – and I stay away from caffeine, alcohol and marijuana, let alone prescription anti-depressants. But I know people who have taken Selegeline as an anti-depressant, with results that seemed to me to be noticeable from the outside. With Selegeline, they were inspired to new creative projects, full of enthusiasm, less realistic about follow-through and detail. That’s my personal observation.

And here’s a red flag: Deprenyl metabolizes to methamphetamine. Though I have no personal experience with methamphetamine, it certainly gives me pause if I were to consider deprenyl for myself, or recommend it to anyone. Why is it that deprenyl seems far less addictive and less destructive to personality than methamphetamine? It may be because typical dosages of deprenyl are small compared to recreational dosages of meth.

The first rat study was done in 1988 by Knoll himself (discoverer of the drug), with spectacular results. Though deprenyl treatment was not begun until the rats were middle-aged, the treated rats still lived 34% longer than controls. Subsequent rodent studies continued to show significant life extension, but no one found the dramatic results claimed by Knoll. 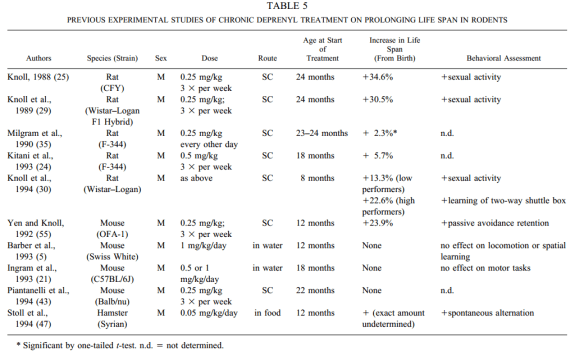 Why the difference in results? Part of the discrepancy may have to do with dosage. High dosages of deprenyl can shorten life span, as reported by a Japanese group in 2006.

There was one study on dogs, significant because dogs live longer than mice or rats, and caloric restriction (CR) is proportionately much less effective in longer-lived animals. Does deprenyl behave like CR, with proportionately smaller effects in long-lived species? The results from this one experiment give a tantalizing suggestion: perhaps not; but the study was terminated too early to offer a quantitative estimate of life extension. The study included 33 dogs that were more than 10 years old when they were first placed on deprenyl, but the study was terminated before most of the dogs died, making it difficult to estimate the life extension benefit. 80% of the deprenyl-treated dogs survived to the end of the study, but less than 40% of the untreated dogs.

We can’t help but get the impression that deprenyl has a lot of potential as a life extension drug, and that the subject cries out for more research.  Knoll has come out quite explicitlyrecommending deprenyl as a generalized anti-aging tonic.  Most of the nutritional interventions that we know about that extend life span in animals work through the insulin pathway that governs the caloric restriction response. This may mean that simultaneously cutting calories while taking resveratrol and metformin has less benefit than what you might expect by adding the benefit of each of these separately. Deprenyl, however, seems to work through an independent pathway, so there is reason to hope that whatever longevity gains it offers are in addition to those from caloric restriction and CR mimetics.

We may be surprised that a stimulant can lead to longer life. What happened to “Speed kills”? Most of our intuitions about the rate of aging are based on the idea that the body is wearing out, and faster we move, the quicker we wear out. This is the “rate of living” hypothesis, which is discredited, as as I wrote a few weeks ago.  We should remember that physical activity leads to longer life span. We should think in terms of hormesis – the body’s paradoxical response to hardships and challenges. In fact, deprenyl extends life expectancy in small doses, but is toxic in higher doses – the signature of hormesis.

Is this for me?

People taking deprenyl for life extension report palpable effects on mood and energy. Meanwhile, the impact on life span is distant and largely untried in humans. If you like the way deprenyl gives you more energy, more enthusiasm, more ideas, then the thought that this drug may extend your life is a nice bonus. If you find that the drug makes you nervous and raises anxiety, if you lose sleep and are separated from your inner being, then tipping your odds for future longevity will not be worth it.

Just a few days ago, I received a missive embodying the wisdom of the East. It came from a fortune cookie at my local Chinese take-out, and its message read: “The quality, not the longevity of one’s life is what is important.”

For basic information about healthy living for a long life, see the author’s permanent page at AgingAdvice.org.