Cold Temperature and Life Span: It’s not about the rate of living

In 1986, John Holloszy of Washington University immersed his lab rats in shallow, cool water for four hours each day. They burned so many extra calories that they ate half again as much as control rats, but weighed less. The cold rats lived 10% longer, on average. Holloszy framed his report on this experiment not as a hormetic effect of cold exposure, but as a refutation of the “rate of living” hypothesis.

In 2006, Gordon Lithgow of the Buck Institute for Aging Research exposed lab worms to repeated heat shocks, and they lived 10-20% longer. Lithgow’s group noted that in response to the treatments the worms generated a surge of a protective hormone dubbedheat shock protein, and that heat shock protein also increases life span. They matter-of-factly reported their results as an example of hormesis, demonstrating that between 1986 and 2006, the concept of hormesis had worked its way into the field and become commonly integrated into gerontologists’ thought process.

Hormesis is the name for the paradoxical adaptation that makes animals live longer when they are exposed to challenges and hardships. Starvation, various toxins in low doses, infections, heat and cold can all lead to a longer life . These are not merely quirks of the physiology, but deep and ancient adaptations for the purpose of stabilizing population. The population death rate, like everything else about life, is homeostatic. That means that when something in the environment – perhaps a famine or an epidemic – is killing off part of the population, the rest of the population responds by toughening up and living longer. At the individual level, this is manifested as a slow-down of the aging process when starvation or other hardship is sensed. The response is managed by a logic system that works very much like a computer, but it is based on a web of hormones and chemical signals, in addition to neural circuits.

“Rate of living” theory – more lives than a cat

The new study, announced last week at the high-profile annual meeting of AAAS, also claimed to discredit the “rate of living” theory. In fact, a quick literature search reveals that this theory was discredited in 1956, in 1986, in 1989, again in 2002, in 2004, in 2007, and in 2009. In fact, August Weismann clearly saw through it in the 19th Century, thirty years before the eponymous book by Raymond Pearl proposed that faster metabolism leads to faster aging. In my most frequently cited academic publication, I, too, have railed against “rate of living”.

You don’t even have to know that bats burn 3 times as many calories as mice and live 10 times as long; the simple fact that sedentary people die early while athletes enjoy enhanced longevity would banish the idea that our bodies become damaged from use and simply wear out over time.

What is the power of this idea, that it continues to haunt the theory of aging, generation after generation? The appeal is its familiarity and common sense. Everything that we make, our tools and articles of clothing wear out over time. We imagine that biological aging must be related to the reason that knives get dull and auto bodies rust. (Nassim Taleb would say we are confusing the cat with the washing machine.)

This serial error comes from misunderstanding the Second Law of Thermodynamics. The Second Law says that entropy must increase in any closed system. This is indeed related to the reason that washing machine bearings wear out after a few years. But living things are not closed systems. They take in free energy from food or sunlight and dump their waste entropy back into the environment. The ability to do this is not a technicality; it is a fair definition of what life is, what distinguishes living from non-living things. All of life is an end run around the Second Law, and this is what enables us to grow and to learn, to increase in complexity. There is no physical requirement that living things should deteriorate over time – else how could we ever grow up?

Genetic mechanism for response of aging to temperature

The UMich study, published in Cell last week just as it was announced at AAAS, starts with an examination of genetics and cold treatment in the lab worm, C elegans.  Worms that are kept at lower temperatures live longer than worms kept at higher temperatures. No surprise there – here is a reference from 1908. Temperature modifications in both directions have been observed to increase life span of cold-blooded animals, and, to a lesser extent, mammals as well. The news is about discovery of the means by which worms adjust to colder temperature in order to lengthen life span.

“The extended lifespan observed at a low temperature cannot be simply explained by a reduced rate of chemical reactions,” reported Dr Shawn Xu of University of Michigan. “It’s in fact an active process that is regulated by genes.” (ref)

In particular, Xu’s lab discovered that the gene called TRPA-1 is necessary for the life-extending signals to find their mark. When TRPA-1 is knocked out of the worm’s genome, life spans is actually shortened in response to cold. Another gene necessary for life extension from cold temperature is the famous DAF-16, which was identified a dozen years back as the Grand Central Terminal of anti-aging signals in worms.

The Xu study goes on to relate the mammalian response to cold (Holloszy’s experiment above) to life extension in worms. That same TRPA-1 gene has a homolog in mammals that serves a similar function. Exposed to cold, mammals do a good job of keeping their core body temperatures steady in a cold environment by burning more fat, by shivering and by increased activity. That they live longer nonetheless demonstrates that their life extension is not a consequence of physiology but a choice made through hormonal signaling.  He notes that the same gene, TRPA-1 that is activated by cold in worms and mammals can also be triggered by eating Japanese horseradish (wasabi).

Just for fun, I looked for demographic evidence that human longevity responds to cold. I found in Wikipedia tables of longevity and of record high and low temperatures for each of the fifty U.S. States. Record temperatures weren’t very representative, and state average temperatures are hard to define, so I used as a surrogate the average January temperature in the largest city of each state. Here is a scatter plot of Life Expectancy vs Avg January Temperature, for the contiguous 48 states: 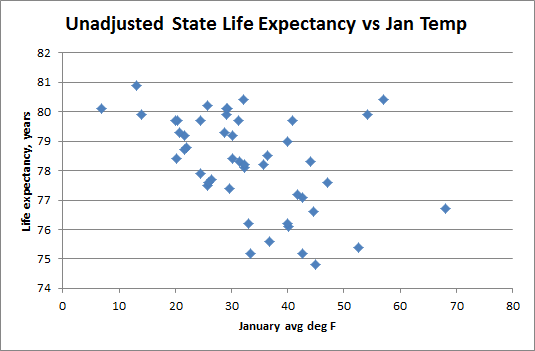 Visually, you can see a downward trend. Regression analysis gives R2=0.21, significant at p<0.001. The outliers in the upper right are Arizona and California, which have high incomes and warm Januaries.

I suspected that these results were too good to be true, because there’s a powerful relationship between income and longevity. Some of the poorest states happen to be in the American Southeast, where temperatures are warm. To correct for this, I found (also in Wikipedia) figures for median family income by state, and sure enough life expectancy had a much stronger relationship to income than to temperature (R2=0.49, p<2*10-8). 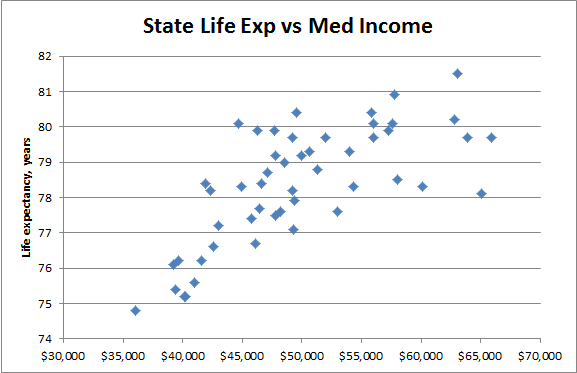 After removing the effect of income, I plotted the residual variation in life expectancy against January temperature, and lo and behold, results were a bit more significant than the relationship for raw life expectancy (R2=0.16, p<1*10-5). 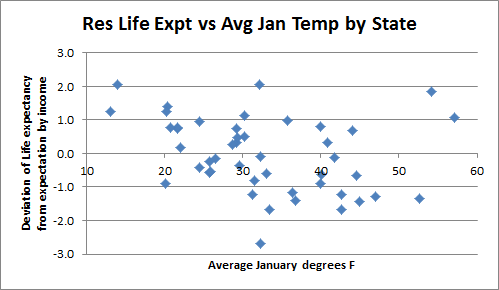 Despite the direct simplicity of the comparison and the impressive statistical significance, I would not claim that this proves anything about a response to cold in human longevity. It may be that this is an artifact of the way life span is reported, or a reflection of the fact that Americans like to retire to warmer climates. These and other hypotheses need to be explored. This is what makes science complicated (and epidemiology fraught with contradiction). We might begin our skepticism by comparing Northern and Southern Europe. Scandinavia has much higher incomes but slightly shorter life spans than the Mediterranean.

So my longevity advice for the day is to enjoy a walk in the bracing air while we’ve still got some winter left, and come back in to plateful of sushi with extra horseradish.