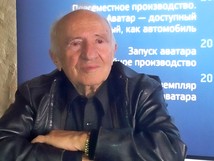 David Dubrovsky, co-chairman of the Scientific council of the Russian Academy of Sciences for artificial intelligence modeling.

Cybernetic immortality – fantasy or scientific problem? I can answer that right away. It is a scientific problem – of approximately the same type as the problem of people going into outer space, which was proposed by Tsiolkovsky at the turn of the 20th century.

Why, despite the support of important scientists (such as V. Turchin, C. Joslyn, R. Kurzweil, A. Bolonkin, B. Bainbridge and others), is this idea rejected by many, or at best treated with skepticism?

There are many reasons for this. Firstly: the scale of this super-project, which really does verge on fantasy, is too “overwhelming”, for the “average” scientific mindset, which is mundane and cautious, and too dependent on the opinion of the scientific management. Anything is proposed nowadays if financing can be secured for it. I’m not even talking about the colossal growth of false science – charlatans, mages, “miracle-workers”. All of this throws a shadow on the idea of cybernetic immortality.

Furthermore, we are now only at the approach stage of a solution to this problem, specific steps for its development are in many ways only at discussion level, and creative solutions are required. The eternal idea of immortality has been expressed in myths, legends and religious beliefs. Hence the prejudice that it is not compatible with science.

But no matter what people say, the idea of immortality still holds a rank of the highest value in human culture, and expresses the fact that humans are not reconciled with death. “The will of the human being to immortality is a natural continuation of the will to life”. These are the words of the outstanding scientists and authors of the famous “Cybernetic Manifesto”, Valentin Turchin and Cliff Joslyn. They note that the power of religious teachings and their deep-rootedness in culture has always been based on the promise of immortality an of life beyond the grave. However, under the influence of critical scientific thinking, these promises are becoming increasingly illusive for the general public. And now, they say, “the successes of science have made it possible to raise the banner of cybernetic immortality”. This banner is being raised by the 2045 Initiative, and there are already over 15,000 people in this movement, including many important scientists, and their number will swiftly grow.

What is the basis for the conviction that the problem of cybernetic immortality is a real scientific problem?
It does not contradict the principles of science. In fact, it finds a theoretical basis in them – above all, in the fundamental principle of the iso-functionalism of systems, which essentially heralded the beginning of the computer era. The idea of this principle is that the same complex of functions may be reproduced on substrates with different physical properties. Hence the fundamental possibility to reproduce the functions of a living system and the brain on non-biological substrates, which also fully applies to mental functions.

Extensive prospects for this are opened by the convergent development of NBICS (nano-technologies, bio-technologies, information, cognitive and social technologies, and fields of scientific knowledge corresponding to them). Mutually enriching each other, these technologies create unprecedentedly powerful methods for transforming the human and the social environment, in particular, the possibility for constructing systems that are capable of reproducing the functions of life and thought on non-biological substrates. This is the path of trans-humanistic transformation, the transfiguration of the mind and the personality.

Let us move from theoretical considerations to the scientific and practical results that have already been achieved. It is hard to list even the most important of them. The human genetic code and genome have been deciphered. The first artificial organism has been created on this basis. There have been successes in deciphering the cerebral codes of mental phenomena.  There are achievements in the field of robotics and artificial intelligence. Integral bio-electronic systems have been created. Prosthetics of internal organs and extremities are developing rapidly. Recently, French scientists created an artificial heart, which has been put into mass production. A paralyzed person can have an electronic chip put into their brain, allowing them to move a computer cursor and a wheelchair with their thoughts. Issues of creating an artificial body have been raised and begun to be solved, along with many other tasks which were unthinkable until very recently.

The problem of the artificial body requires creating a self-organizing system of a non-biological type – at the first stage, probably, with the inclusion of biological components in it. The combination and unification in a single system of biological and non-biological forms of self-organization is a transitional stage on the path towards the radical prolongation of life and cybernetic immortality. At the sametime, this is the path towards transforming the nature of the human being, human consciousness, and as a result earthly civilization. It is impossible to change society without changing the human being. Our irrepressible consumerism, aggression, egotistical willfulness – these are the causes of the destruction of the natural world and the social environment itself.

The process of trans-humanistic transformations organically involves the formation of new meanings, values and goals of life activity, which expand the horizons of the mind, restricted by the biological and earth-bound way of existence. It is extremely difficult from the position of our own minds to imagine the mind of the future rational being that is freed of them problems of biological corporality (pain, disease, fatigue, low instinctive drives, the decrepitude of old age). But undoubtedly, this will be a mind with much higher values, meanings and goals, which are not polluted with trifling cares, motives, ambitions, worries, and the fuss of our present-day life.

The project that is promoted by the “2045” Initiative is sufficiently specific, and sets the main stages of advancing towards the main goal. This megaproject is extremely necessary for our scientific community, which lacks powerful spiritual stimulus; it is capable of inspiring talented scientists, to awaken new creative forces, and the will to great accomplishments. A great goal gives rise to great energy and strength of spirit. The high mission of the “2045” Initiative is to develop and consolidate a new ideology, and on the basis to create a new community, capable of concentrating the intellectual, financial, organizational and media resources necessary for realizing the super-task. Unfortunately, and surprisingly, to this day not a single political party or political leader has set a long overdue and momentous task of this scale.

Undoubtedly, the concept of cybernetic immortality requires thorough development in future, and many very complex issues must be solved. We should be aware of simplifying a number of approaches to this problem. It is difficult, for example, to agree with the position of A. Bolonkin which he vividly outlined in 1998 (in an interview with Izvestiya newspaper on 8 September). He said that soon the power of a supercomputer will surpass the information power of the brain. We will be able to record all the information from the neurons of the brain on to an electronic chip. Thus, an immortal “electronic person” will be created, who will be able to take any type of bodily shell, will not need to fear radiation or extreme temperatures, will not need air and water, and will be able to travel freely in outer space at the speed of light.

Not to mention the fact that A. Bolonkin’s prediction proved to be overly optimistic (he promised that immortality would be achieved by 2020), his concept draws objections. Yes, the IBM company announced that by 2019 a supercomputer would be created with an information capacity equivalent to the human brain. And they were quite serious! But what comes from this? Even if we allow the possibility of recording all (?) information on to a chip, this will not be enough to create an “electronic person” – a personality as an independent, thinking, self-aware being. Here the most important thing is lacking – the thing that has called awareness, which has the inalienable quality of subjective reality. The most complex and difficult thing in the problem of cybernetic immortality is reproducing on a non-biological medium the self-organization of information processes, which create the quality of subjective reality.

According to data from neural science, this quality is realized at the level of the Ego-system of the brain – a special structural and functional subsystem of the brain, which is responsible for the personal qualities of the person (it is also called “selfhood”). The ego system is a conscious and unconscious circuit of information processes, and includes two mutually connected levels: genetic and biographical, reflecting the history of the personality and its awareness.

A study and understanding of the specific functional structures of the Ego system of the brain, and their self-organization can open paths for creating an equivalent functional structure on a suitable non-biological substrate. Of course, we are still at the beginning of this path. But neural sciences are developed at extremely fast rates, and there are grounds to believe that in the next 10-15 years, there will be a major breakthrough in this field.

However, besides the focus on the results of studying the brain, this dynamic functional structure may also be constructed by a method independent of them, on the basis of a phenomenological analysis of the awareness, thinking, complex forms of activity and construction of models of them (these are the areas that are called “artificial intelligence” and “artificial life”). On this path, serious breakthroughs are also possible in the near future.
It is important to stress that theoretically, we may also conceive of variants of the desired self-organizing functional structure that differ from structures invented by biological evolution. They may also be more “simple”, economical and reliable. As biological life is constructed on a protein basis, its higher forms are extremely complex, multi-dimensional and multi-tiered functional structures, the reliability of which is attained by a colossal superfluity of elements, functions and circuits of control. Fish, for example, produce millions of eggs, of which only a small number survive. Disrupted functions of the brain caused by the death of millions of neurons may be compensated for by others. Not to mention the quantitative indicators of the brain, the scale of the complexity and superfluity may be illustrated by the example of the blood circulatory system: in the body of each one of us, this circulatory system is 100,000 kilometers long in total.
It is obvious that this level of complexity and superfluity is not necessary when moving to a non-biological substrate, and the problem of reliability will be solved here by completely different means, and the range of reliability will be incomparably wider.

The mega-project of cybernetic immortality as a prospect for the transformation of earthly civilization should become a powerful experimental and creative testing ground for solving vital tasks for improving medical technology and prosthesis, extending life, deciphering the cerebral codes of mental phenomena, for developing artificial intelligence, exploring outer space, creating quantum computers, bio-robotic systems, neuro-machine interfaces, an artificial body and self-organizing systems of a new type, for realizing the colossal potential possessed by the convergent development of NBICS. We may be sure that on this path, we can expect outstanding scientific discoveries and creative achievements that cannot be foreseen today. And undoubtedly, this movement should be organically connected with the profound development of humanitarian and social issues.

After the technological solution of the final task is achieved (through a series of intermediary stages), the next period of the transformation of earthly civilization will come, and will certainly be a lengthy and extremely complex period. It will pose difficult problems of new social self-organization, transfiguration of the personality, the compliance of individual and integral intelligence, preservation of the natural world and interaction with it, and many other issues of forming neo-humanity, which we hope will nevertheless be solved – if we believe that in the coming century, earthly civilization, along with earthly intelligence, will not plunge into the abyss of oblivion.