The End of Anger

We are entering the age of the Super Empowered Angry Man. Individuals will have access to tools that give them dangerous abilities beyond anything we’ve seen so far. A frightening possibility, intelligent and focused individuals will be able to destroy cities if they choose to eventually. Biotech is of course one of the main danger areas here. And “do it yourself” bio-hackers have already engineered dangerous organisms.

This is why I feel it is so important that transhumanists not talk cavalierly about ideas such as “genocide” or ending the human race.  This is why it isn’t smart or funny to discuss  murder as a “metaphor”.

Someone out there might really be angry and disturbed enough to do this.

Once we are faced with an easy to produce but very dangerous thing we will have two choices. We can either restrict people’s power and knowledge attempting to make sure they can’t or simply don’t know how to make this thing, or we need to make sure they aren’t ever angry enough about anything to want to do use this idea to harm anyone. If we do nothing we can be essentially assured that eventually someone will be angry enough and powerful enough to do something terrible. This would be bad.

Based on our current experiences with the Internet, trying to restrict knowledge is arguably impossible. On the other hand, people are not commonly making nuclear weapons. But the situation remains a tense and dangerous balance between secrecy, access to materials, and free knowledge. Fundamentally we can not secure an easy to make yet dangerous thing. Information wants to be free. Dangerous ideas travel as fast as good ones.

Restricting knowledge of an easy to make thing would require an invasive police state of unprecedented proportions. Every person would need to be monitored at all times to make sure they were not secretly producing a dangerous thing. If we do not like this possible universe, and I don’t, we need to work on an alternative.

I don’t see any other way forward really besides making all people happier and better off. We need to end anger, erase fear, and engineer happiness. And we need to oppose people and organizations that are spreading anger and fear. I suggest that in the distant future we will literally engineer out our anger because there really won’t be any other choice. This need not be a dull mindless world with no discrimination between qualities of experience. Buddhism teaches that anger can be transformed into discriminating intelligence and wisdom. We will re-engineer our bodies and minds to be more discriminating but less angry about things we don’t like. We will produce a better and happier world because there literally will be no other choice for survival.

There has been talk about a post human world where artificial intelligence or future bio engineered non-human beings would obsolete or even destroy humanity.  I think instead we will create a world of universal benevolence. We will either prevent everyone from knowing about the dangerous thing through the rise of a global police state or create a world where anger is erased; a benevolent society where everyone knows about the dangerous thing but no one would ever use this knowledge for ill. I suggest we work diligently on this second and I think preferable outcome.

Is such a world possible? I don’t think we really know for sure but many people are able to control and manage their anger through meditation and other similar methods. Recent research into the  genetics of murderers suggests that it might be possible to alter the human genome to end murder. This is of course still quite speculative. Eliminating pollutants from our environment might also help. We now know that atmospheric lead was a major cause of escalating violent crime in the United States in the 1960s and 1970s. Future pollutants might even cause a real zombie apocalypse. 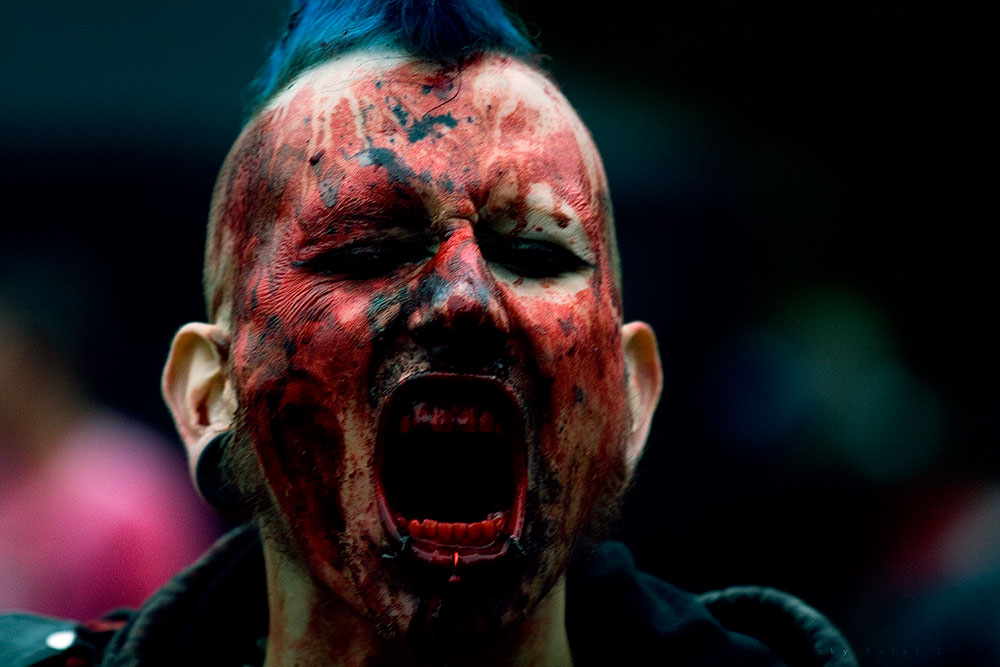 Social media also is a factor here. We see that affective states can be shared via social media and as the technology advances this will intensify. As McLuhan predicted we live an “acoustic” and intense emotional environment which happens all around us in real time. He called this The Global Village and he forecast our present tribal reality. But he never said it was going to be a good thing, quite the opposite Soon this technology will be extended with neural interfaces and the ability to measure, display and even share affective states directly. Being around angry people will become very unpleasant and anger will spread quickly when it occurs in this near future hyper social world. This might be dangerous in itself.

We need to stop. Take a deep breath. We need to turn our anger into discriminating intelligence and wisdom before it is too late.

We can do it now.