For the past few years, I have been working on a novel approach to modeling biological evolution. It utilizes a computational tool from fluid mechanics called Lagrangian Coherent Structures (LCS). This method was developed by George Haller [1] at ETH Zurich, and has been previously used in biology to study the biomechanics of locomotion in fluids [2] and the relationship between predation and ocean currents[3]. I presented on this at ALife XIII (Contextual Geometric Structures – CGS, [4]) and have a related paper (LCS-like structures, [5]) on the arXiv.The premise of this model is simple: a population of automata, with either a neural (CGS) or genomic (LCS-like) representation, diffuses across an n-dimensional flow field. As they diffuse according to local flow conditions (which can mimic environmental selection), they form various clusters called coherent structures. While they can be identified using qualitative means, there are actually highly-complex differential equations that can be used to estimate evolutionary distance and perhaps even reconstruct evolutionary trajectories [6]. However, much more work needs to be done on the simulation capabilities of this hybrid [7] evolutionary model, and as of now exists as somewhere between conceptual metaphor and bona-fide simulation. 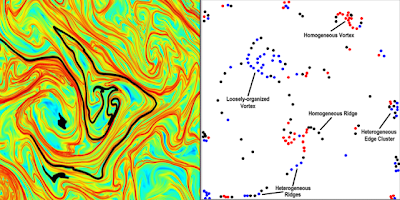 In my application, some of the equations and data structures are borrowed, and some are uniquely “evolutionary”. This allows me flexbility in terms of applying the model to many different kinds of evolutionary scenarios. One of these (identified in the LCS-like paper) is biogeography, particularly island biogegraphy. For the uninitiated, biogeography [8] is the study of population processes in a geographic context. As organisms migrate and geomorphology changes, population genetics and demography are affected in corresponding fashion.

In my LCS-inspired evolutionary model, recall that the environment consists of a generic flow field (and in CGS paper, this is already exploited as a quasi-geography). If this substrate could be replaced by a dynamic topology (e.g. a more explicit geography), the LCS-inspired model might provide insights into evolutionary “deep” time. When I say deep time, I mean a period of time long enough for uplift, continental drift, and seafloor spreading to occur and effect the distribution of populations and species.

How do we go about establishing this dynamic topology? There are a number of options here, two of which I will discuss in detail. The first is the terraforming engine used in virtual worlds such as SimCity, Spore, and Second Life [9]. The second involves using a mathematical tool called plate motion vectors to predict tectonic drift [10]. Figure 3 shown examples of each. While this has not been formally worked out, the basic goal is to create kinematics (underlying movements that govern environmental constraints) much as the quasi-flow regimes provide in the CGS and LCS-like models.

Once the kinematics of geomorphology have been established as an evolutionary field, the kinetics (e.g. how these movements unfold in time) must then be accounted for. A model of plate tectonics (the Burridge-Knopoff model, [11]) can be used to approximate tectonic activity as a series of sliding blocks that interact according to local rules. A simpler method might be to represent the buildup and release of stresses between tectonic units as a non-uniform probability density function (PDF). In any case, examples of the concept on a three-dimensional space can be seen in Figure 4.

Figure 3. LEFT: Examples of terraforming (SimCity) in a virtual world. RIGHT:Predictions of tectonic drift for the Jurassic period [see 9].

In an artificial life context, a fitness function is used to disallow diffusion of organisms and thus gene flow across cells that are either too high or too low (representing oceans and mountains, respectively). Since there is a geodynamic component to the model, these fitnesses and regions colonized can both change over time [12]. Organisms can colonize a patch of land that becomes an island or valley over time, only to be cut off from the main population with uplift or ocean floor spreading. By contrast, members of the population can evolve the ability to either live in or traverse these new environments, leading to some potentially interesting scenarios. It should be noted that agents (automata) in the LCS-inspired models reproduce asexually and have unique evolutionary dynamics, so any conclusions raised using this model should not necessarily be extrapolated to paleobiological scenarios.

What I am describing, then, is a three-level hybrid model (see Figure 5): a geomorphological model to partition and add dimensionality to the underlying substrate of evolution, a general model of particle diffusion (genetic drift), and a genomic representation that provide diversity and relatedness to the automata population. This is only a quick sketch from the Fluid Models of Evolutionary Dynamics project — if you interested in collaborating or otherwise helping develop this model, let it be known. Other comments are also welcome. 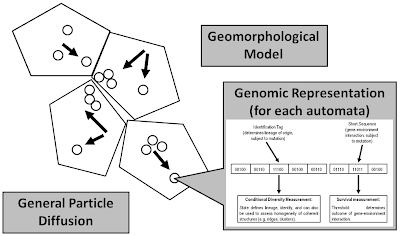 Figure 5. Diagram of the three-level model structure in context.
References and Notes:

[8] There are many relevant reviews. For an example, please see: Ronquist, F. and Sanmartin, I. (2011). Phylogenetic Methods in Biogeography. Annual Review of Ecology, Evolution, and Systematics, 42, 441-464.

[9] Here is the terraforming and ground textures documentation page from Second Life support. They use something called a .raw file, which converts a height field into a georeferenced surface (similar to digital elevation maps or digital elevation models).

[12] An important distinction: the surfaces shown in Figure 4 are not traditional fitness landscapes. Rather, these surfaces are based on elevation, which can change as the model evolves. Any fitness parameters are calculated independently of elevation, although they can be effected by elevation (e.g. uplift) or general topographic changes (new mountains, seafloor).