Writing the Future, From the Past: Mindjack.com

[Editor’s note: this article was modified to correct the misattribution of the creation of Mindjack. Apparently I need cognitive enhancement or at least more coffee.]

As we live a time of radical change, futurism rapidly becomes history. Science fiction becomes a product you can buy, then it becomes an outdated anachronism or the subject of a joke. And we will increasingly experience many and even repeated cycles of this process in our lifetimes.

Blast from the Past

Around turn of the century, during the years 1998-2005, Mindjack.com was “the beat of the digital culture”. Before phones were smart, people imagined the world of the future and they blogged about it here. Mindjack.com is an amazing digital time capsule of futurist thinking and writing from the recent past. It is just about a decade old now, but already we can feel some nostalgia for this earlier, simpler time.

It was also the dawn of a new millenium and as such a certain millennial madness was in the air  symbolized in the disaster that never happened known as Y2K. The edge of cyberculture, whatever that was, was defined by the cyberpunk aesthetic and scholarly writings on computer mediated communications. The 1995 movie Strange Days for example posited a near term future that still hasn’t quite materialized including neural interfaces and “wire heading” where reliving other people’s experiences becomes a sort of dangerous electronic drug. And then there were the terrorist attacks of September 11, 2001 that changed everything.

Fast forward. That neural interface technology from Strange Days is suddenly seeming possible today and you can buy neural controllers for your game machine. Governments are issuing reports on the economic implications of cognitive enhancements including drugs and neural implants, and seriously assessing the risks from advancing artificial intelligences. We carry supercomputers that are also tracking devices in our pockets. We strangely find ourselves poised at a similar strange moment of millennialism surrounding the infamous 2012 mythology.

The future described in the articles on Mindjack is our present. Although this was just a short time ago, we already live in a radically different world than that in which these articles were written. We would therefore be well served to take a moment and see how well some of these predictions have fared over time. Luckily, the Mindjack site is still out there a decade later documenting what people thought the future might be like. This site is a phenomenal digital artifact from the past that would be worth your time to investigate.

The New Future In the year 2000 “the future” had already arrived. Futurism was deemed “over” by many and futurist writing was labeled as essentially hackneyed and obsolete by Douglas Rushkoff in his comment to this short blog posting by Donald Melanson. But the future keeps being re-invented and people keep writing about it thank goodness.

The articles themselves are a testament to the changing times. Various authors try various writing styles, some articles are shorter and some longer, and some work and some don’t. Nothing much has changed here.

In The Telephone Repair Handbook, Mark Pesce opines on Dunbar’s Number and related ideas. The article is notable as a blog posting in that includes academic style references but is still in an easily digestible blog posting format.

Why The Digital Culture Is Good For You fails to anticipate the full scope and import of what was to become social media for both good and evil. The idea that the Internet might be used for toppling oppressive regimes is not here, nor is the idea of its use for widespread social surveillance. The full descent into the worst of human impulses that emerged online in sites such as 4chan is not predicted here.

“After years of patient development in a time of occasional wars, an architecture created by the command of a military-industrial complex alters its character. Spaces designed to resist assault become screens for the imagination, haunted by projected fears and desires. The outside world treats these places with a mixture of contempt and craving, peopling them with its demons, rebels, tyrants, and alter egos.” writes Bryan Alexander in Cybergothic. This was before the tragic events of 9-11 and is in my view more correct than ever. The world continues its slide into the high tech realization of the cybergothic imagination so well covered in this article and by Bryan on his blog Infocult. See also this posting which was written by Justin Hall right after the 9-11 attacks.

But I don’t don’t want to bias your search too much. Take a look at the site and see what some pretty smart people had to say about the present and what they imagined it might be like. Sometimes they get things right and other times hilariously wrong. Dig into this site and you will be rewarded with gems. I do hope however that you will take the time to comment below if you find anything there of  special interest to you. 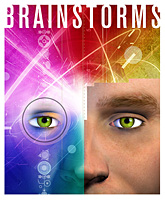 Mindjack was created by Don Melanson and Don as well as a number of the authors on the site were members of Howard Rheingold’s Brainstorms and earlier Electric Minds communities or the WELL. You’ll see a few names that you might know such as Douglas Rushkoff and Mark Pesce, but also a few others that are not well known outside of the Brainstorms community. Many of these folks are no less brilliant than their more well known co-authors on MIndjack, and these were all people that went into making Brainstorms the amazing place that it was at that time.