Here’s a 30 minute interview I did earlier this week with one of my favorite people and also one of my biggest influences, Howard Rheingold. The main subject of our conversation was Howard’s recent eBook project with TED on Mind Amplification. Mind Amplification or Cognitive Enhancement entails the use of technology such as media, search engines, social networks, search tools, and so on to make ourselves smarter. The idea of using media and technology as a form of cognitive enhancement was one of the motivational principles behind the personal computer revolution. This perspective seems to some extent have been lost today.

Howard’s eBook is therefore really a call to action for researchers and developers of media tools, software, etc. to revisit and rethink what they are doing from this new (but really older) perspective. Can we make thigns that make us smarter? What design principles should we employ to maximize the beneficial effects of these tools while minimizing negatives such as “information bubbles” and self reinforcing falsehoods? Howard’s eBook and the referenced materials provide a framework to start thinking about our new tools as extensions of our human abilities rather than replacements for them.st today; we hear more about Artificial Intelligence replacing humans than enhancing, enabling, and extending them.

Now the bad news….this was my first ever attempt at recording a Skype interview and it is a bit badly done. However I felt the content was interesting enough that it was worth bearing with my poor production to hear what Howard has to say. That is if you can understand it.

I hope you agree the content Howard touches on here is worth suffering through the poor production. In addition to the video itself below I’ve attached set of related links and resources cover soem of the ideas we talk about and which might be of interest to you as you listen.

Howard’s new eBook is best viewed in all its electronic glory as a TED app eBook.

Howard  offers a course on Mind Amplifiers from his online social media classroom at Rheingold U.

Check out the course  syllabus or dig into the amazing Knowledge Repository.

You might also enjoy Howard’s other recent book Net Smart which covers useful information and attention strategies for the online world.

The book that started it all for me was Howard’s Tools for Thought which covers the earliest days of the personal computer revolution. The coverage is from the perspective of computers as creative tools we can use to make ourselves smarter, that is mind amplifiers. Inspirational and historically important, Howard now has the entire text of the book available online. 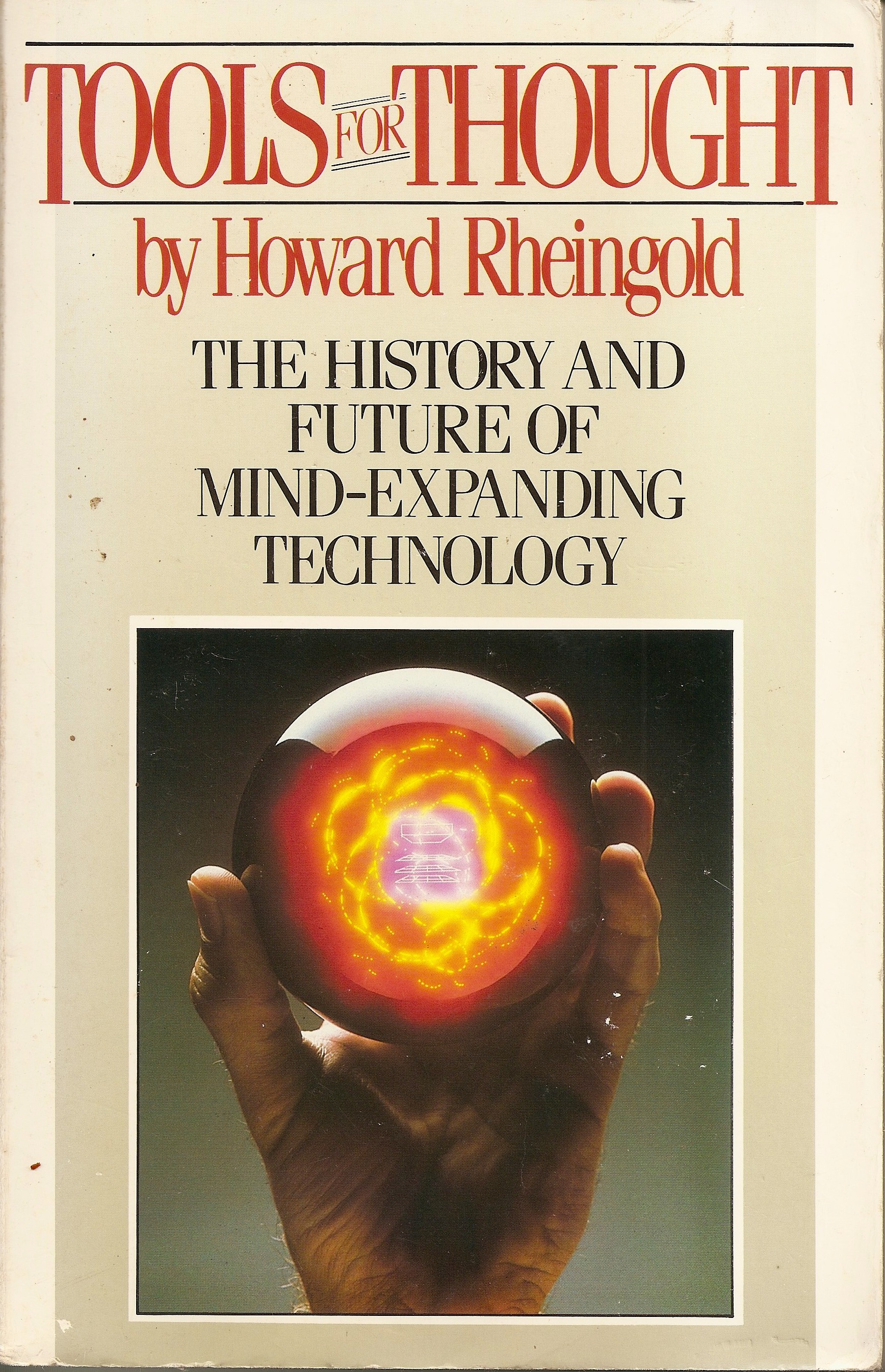 The truth about Steve Jobs and Xerox PARC

Regardless of the controversial history, Xerox PARC was one of the birthplaces of the personal computer and modern graphical user interface based on WIMP. The Alto computer was a system based around the Smalltalk language that was developed at PARC that included many of the elements of a modern PC such as windows, mouse, bit mapped computer graphics, etc. and it clearly influenced the design of the first Macintosh computer.

Internet in the Living Room circa 1983

How do you connect to the Internet from your living room in 1983?

Step 1, obtain the (not publicly available) phone number for dial up access to the University VAX network used by professors and grad students which connects to the ARPANET via UC Berkeley.

Step 2, get yourself a terminal and connect via dial up using a modem and POTS connection.

At the time ARPANET, etc. were not quite what we imagine as “The Internet” today but we had access to USENET, FTP, email, etc. and there were already servers with cracked games and other digital media of interest for downloading. You could draw a map of the entire Internet on a napkin however and most of the people using it were professors, researchers or grad students of various flavors.

At this time most normal people didn’t have a computer or terminal in their homes although personal computers were around. But even an Apple II cost around $2000 with all the gear you needed, and  I was a poor college student. Here’s how I did it.

Shown below is RadioShack VideoTex terminal I bought for $150 that I used to connect to the Internet from my living room in 1982-83. The device output to a television via an RF modulator which had U-shaped clips which unfortunately couldn’t connect to the back of the small portable black and white television I had available. So I removed the back and wired it directly into the internal antenna circuit with some alligator clips.

This provided a suitably cyberpunk look and it worked. The device included an internal 300 baud modem and a very simple 40 column line oriented terminal.

Sadly, since the terminal was line oriented,  it couldn’t run vi rendering it pretty useless for a lot of applications such as writing programs of any significant complexity. But you could debug at home from a comfy chair and USENET took on a whole new perspective when posting from home with a beer in hand. It was the future and it was good.

Before the GUI. The IBM PC XT mentioned by Howard ran the DOS operating system. Although the IBM PC had been around for a while, it was the XT that first penetrated the office environment. This was the first desktop machine used by many non-technical personnel at the dawn of the PC era and it was commonly used for applications like word processing and desktop publishing.

Some of the amazing people mentioned… The Mother of All Demos

Howard at Reed College with a neurofeedback machine, 1968.

I’m a working engineer and I do a lot of research online into new methods and algorithms for example in computer vision and machine learning. The Internet has already achieved a significant level of mind amplification for specific tasks such as technical literature research. Since i began my career I estimate that I have experienced a 1000x increase in my ability to do technical research at least. Below is a physical card catalog. This is how we used to find things we wanted to know. First you would look at these cards in a set of drawers to find the location of a book you wanted via the Dewey decimal system. Then you would head down to the stacks where the books were actually stored. Sometimes you would find the book you were looking for, sometimes not. Since the books were arranged systematically, there was a lot of serendipitous discovery. A book near to the one you were looking for might also be interesting. Also if you met someone in the stacks they were likely to be interested in similar topics to you which is why they were there alone surrounded by books. I made several friends this way in the basement of the UCSC Applied Sciences library. Google searches do not yet have these additional benefits despite the advent of social media etc.

But the bad news was it might take 30 minutes or more to locate a single book of interest and by current standards the searches were ridiculously incomplete. You almost never found what you wanted unless it was trivially easy to find anyway. Comparisons to Google Scholar searches etc. almost don’t make sense.

When I began my professional career in the aerospace industry, the company library provided me my own microfiche reader to avoid sending me hard copies of articles. See http://en.wikipedia.org/wiki/Microform I commonly collect larger collections of articles on various subjects today.

Past: Science Questions Parents Are Scared Of

Because ambient findability changes everything.

Peeragogy — turning the world into a hackerspace

Join Howard’s self organizing peer-to-peer network of self learners and DIY.