Book Review: Race Against The Machines 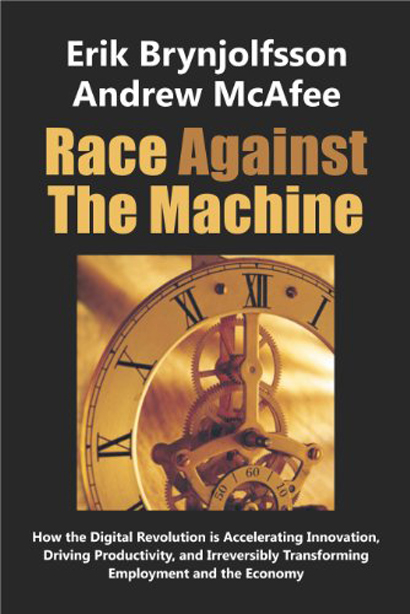 Are we on the verge of totally new social and economic paradigm brought about by the increasing power of computation in our machines?


“The root of our problems is not that we’re in a Great Recession, or a Great Stagnation, but rather that we are in the early throes of a Great Restructuring.”


So say Erik Brynjolfsson and Andrew McAfee, in their new book, Race Against The Machine: How the Digital Revolution is Accelerating Innovation, Driving Productivity, and Irreversibly Transforming Employment and the Economy.  We suppose it would be obvious to state that in the Western world, there is at present a major economic crisis that affects the livelihood of all in those countries.  As to why this is happening, that is a less obvious answer.  According to the authors, there are three main schools of thought which would explain our economic woes.

This view has been the common explanation which has explained economic slumps in the past.  This view states that the economy is simply not growing fast enough to put people back to work.  Of course if one really thinks about it, this is not really an explanation, since it begs the question as to why the economy is not growing fast enough.  This positions’s champion is Paul Krugman.  In an article published in the New York Times, on September 26, 2010, titled, Structure of Excuses, he gives his reasons.  We do not know if Krugman was referring to modern computational power as the “structural” problems he speaks about in the article, but it sounds similar.  Krugman calls structural unemployment a “fake problem.”  This structural problem espouses that Americans do not have the skills required for the jobs that are available to them.  What Krugman is debunks is the idea that there is a growing job market that requires special new skills.  He cites a report stating that there is no growth in any market, structural or not.  Another report cited by Krugman states this,

The predominant, and in our view correct, narrative to describe this situation
has been that the bursting of the housing bubble and the resulting loss of wealth led to sharp cutbacks in
consumer spending. The loss of consumers, along with financial market chaos brought on by the bubble’s burst, also led
to a collapse in business investment. As consumer spending and business investment dried up, severe job loss followed.
Further, even after economic output stopped contracting (in roughly the middle of 2009), its subsequent growth has not
been nearly rapid enough to create the jobs needed to even keep pace with normal population growth, let alone to put
the backlog of workers who lost their jobs during the collapse back to work.

This view sounds very much like the typical explanation given in major media outlets.  The last mentioned report also goes on to question the high growth of certain types of jobs.  Speaking of the this structural view the report states,

This implies that unemployment difficulties reside in the workers who are unemployed: they either are located in the wrong place or do not have the required skills for the currently available jobs. If this is so, then macroeconomic tools such as fiscal policy (spending or tax cuts) or monetary policy can not address our unemployment or long-term unemployment situation. Surprisingly, perhaps amazingly, there is no systematic empirical evidence for such assertions.

This view is championed by Tyler Cowen‘s book, The Great Staganation.  Cowen states,

…the American economy has enjoyed lots of low-hanging fruit since at least the seventeenth century, whether it be free land, lots of immigrant labor, or powerful new technologies. Yet during the last forty years, that low-hanging fruit started disappearing, and we started pretending it was still there. We have failed to recognize that we are at a technological plateau and the trees are more bare than we would like to think.

We provide here a visual explanation by Cowen of this position.  If you cannot see the embedded video, here is the link: http://youtu.be/_93CXTt2K7c.

We found it fascinating that Cowen in the middle of defending his point of view makes the following statement,

There is a second major difference between the internet and the previous arrival of low-hanging fruit, and it has to do with employment. The major internet companies perform a lot of their miracles by information technology and not so much by human hands.

Cowen seems not to see the great import of this statement.  To our astonishment, he repeats his point but via a different route,

A recent study found that the iPod—a nearly ubiquitous device—has created 13,920 jobs in the United States, including engineering and retail. That’s a pretty small number.


This new age, by his own admission is one where machines are taking the place of people in the job market.  He mentions this at several more places in the chapter but does not seem to grasp the implications of his observation.   Cowen seems to contradict himself at this point when he points out that,

At the same time that a lot of people are out of work, some of the cutting-edge companies can’t find and hire the people they need. We’re facing a fundamental skills mismatch, and the U.S. labor market is increasingly divided into a group that can keep up with technical work and a group that can’t.

This kind of argument would seem to be more in line with what Krugman calls the structural problem discussed earlier.  What Cowen does not answer is, if there is no innovative growth in American industry, then how is it possible that they are growing and cannot find the employees they need?  To us it seems, he cannot have it both ways.  We should note that Brynjolfsson and McAfee have also noted this inconsistency in Cowen’s argument.

The main thrust of Brynjolfsson and McAfee’s book is to pursue this last thesis –our traditional definition of work in society may be coming to an end.  The authors do not mean by this that innovation will end.  This argument is not new with the authors.  They give credit to Jeremy Rifkin, who in 1995 wrote a book titled, The End of Work: The Decline of the Global Labor Force and the Dawn of the Post-Market Era.  Rifkin is quoted by the authors of this book,

In the years ahead,” Rifkin wrote, “more sophisticated software technologies are going to bring civilization ever closer to a near-workerless world. … Today, all … sectors of the economy … are experiencing technological displacement, forcing millions onto the unemployment roles.” Coping with this displacement, he wrote, was “likely to be the single most pressing social issue of the coming century.

Rifkin has pursued this idea with a further book titled, The Third Industrial Revolution: How Lateral Power is Transforming Energy, the Economy, and the World.


We include a short video that will adequately explain Rifkin’s position.  If you cannot see the embedded video, here is the link: http://youtu.be/s-BLH_9MvCE.

So do the authors have an idea of how things will turn out?  Yes they take a position.  They are defending the third position.  But they are not total pessimists.

…we agree with the end-of-work crowd that computerization is bringing deep changes, but we’re not as pessimistic as they are. We don’t believe in the coming obsolescence of all human workers. In fact, some human skills are more valuable than ever, even in an age of incredibly powerful and capable digital technologies. But other skills have become worthless, and people who hold the wrong ones now find that they have little to offer employers. They’re losing the race against the machine, a fact reflected in today’s employment statistics.

We heartily recommend this well reasoned and well documented book for your purchase.  It deals with issues that are vital to the future of the human race.

This article was originally posted at the PlusUltraTech blog.