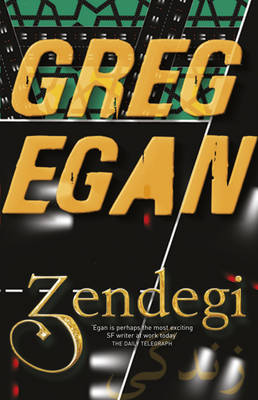 ). I bought it a few minutes after midnight on January 1: I had decided to begin the new decade by reading this e-book. Some explanations and thoughts before starting with the review:

I don’t own a Kindle

device yet, but my HTC Desire HD phone has a screen big enough to read comfortably, and the Kindle reader is available for most platforms including Android. This was one of the main reason why I selected this phone, but I will also buy a dedicated Kindle device because I will mainly buy e-books. We have been talking of e-books for 20 years, but e-books never seemed ready to overtake paper books. This is changing very rapidly now, and it appears that  e-books will soon become the norm. This is frequently the case for emerging technologies, they often need more time than expected to take off. In Zendegi, Egan describes the early development stage of very advanced mind uploading technologies which, of course, at the beginning do not work well enough for practical use. But these things do change, and they can change quite fast after reaching critical thresholds of performance, usability and acceptance.

Science fiction writers and futurists have been criticized for making very wrong predictions. When we were kids, our generation “knew” that in 2011 we would have flying cars and holidays on Mars. Looking back, it is easy to see why this future did not happen. But I have a magic device in my pocket which can hold thousands of books which I can read where and when I want. With the same device I can talk to most people on the planet, take pictures and upload them to social networks, send email, surf the web, see where I am on a map, stream video, play games, post to Twitter and edit my blogs. We are in the future! It is not the same future that science fiction writers predicted in the 60s, but perhaps it is even stranger and more interesting. Sooner or later, and I hope sooner, we will also have cities on Mars (flying cars I can do without).

Greg Egan is one of my favorite science fiction writers. In some novels like Diaspora, Schild’s Ladder and Incandescence he explores the very far future, and in others he stays closer to the present. At times, Egan also makes some very optimistic predictions. For example in Permutation City, he places the first successful tests of mind uploading in 2026, which seems quite over-optimist from here. But he is not blindly in love with technology gadgets and never forgets that the evolution of science and technology takes place in a very complex social, cultural and political context which at times can speed development up, but often slows it down (remember those cities on Mars).

Actually Egan, an author loved by many transhumanists, is not overly fond of his transhumanist fans. See Greg’s many comments to Russell Blackford’s article on “Transhumanism still at the crossroads” (a recommended reading which goes to the heart of the tension between different interpretations of transhumanism), but be prepared to read things like “I consider a self-description of “Transhumanist” to be a useful filter to identify crackpots...”.  In other comments, though, Greg defends the feasibility in-principle of mind uploading: “I certainly don’t imagine that any worthwhile form of uploading is imminent, but that it is impossible in principle is a much larger claim… To render the most sophisticated forms of uploading impossible for all time, you really have to insist that only the precise biochemistry of the human brain can give rise to human subjective experience.” There are many other interesting comments, including one saying that, if Egan wasn’t such a good writer, less people would join the evil transhumanists. See also this Lesswrong post. Mature uploading technologies are described in Diaspora and other novels set in the far future, but in Zendegi Egan explores early developments.

Much of Zendegi takes place in Iran (see Egan’s notes on his trip to Iran when he was writing the novel). In 2012, the Australian journalist Martin is in a politically troubled Iran at a time of major changes, and the young Iranian refugee Nasim is in the US working as a computational neuroscientist in the Human Connectome Project. 15 years later, both Martin and Nasim live in Iran. Martin is married to a woman he met in the first part of the book, and they live with their young son Javeed. Nasim has returned to Iran soon after the events in 2012, to be part of the change, and now works at the popular virtual world Zendegi, a Second Life on steroids powered by very realistic virtual reality technology. It is interesting that Zendegi is a local company, and their main competitor is an Indian company. It is also interesting that most Iranian characters, in 2012 and 2027/28, are good and decent persons. Not that I had any doubts, but seeing a good science fiction novel set in a country currently demonized by the media is refreshing.

Zendegi has financial problems and is losing market share to its competitors. Nasim realizes that her old colleagues at the Human Connectome Project have achieved important advances and released a large database of high resolution brain scans of thousands of volunteers. The data are not sufficiently detailed and personalized for individual mind uploading, but they can be used to build accurate generic models of human minds (the models that we use to call “mindware” or “me-program” in uploading discussion groups). Nasim understands that these advances may permit developing better technology for Zendegi, and she turns to her old connection Nate Caplan for funding.

Caplan is an extropian entrepreneur, a mind uploading enthusiast and a transhumanist cliché. When he first meets Nasim in 2010, he introduces himself as “My IQ is one hundred and sixty. I’m in perfect physical and mental health. And I can pay you half a million dollars right now”, quite in line with Egan’s unforgiving opinion of transhumanists. Egan has been accused of being mainly an epic writer who under-develops his characters. It is not always so, for example Martin and Nasim are real persons, like many characters in other novels such as Teranesia, but Caplan is really a fake in black and white: I have met some monomaniac transhumanists with an inflated opinion of their intelligence and worth, but Caplan is far too extreme for a believable character. There is also a parody of the Singularity Institute, the “Benign Superintelligence Bootstrap Project”, busy at building a godlike Friendly Artificial Intelligence with the billions left to them by a very wealthy donor. Of course transhumanist clichés are primadonnas unable to work together and never agree on anything, and Caplan is very much against the Superintelligence Project. He wants to achieve personal transcendence through uploading, and sees their schemes as conflicting with his.

Javeed is an avid Zendegi user, and when Martin becomes terminally ill he asks Nasim to upload him to Zendegi so he can continue to be present in his son’s life. Martin does this only for his son, and he does not really believe that he may actually continue to live in Zendegi, or at least he never says so. The uploading technology used, more appropriately called “sideloading”, consists of tweaking and fine-tuning a generic mindware “me-program” obtained by the Human Connectome Project, with long and involved training sessions, until it behaves like a specific person. Nasim and Martin do not see their sideloading project as a means to actually preserve Martin beyond physical death, and only want to build a credible emulation for Javeed. But Caplan supports the project because he sees sideloading as a precursor of uploading and personal cybernetic immortality

I should not give spoilers here, but you have probably guessed that this story does not have a happy ending. Nasim and Martin do their best, but Martin’s copy never becomes good enough for its purpose, and the book ends with sad thoughts of Nasim after Martin’s funeral. The project has failed, and sideloading technology is not yet good enough to permit preserving people after death. In the meantime Caplan’s attempts at biological life extension have made him ill, and he decides to spend a few decades in cryonic suspension waiting for better technologies. Even though the Benign Superintelligence Bootstrap Project has not produced any result, their premises in Houston have been bombed by terrorists. Perhaps because the publicity given to other sideloading projects at Zendegi (more limited in scope but more successful) has made people realize that these projects may actually produce results, and somebody (perhaps Caplan himself) has wanted to cripple them.

The tragic end is already expected by the reader and does not come as a surprise. Egan knows that the development of disruptive technologies is never easy, never linear, and always troubled. I think uploading technology will be developed eventually, perhaps in the second half of this century, but I am afraid Greg is right, and in the early development stages there will be unexpected problems and major setbacks, there will be unhappiness, and there will be tragedies. But, fast forward a few centuries to the upload society in Diaspora, this is how the “Introdus” to a next phase of our evolution might begin.

And, in fact, the novel ends with a positive thought: “Maybe in Javeed’s lifetime a door could be opened up into Zendegi-ye-Bethar; maybe his generation would be the first to live without the old kind of death. Whether or not that proved to be possible, it was a noble aspiration.”